Following up on our previous post CTA’s Westchester Branch – What Might Have Been, we decided to scout out the old right-of-way, more than 63 years since the last trains ran, to see what we could find.  Fortunately, there are many traces of the old line that are still visible.

For your consideration, we present some modern-day shots of the same locations where “L” trains once ran, both along the CA&E main line and the Westchester branch.  If you ever decide to go exploring, to see these areas for yourself, we hope our efforts will give you a bit of a “leg up” on the work.

Interestingly, one entire half-block where the Harrison station once was, remained vacant land as late as 2011.  This has now been developed, and we have some “before and after” pictures for comparison.

Since there are so few streets that cross the former Westchester right-of-way south of I290, it would appear that some housing was built adjacent to the line even before abandonment in December 1951. The line still being in use would provide a logical reason for keeping new grade crossings to a minimum.

If the CTA Blue Line is ever extended west to Mannheim Road, it would cross the old Westchester right-of-way very close to this spot.  If a station is built there, that would be even more ironic.  Someday you may be able to take a CTA rapid transit train to much the same location that you could in 1951, but not since.

You might think that the CA&E followed a straight path to the DesPlaines terminal, but such was not the case. Heading east from First Avenue, where the Illinois Prairie Path ends now, it actually headed southeast before turning east and crossing the DesPlaines River where I290 does today, then connecting with the terminal from the south.

Approximately the same view as image 194 in our last post (showing a Westchester car heading west, crossing First Avenue). The old Refiner’s Pride gas station has long since been replaced by an oil change shop.

Looking southeast from First Avenue. The CA&E tracks headed through this area, before turning east to cross the DesPlaines River. There were also some storage tracks in this area, now occupied by Commonwealth Edison. 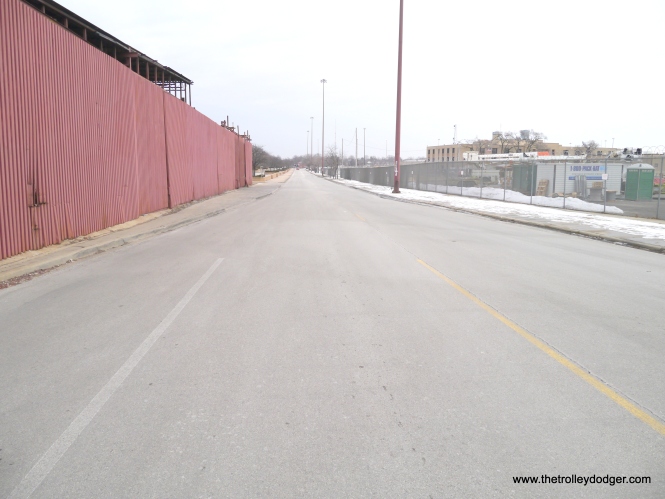 Looking east from First Avenue. The CA&E right-of-way veered off here to the right, while the Chicago Great Western freight line went straight ahead. Some years ago, a new bridge was built where the CGW crossed the DesPlaines River, for pedestrian and bike traffic.

The Illinois Prairie Path begins at First Avenue in Maywood. We are looking west.

We are looking east from 6th Avenue in Maywood, about the same view as seen in image 181 in our previous post (showing the CA&E 5th Avenue station). 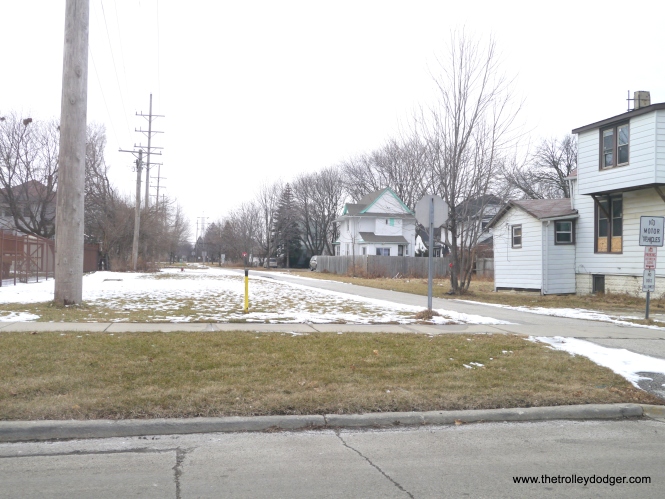 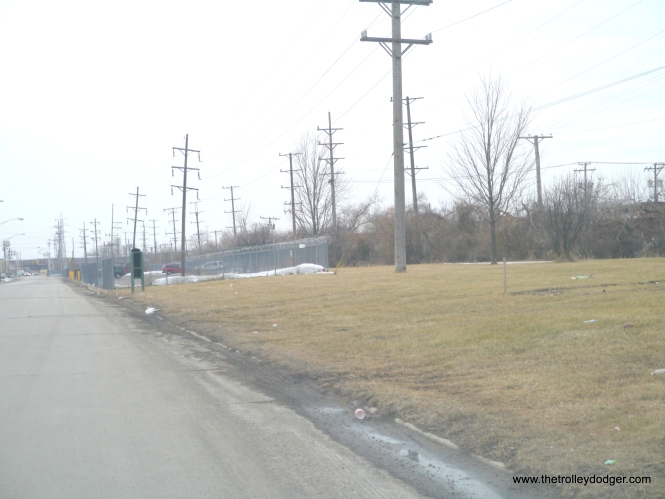 Looking east from 25h near Madison, where a former CA&E station was located.

Looking west from Madison and 25th. Some of the same high tension lines are visible in image 196 in our previous post.

The Illinois Prairie Path, at right, follows the right-of-way of the Chicago, Aurora & Elgin interurban.

Where the CA&E main line once crossed under the Indiana Harbor Belt RR. Since the railroad was scrapped in 1962, some concrete walls have been erected.

The Westchester line branched off from the CA&E main line near the top of the picture, then curved to the south to fololow a path between Marshall and Bellwood Avenues. This was approximately the location of Mark Drive, which is designated as a street for a short stretch, but is mostly an alley. From Jackson it headed south, and there was a station at Harrison just west of Bellwood Avenue.

An exception to the rule that you can follow the right-of-way via the telephone poles. These connect with the ones that follow the Westchester line, but the tracks were actually a bit west of this location on Madison Street (as can be seen in some of our other photos that show the actual location).

This house can also seen in image 199 in our previous post, in a photo showing a Westchester car crossing Madison Street.

The Westchester line crossed Madison at approximately this spot, where the house in the middle of the picture is now located. From here, the track curved off to run to the west of Bellwood Avenue.

Looking southeast at the old Westchester right-of-way, at Monroe between Bellwood and Marshall Avenues. 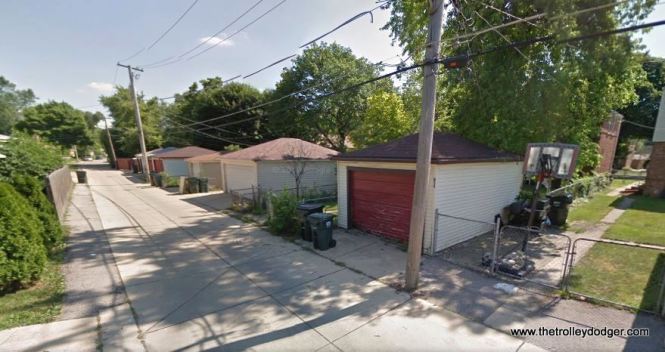 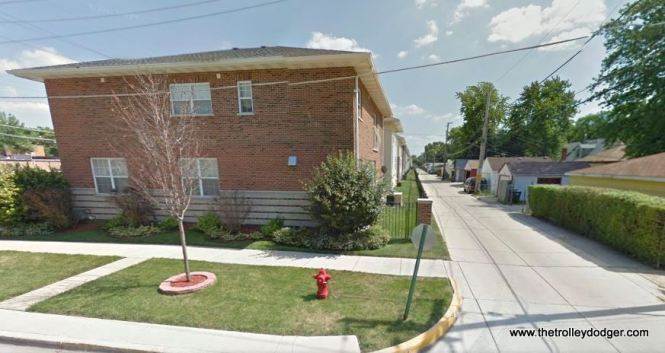 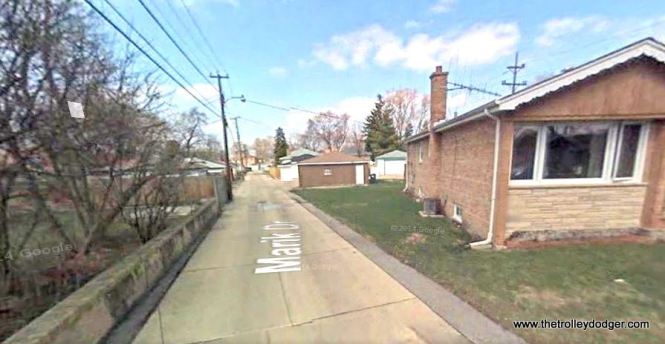 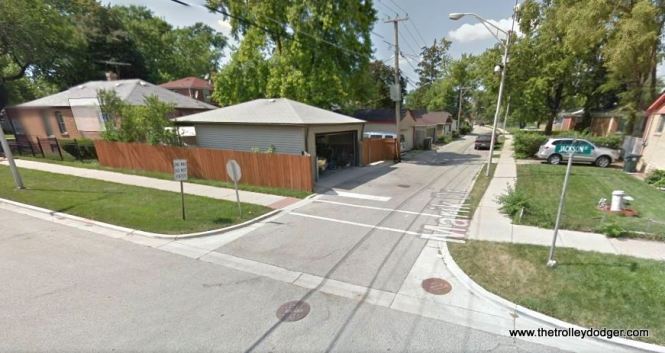 Part of the old Westchester right of way has been turned into “Park Place,” which appears to be a new street. 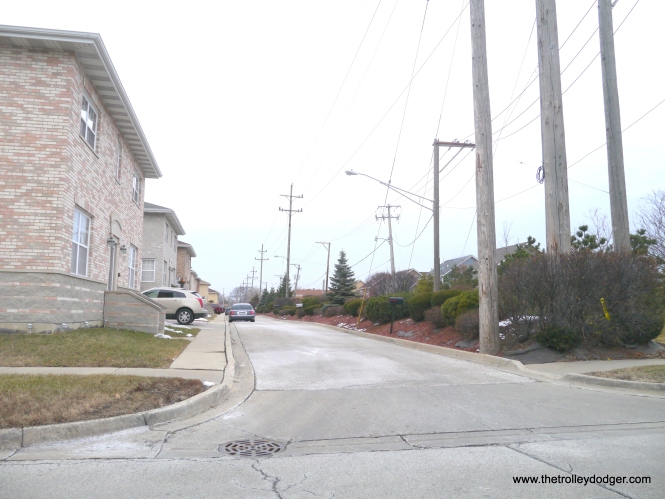 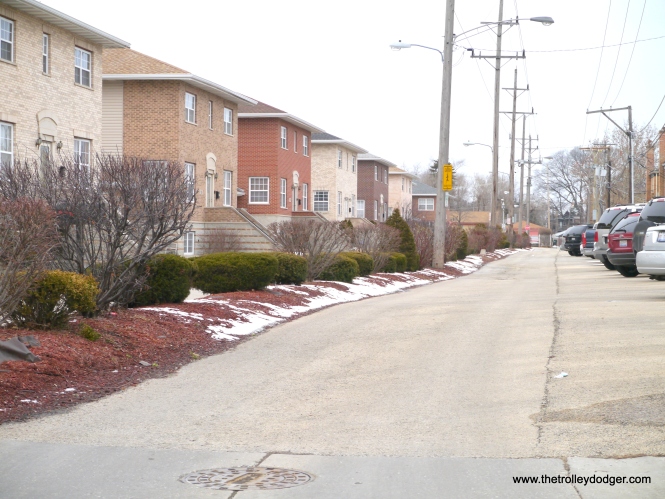 Bellwood Estates, as seen from the corner of Bellwood Avenue and Harrison, just north of I290. This development was not here in 2011.

Looking south from Van Buren. The new Bellwood Estates development is at left.

Looking south at the old Westchester right-of-way from Van Buren in 2011. The tracks followed the alignment of the telephone poles. This area has been built up since then.

This 2011 view of the then-empty half block at Harrison and Bellwood, looking much as it had 60 years earlier.

Undeveloped land near the old Harrison station, as it appeared in 2011 prior to the construction of Bellwood Estates.

Bellwood and Harrison in 2011, before the construction of Bellwood Estates.

After crossing where I290 is today, the Westchester branch headed south and ran alongside the eastern edge of what is now Gladstone Park. The line went under the Illinois Central tracks and there was a station at Roosevelt Road, along with a couple of storage tracks.

The right-of-way looking north from Kitchner Street in Westchester, just south of I290.

Grace Central Church on Kitchner Street in Westchester, some of the construction that has built up in the area since 1951. 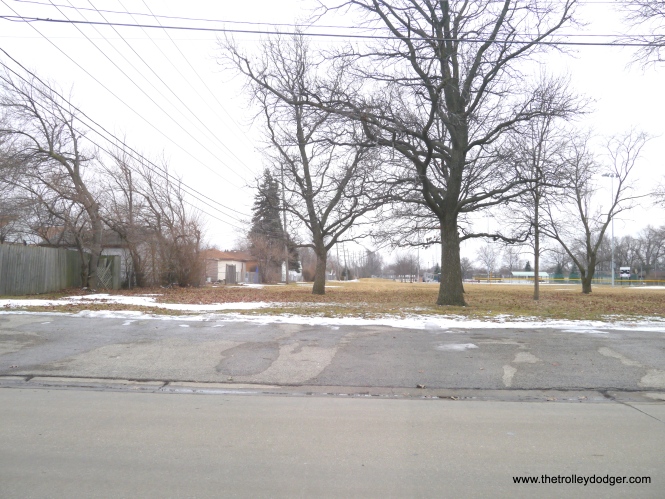 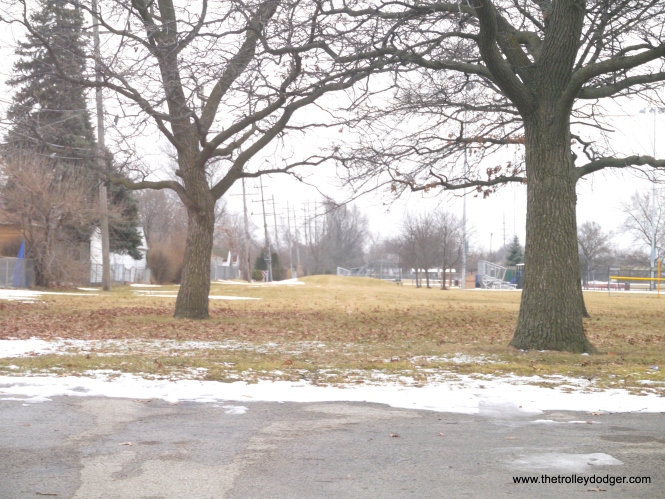 In places, it is only possible to follow the path of the old right-of-way via telephone poles.

Looking north from the IC underpass. 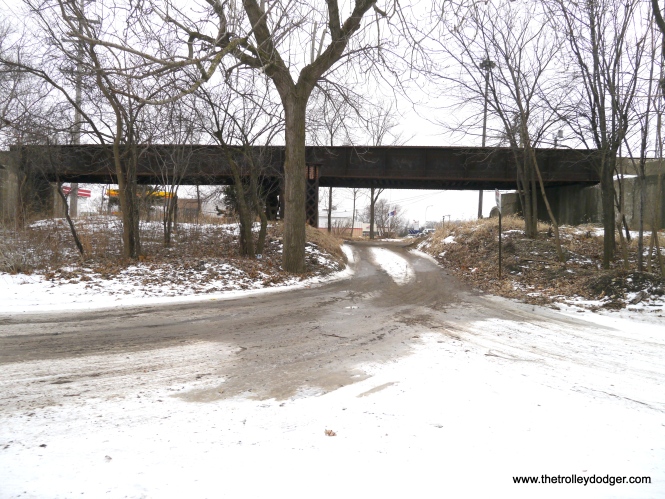 A dirt road passes under the partly filled-in Illinois Central underpass. We are looking south.

The Illinois Central underpass, as viewed from the south.

The partially filled-in underpass that once took Westchester trains under the Illinois Central.

Here, the line continued to run south between Balmoral Avenue and Westchester Boulevard. 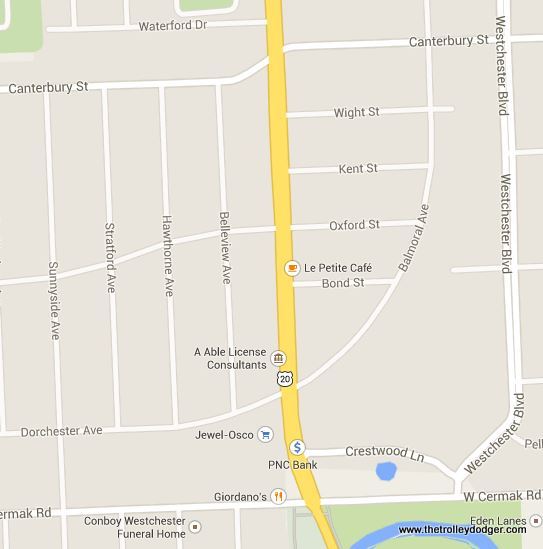 Finally, heading south past the station at Canterbury, the line curved to the southwest, following the general alignment of Balmoral Avenue until ending just short of Mannheim and 22nd. Insull planned for eventual extension west from this point to what we now call Oakbrook.

The #317 Pace bus stops at the exact location of the former Westchester rapid transit station at Canterbury.

The right-of-way looking south from Canterbury. 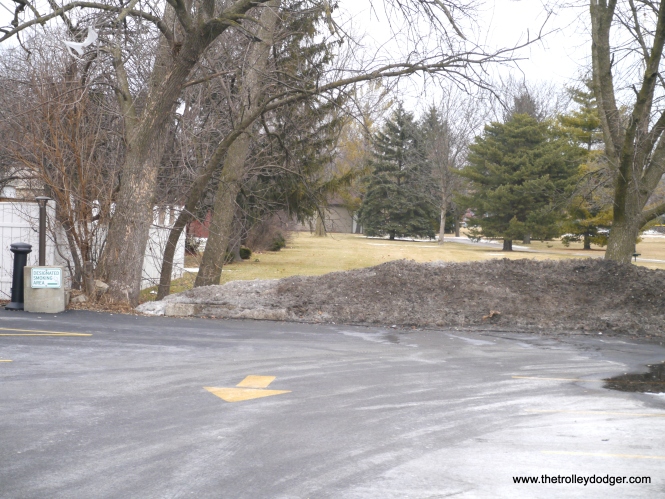 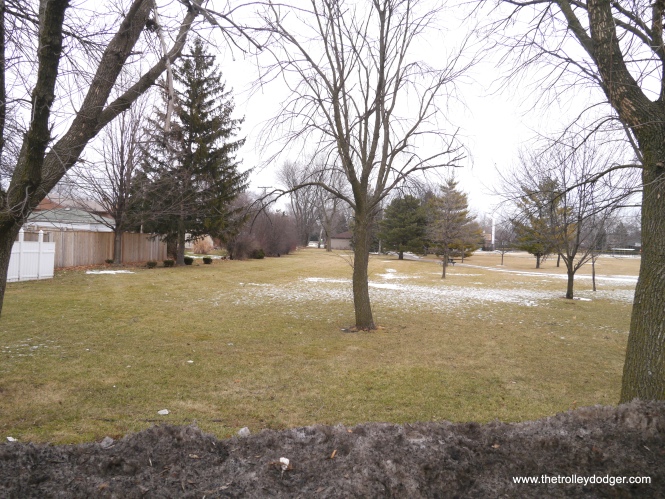 The Westchester right-of-way near Mannheim and 22nd Street, looking north.

A bank now occupies the end of the Westchester line at Mannheim and 22nd Street.

Bill Shapotkin writes:
It is interesting to see that the idea of looking at the r-o-w (such as the Westchester ‘L’) is not just my own personnel domain anymore. We can still learn a lot about the past by reviewing the remains of the present. (I especially like the before/after photos of the same house on Madison St in Bellwood (shown below).)

Kudos to you, Dave.
A few thoughts concerning the Westchester ‘L’ as it relates to the present-day: Some time ago, a fellow wrote (in a thread to this group) how the Westchester ‘L’ is missed (by the present-day residents) today. Not so — but just how are the residents of the area served today?
PACE #317 (successor to CTA #17) http://www.pacebus.com/pdf/schedules/317sched.pdf operates hourly (thirty minute rush) betw Des Plaines Ave and Balmoral/Canterbury. Service does NOT begin until later in the morning and does NOT run late into the evening. That said, on Weekdays/Saturday, PACE #303/310 http://www.pacebus.com/pdf/schedules/303sched.pdf and http://www.pacebus.com/pdf/schedules/310sched.pdf provide twenty-minute service as far west of 19th Ave — AND there are those two late-night trips (what would otherwise be pull-in trips) that cover the route west along Madison St.
It appears that whatever REAL traffic potential along the route of the ‘L’ is along Madison St — NOT in Bellwood or Westchester.
That said, PACE #301 http://www.pacebus.com/pdf/schedules/301sched.pdf  now provides frequent (thirty minute or better) along Roosevelt Rd on Weekdays/Saturday and forty-five minute service on Sunday. Of course, this also provides service along a route one mile south of Madison St and provides better west-end destinations (Hillside Mall (at least what is left of it), Oakbrook and (on weekdays), points along Roosevelt as far west as Wheaton. Wow! I can recall when this was a weekday-only route (on a sixty-minute headway) betw Des Plaines Ave and Hillside — and did not operate after 7:00 PM.
Further south, PACE #322 http://www.pacebus.com/pdf/schedules/322sched.pdf operates on a thirty-minute headway (Weekdays and Saturday) and hourly on Sunday (Sunday being the only real hours-restrictive  portion of the operation. Like the #301, there are good west-end destinations (Oakbrook and Yorktown).
Sadly, the north-south service of PACE #330 http://www.pacebus.com/pdf/schedules/330sched.pdf has not lived up to (what I believe is) its full potential. If the route served the Midway ‘L’ (instead of Archer/Neva) on its south end and actually served Metra’s MILWW line on a full-time basis (i.e.: served the Franklin Park (instead of the Mannheim) station), it would have a lot more of a following — and the corresponding service levels that the other routes now serving the area now have.
I believe many of us (and I include myself to a certain degree) have rose-colored glasses on when we look at some of the long-gone rail transit services. It appears to me that the present-day routes actually serve the are better — providing service to where people actually live and/or where they want to travel, which sadly the ‘L’ would not be able to do.
Slowly but surely (heavy on the slowly, light on the surely), I am documenting the Westchester ‘L’ and its present-day bus replacement services. Good Lord willing, this documentation will be completed later this year. When completed, the program will be offered to any interested group (such as CERA or OSA) for public viewing.

2 thoughts on “The Westchester Branch – What Remains”