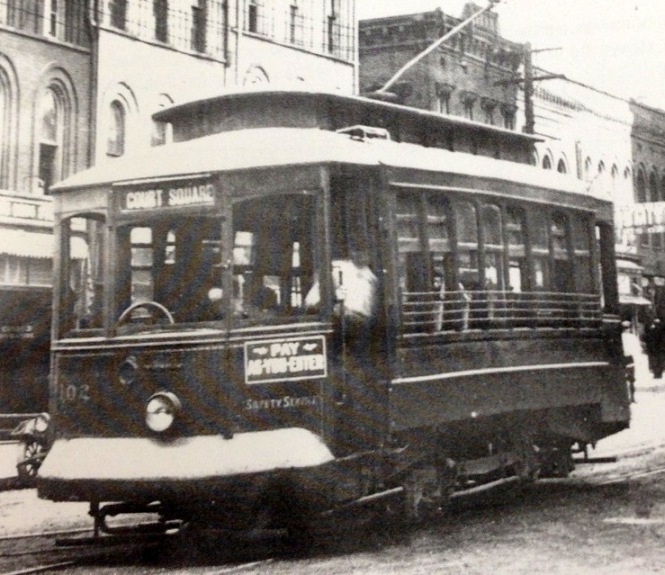 I was born and raised in Jackson, TN. The trolley car photo attached was owned and operated by the Jackson Railway and Light Company.

Can you help me identify the manufacturer, model, year and color scheme? My guess is a Brill about 1918.

Thanks for writing. My initial search did not turn up much, but we will naturally keep looking. This must have been one of the smaller properties. There doesn’t seem to be anything about it on Don’s Rail Photos.

There is a mention in a 1916 issue of Electric Railway Journal that Jackson Railway and Light Company was in the market for a couple of one-man car bodies.

Chances are one of our readers will have an answer. That does look like a Brill, however. (Editor’s note: see comment below by Frank Hicks, which provides an answer.)

I’m president of a group called Logan Square Preservation and I’m also putting together an exhibit and book on the history of the neighborhood. I found the attached photo on your site and would like permission to use it. We would, obviously, credit you for the image’s use.

If you’re interested, I may also be able to share some photos in our archive of trolley cars in the neighborhood – we have a few – one in color.

Naturally, we are glad to allow such a use, thanks. (The photo in question, reproduced below, originally appeared in our post Chicago Streetcars in Black-and-White, Part 5 (April 18). His group likes this picture so much that they may use it on the cover of their upcoming book.

(This is the photo Mr. Schneider referred to.) CSL 3204-3206 and 3228 on Milwaukee in 1928. Andre Kristopans adds, “Milwaukee looking north at Logan Blvd, from middle of Logan Square. Very rare shot of trains.”

Mr. Schneider, in turn, shared a couple photos with us: 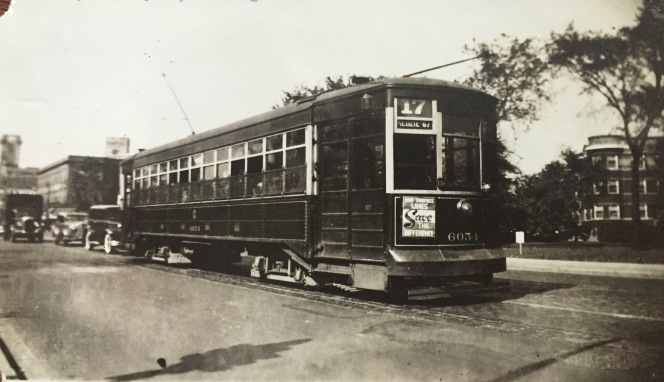 A while back, Frank Hicks wrote:

I’ve been enjoying tremendously the CSL photos you’ve been posting on your blog; thanks for putting all of these great photos online!

I am writing because I am working on historical articles about two of the CSL cars in the IRM collection, the two ex-South Chicago City Railway cars, 2843 and 2846. I’ve completed a draft of an article about the 2843 that also describes the SCCR lines on the southeast side, and my hope is to follow it up shortly with an article about the 2846 that focuses more on the interstate routes over the Hammond Whiting & East Chicago. My question for you is, do you have any photos of either the 2841-2845 series Jewetts or the 2846-2856 series “Interstates”? I’m especially looking for photos of these cars in passenger service (pre-1932) but photos of IRM’s cars in work service (CSL 2843 and 2846, later CTA AA95 and AA98) would also be useful. And I’m in search of any photos of South Chicago City Railway cars prior to the CSL unification, including earlier single-truckers.

Anyway, any help would be greatly appreciated. Thank you for your time!

The article on CSL 2843 appeared on the excellent Hicks Car Works blog on April 9. At that time, we didn’t have anything to contribute, but a couple things have turned up since.

I’m just starting to work on an article about the 2846-2856 series “Interstate” cars and I’m definitely on the lookout for photos of those cars. The cars of that series that were put into salt car service were renumbered AA98-AA107.

Here are the photos we found showing cars in those two series: 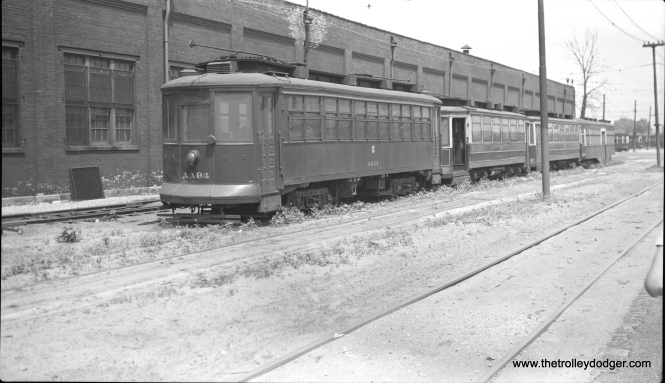 Don’s Rail Photos says, “2844 was built by Jewett in 1903 as South Chicago City Ry 324. It became Calumet & South Chicago Ry 829 in 1908 and renumbered 2844 in 1913. It became CSL 2844 in 1914 and was later converted to service as a supply car. It was renumbered AA-96 in 1948.” The Hicks Car Works article on car 2843 says, “In October 1942 one of the Jewetts, car 2844, was rehabilitated at South Shops and sent to Burnside car house for service. The station superintendent there wanted nothing to do with the car; even as stretched as the Surface Lines was, an aged car poorly suited for one-man operations was not what was desired. So the car was sent back to South Shops and the decision was made that the Jewetts instead would be converted into salt cars. ” So this photo may date from that brief period late in 1942 when this car was put back into service after having been in dead storage for a decade.

CTA work car AA101 at South Shops on June 14, 1955. According to Frank Hicks, this car was probably CSL 2849. It was originally built by South Chicago City Railway in 1907 and was a sister car to 2846, which is preserved at the Illinois Railway Museum.

Reading through CERA bulletin #146 for a second time, I noticed that the caption on page 298 says the trackage on Halsted south of 120th St. was used by the Chicago & Interurban Traction Co. This contradicts what I know about the interurban trackage.

I still insist I am correct that the interurban line went south on Vincennes rather than Halsted. Reasons:

(1) See http://www.chicagorailfan.com/maptinik.html . The route shown on this page is Halsted to Summit to Vincennes.

(2) See http://donsdepot.donrossgroup.net/dr3137.htm . Here is the relevant sentence from that text: “C&IT interurban service continued from the south side Englewood Elevated Station at 63rd and Halsted (trackage in Chicago was leased along with the shops at 88th and Vincennes) to Kankakee.”

(3) See http://www.chicagorailfan.com/maptcit.html . This map shows the entire route to Kankakee.

(4) Vincennes Ave. goes south into Blue Island. From there, Western Ave. heads south, but soon becomes Dixie Highway, which at one point ran all the way to Florida. Present-day addresses in Google have Dixie Hwy. in Chicago Heights, so it would seem Dixie Hwy. (and the Kankakee cars) went southeast from Blue Island through Harvey, then south through Chicago Heights and Crete.

(5) South Suburban Safeway Lines was formed in 1933 (see http://www.chicagorailfan.com/histcit.html ). That company ran two bus routes from the 63rd and Halsted L station. One went to Harvey, going west on 63rd, south on Western through Blue Island, then south on Dixie Hwy., to Harvey. The other ran straight south on Halsted (with a slight jog to the west in Harvey to meet other routes) to Chicago Heights and Crete. The two bus routes were put in place to replace the interurban.

All of which leads to the question: What line used the trackage on Halsted south of 120th? I have no answer. The Riverdale streetcar ran along Michigan Ave., not Halsted. And the Chicago Surface Lines never ran streetcars on Halsted south of Summit (which meets Halsted at around 85th St.). Perhaps the trackage viewable on page 298 is a stub that may have been used as a terminal by red cars on either the State St. line or the 119th St. line. Or maybe there was a freight customer south of 120th St. Just some guesses.

That’s an interesting question. You can view a map of the Chicago & Interurban Traction Co. here.

Firstly, I do not think there is any dispute of the Kankakee Interurban’s route out of Chicago, namely Halsted, Summit, Vincennes, 127th, Western, Spaulding (alongside GTW), Page, 154th, Park, 157th, PROW to 161st/Halsted then south on Halsted.

Now the matter of the Halsted track: Apparently at one point in history (1890’s) the routing on 119th St instead of continuing west to Vincennes just went to Halsted and then south to 121st. Possibly the intent was to continue to 127th or further, but a crossing of the IC Blue Island branch seems to have become an insoluble problem, and besides, the industrial area along 119th between Morgan and Ashland must have looked a whole lot more inviting and the Halsted track simply fell into disuse, but was not actually taken up for many, many years.

To give our readers an idea of the general area M. E. is talking about, here is an enlargement of a 1941 CSL track map:

Here is a rare photo of the Chicago and Joliet Electric, which provided a connection between the Chicago Surface Lines and the Chicago, Ottawa & Peoria:

Chicago and Joliet Electric Railway #242, shown at the Archer and Cicero station in Chicago in September 1933. (Robert V. Mehlenbeck Photo) Mehlenbeck was member #11 of Central Electric Railfans’ Association. According to Don’s Rail Photos, “242 was built by Cummings Car & Coach Co in 1927.” Service on this line, which connected to the Chicago, Ottawa & Peoria, was abandoned on November 16, 1933.

Finally, we will close with three very rare images of the Chicago, Ottawa & Peoria, which became a division of the Illinois Terminal Railroad and which was abandoned in 1934: 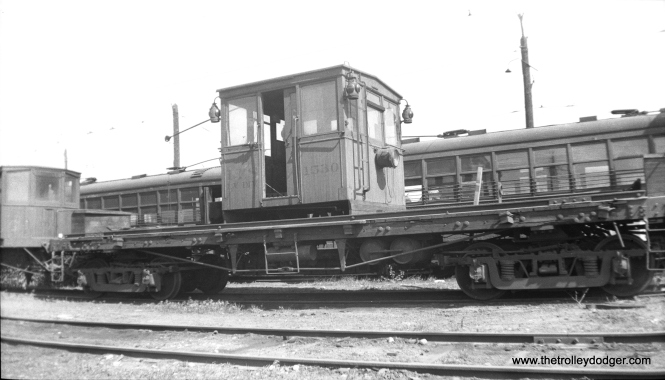 CO&P freight motor 1530 at the Ottawa Shops in 1934. According to Don’s Rail Photos, “1530 and 1531 were built at the Danville shop in 1914 as kits which were then assembled at Ottawa. These were so-called pull cars which were used as locomotives.” 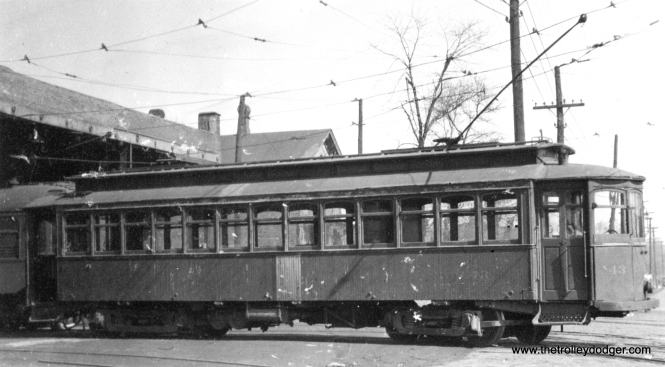 CO&P city car 43 at the LaSalle Car Barns. Don’s Rail Photos says, “41 thru 44 were built by American Car in August, 1905, as trailers for the Aurora Plainfield & Joliet. They were sold before delivery to the CO&P where they were motorized.”