Milwaukee Electric 1121 crosses the Chicago and North Western on a 1949 fantrip over the North Shore Line. It even has a Skokie Valley Route sign on it.

Our last post featured the Kenosha streetcar, which has been running now for 15 years. Milwaukee is planning a streetcar line of its own, and may begin construction next spring.

Today, we pay tribute to this rich traction history with a selection of classic photos showing Milwaukee streetcars and interurbans. Much of the information we are sharing about these railcars comes from Don’s Rail Photos, an excellent online archive. Don Ross has been collecting photos since 1946 and if you have not yet checked out his web site, I hope you will do so.

Milwaukee once had an interurban system, part of which was called a “rapid transit” line. The last vestige of this once-great system was called Speedrail.

Speedrail was a valiant effort to keep service going on a shoestring, in an era before government funding for transit. Unfortunately, there was a horrific accident on September 2, 1950 that led directly to the end of the interurban on June 30, 1951. That this crash was involved a train full of railfans, many of whom had come to Milwaukee from out of town to attend a convention, made things even more tragic. Jay Maeder, head of Speedrail, was at the controls of one of the two trains, which hit head-on on a blind curve. The exact cause of the accident was never determined. You can read more about it here.

Milwaukee’s last streetcar ran in 1958. If you would like to hear the sounds of Milwaukee streetcars in action, you may be interested in our compact disc of Railroad Record Club LPs #35 and 36, which you can find in our Online Store.

This Hi-Fi recording, made in the 1950s, has been digitally remastered and sounds great. It is paired with additional vintage recordings of the Chicago, North Shore and Milwaukee, Chicago, Aurora & Elgin, plus the Chicago Transit Authority’s Garfield Park “L”.

When the Illinois Electric Railway Museum, then located in North Chicago, purchased a Chicago, Aurora & Elgin railcar after the “Roarin’ Elgin” was abandoned, the suggestion was made to use a CA&E car on a North Shore Line fantrip. And although an inspection showed that the CA&E car was, most likely, in better shape than some of the CNS&M’s existing rolling stock, IERM was unable to get permission to use the car, and this historic opportunity was lost.

However, about a dozen years before this, a similar sort of trip was run, when Milwaukee Electric interurban car 1121 ran on a fantrip over North Shore Line trackage. We are pleased to offer three photos from that trip in this post.

According to the book Kenosha on the Go, by the Kenosha Streetcar Society, page 79, this fantrip took place on Sunday, December 4, 1949, with North Shore motorman Howard A. Odinius at the controls. It had been 27 months since the abandonment of the MRK (Milwaukee-Racine-Kenosha) interurban line of KMCL (Kenosha Motor Coach Lines), which ran to downtown Kenosha. (Speedrail ran service to Waukesha.)

You can read Don Ross’ account of the fantrip here.

After Milwaukee lost its streetcars, the era of traction continued there until the North Shore Line quit in 1963, and the last Milwaukee trolley bus ran in 1965. Now, the Illinois Railway Museum has a variety of Milwaukee equipment in its extensive collections.

Let’s hope events in Milwaukee are gaining traction, and not losing it.

Milwaukee Electric car 1121 and an Electroliner near Racine on the 1949 North Shore Line fantrip. Don’s Rail Photos adds, “1121 was built by Kuhlman Car in February 1909, #405. It was rebuilt in 1927. It was equipped with GE-207B motors to allow it to pull trailers. In 1949 it was found to have the best wheels, and thus it was selected for the fantrip on the North Shore Line to Green Bay Junction near Rondout. It was also used as a freight motor after the last regular freight motor was wrecked in 1950.” 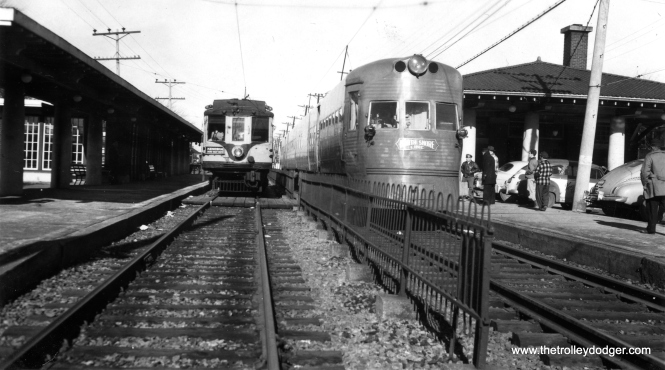 Milwaukee Electric car 1121 alongside an Electroliner (probably 803-804) at the Kenosha station. This was a 1949 fantrip where a TMER&T car was operated on part of the North Shore Line.

Don’s Rail Photos says, “1182-1183 was rebuilt from an I&C (Indianapolis & Cincinnati Traction Co.) car in 1929 and scrapped in 1952.” The car is shown at the North Side station in Milwaukee, signed for the Port Washington interurban line. 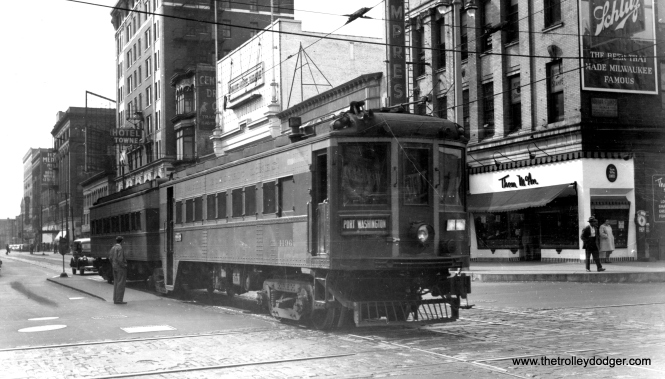 Don’s Rail Photos says, “1196-1197 was built at Cold Spring in 1929. The second car was equipped with small dining facilities but it was shortly rebuilt with a baggage compartment at the rear end. It was stored at West Allis Station after a few years. In 1942 it was rebuilt with all coach and scrapped in 1952.” This car is shown in downtown Milwaukee, signed for the Port Washington interurban line. 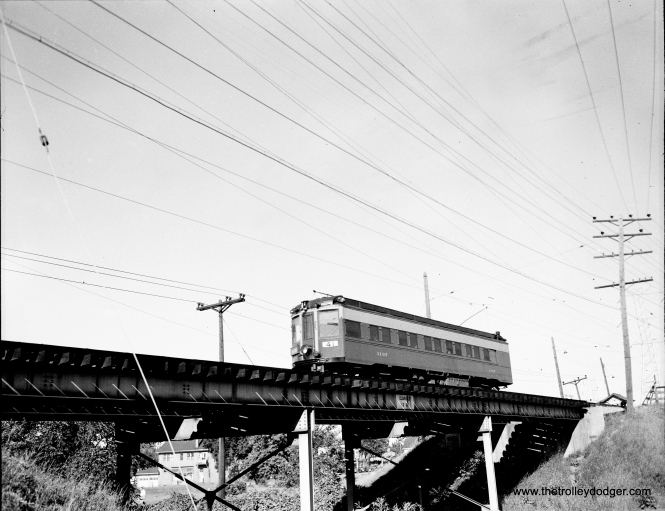 Speedrail car 66, shown here on the Waukesha loop, was a Cincinnati “curved-side” car. It had formerly been used by both Lehigh Valley Transit and the Dayton and Troy. This car, after having been refurbished for Speedrail, was only in service for a short period of time before the line quit in 1951.

The tragic result of a head-on collision between two Speedrail cars on a blind curve on September 2, 1950. Heavyweight cars 1192-1193, at left, ran into lightweight articulated cars 39-40. Ten people were killed and dozens were injured.

Here is a video about the Speedrail wreck: 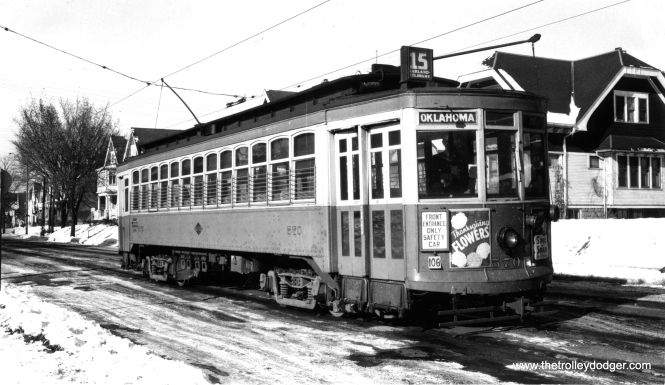 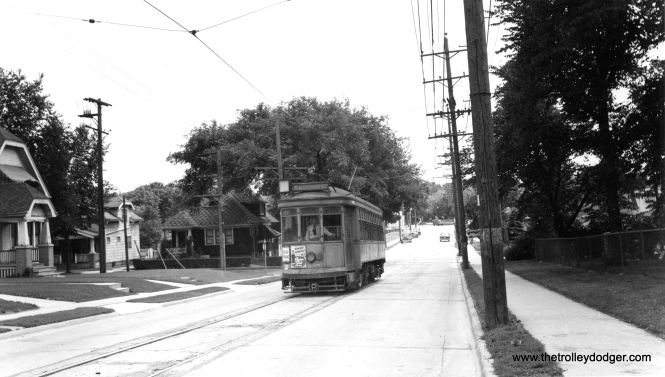 The caption to this photo reads, “City car – Milwaukee. Last 2-man car pulling into station on last run in West Allis.” Charles Kronenwetter adds, “Car 638 appears to be coming Northbound on 84th St approaching the National Ave intersection.” Don’s Rail Photos: “638 was built at Cold Springs in 1913. It was reconditioned as a two man car in 1928.”

Don’s Rail Photos says, “589 was built by St Louis Car Co in 1911. It was rebuilt in 1927.” This car is shown at the end of one of the Milwaukee city streetcar lines in West Allis. Charles Kronoenwetter says, “589 is coming off the short section of private right-of-way which ran between Mitchell St. and Becher St. onto Becher St.”

Railroad Record Club LP #35 features Hi-fi audio recordings of Milwaukee streetcars in the 1950s. We have digitized this and many other recordings, which you can find in our Online Store.

This is our 78th post, and we are gradually creating a body of work and an online resource for the benefit of all railfans, everywhere.

9 thoughts on “Traction in Milwaukee”