On the subject of the The Guy Wicksall Traction Collection*, I am, as you said (you were referring to me?), looking forward to seeing the Gladstone Branch material on it.

NJ Transit’s Gladstone operation is about as close as I ever got to riding and photographing a true Interurban Railroad. I think it was very close, with it’s DC electric MUs and wooden catenary poles. It sure had the “feel” of an interurban, at least it did to me. I attached two photos to illustrate my point. One of my “railfan regrets” is never getting over to SEPTA’s Norristown line and riding and photographing the Bullet cars. I always meant to, but somehow it never happened. Another regret is that when I made a railfan trip to Chicago back in 1982 I did not ride the CSS&SB’s old MUs. I did however, photograph ONE train of them, I attached the photos as well.

Looking at this CSS&SB photo gave me an idea for the Trolley Dodger. Perhaps you could ask people to send in a few of their traction photographs to use in a “Readers Photos” section. These photos would not necessarily pertain to the subject of the post, just a little gallery of unrelated traction photos. It might come in handy if you need to fill out a Trolley Dodger post that’s a little short. It’s just an idea.

Thanks! I will run your pictures. Once people see how it’s done, they will probably be inspired to send others of their own. And yes, I was referring to you.

Does the Gladstone branch retain any of that interurban character today? Interesting that it was so interurban-ish, yet was probably never classified as one. Unfortunately, I never got to ride it before the old cars were replaced.

I’d say the Gladstone Branch does retain it’s Interurban look, too a lesser degree. It’s still a single track main line with many passing sidings where, during rush hours, a lot of meets are done. The headways are still rather short between trains and the Gladstone end of the line has not changed all that much. It is an affluent area and land owners like their large estates and are not so willing to sell out for strip malls and housing developments.

What mostly made me think of Interurban trains on this line were the original Lackawanna RR DC electric MU cars, With their replacement, a good deal of that “charm” disappeared (daily commuters on those cars would most likely disagree). The wooden catenary poles have also been recently replaced with metal ones.

I’ve attached a recent photo of a NJT train of ARROW MUs departing the Far Hills station to show you how it looks now, still somewhat Interurban if you ask me. The photo was taken in December of 2014.

I forgot to attach a photo of the Lackawanna MUs in traction orange. This scene, too me, has a very strong interurban flavor. It was taken in the last weeks of DC electric service and the lead MU looks a little rough around the edges, but I really like the shot. It was taken at Pond Hill Road near Millington NJ on August 23, 1984.

Hoboken sure don’t look like this any more! The Ex-DL&W MUs are gone, the cranes along the long slip are gone, and the World Trade Center Towers are gone. This Kodachrome slide was taken on a gloomy day in March of 1980, just outside of the MU shed.

A nice broadside view of an afternoon rush hour Gladstone Branch train of NJ Transit (Ex-DL&W) DC electric MUs. The train is approaching the station stop at Far Hills, NJ on June 2, 1983. The Interurban RR look of this operation must not have been lost on someone in NJ Transit’s employ. When these cars needed repainting they were not given another coat of olive green paint- NJT painted them in a nice bright paint job of traction orange!

PS- I may be able to shed a little light on the mystery of the Lehigh Valley RR Baldwin switcher under catenary on the DVD.

Mr. Wicksall says in the narration that the scene may have been filmed on the North East Corridor in New Jersey. I think that is correct. It may have very likely been shot between Edison, NJ (at the time it may still have been called Stelton) and Metuchen. In this area was a former military base called Camp Kilmer. It was served by three railroads, the Pennsylvania (off the mainline), Lehigh Valley (off the Perth Amboy Branch), & Reading (off the Port Reading Branch). By the 1960s’ when that film was shot the base was closed and the land was being sold off for business redevelopment. Before this happened some of the base trackage was removed and that may have caused one railroad to use the tracks of another while serving the various industries on the former base property. I know the relationship among the competing RRs was not always friendly there. The Penn Central & Reading ended up in court fighting over who had the right to switch a chemical factory located on the Kilmer land.

Anyway, that is, in my humble opinion, the most likely reason for the LV train having been seen on PC electric trackage.

The only other place I know of that LV trains were regularly seen under PRR catenary was at “NK” tower in Newark, NJ where the “Hunter” connecting track linked the PRR NEC to the LV mainline. This was primarily a track used in the days of LV passenger service (which ended in 1961). Here LV diesels or steam was changed for PRR GG-1s (and reverse) for the trip into or out of Pennsylvania Station, New York. I believe a small amount of freight was interchanged here but the film footage on the DVD does not appear to have been shot here.

Thanks! I will forward this to Guy.

Hi Dave! Help! Need your help again. I don’t know what we have here. Overall view shows “Cobbs Gap” as it was called years ago. Present day PA Rt 435 runs below the cliffs, known as Greenville Cliffs years ago, in the background. The second photo is a cropped enlargement of the same. The car has the Erie logo, and the number 200. Thanks in advance.

Hopefully some of our readers can shed some light on this mystery photo, thanks.

Andre Kristopans recently sent us several scans, including a CTA schedule summary for Westchester trains, fare changes over the years, and CRT schedules as of the CTA takeover. Note Sunday only North-South. Other routes ran 24 hours terminal to terminal on Sunday.

A few items of interest:

Thanks. So, in 1952 if you transferred from CMC to CTA, you had to pay a nickel?

Yes indeed! Additional amount was, as far as I can tell, paid to the receiving agency, in this case the CTA bus driver. But you can tell that towards the end, passengers were probably not too happy with this, because until 10/1/47 the extra fare was the other way! 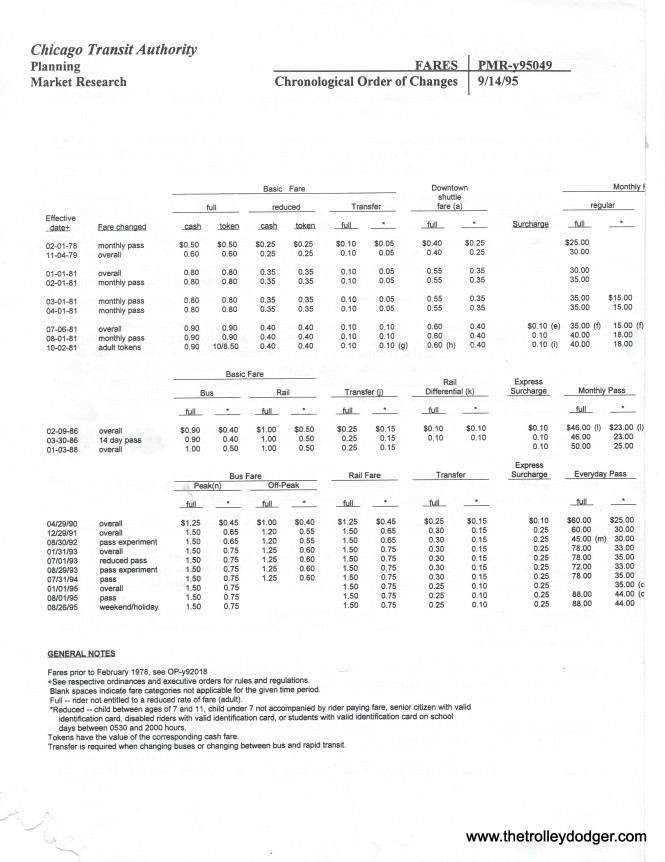 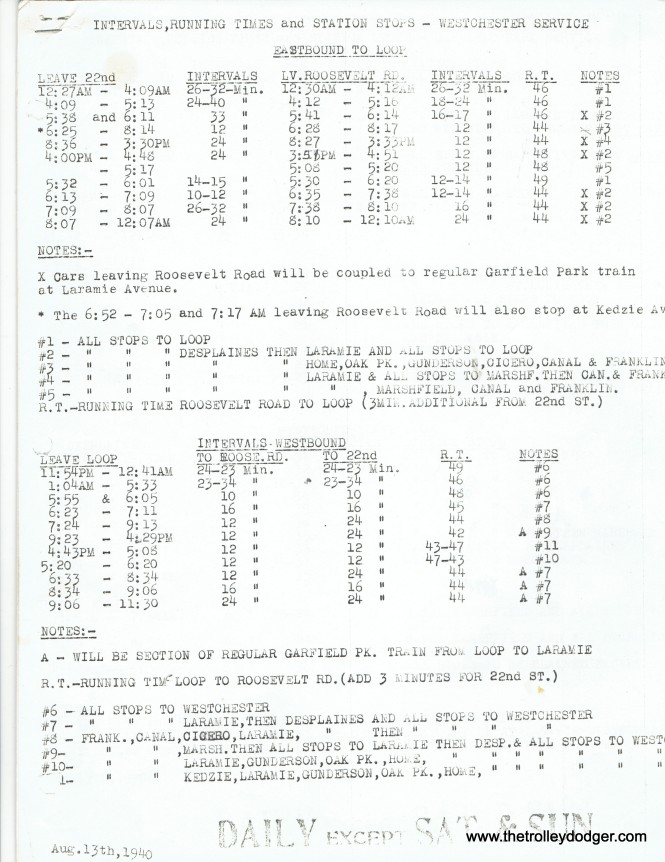 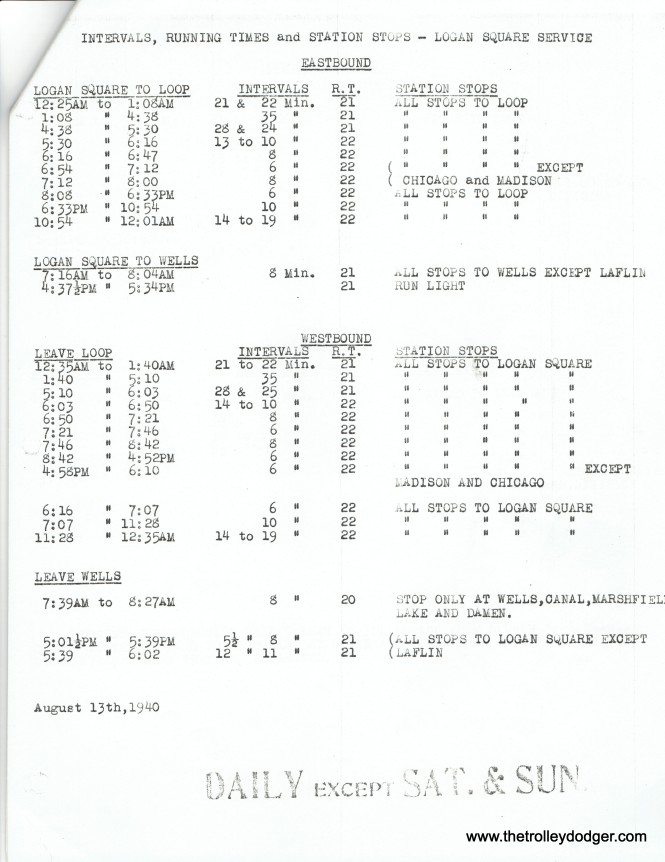 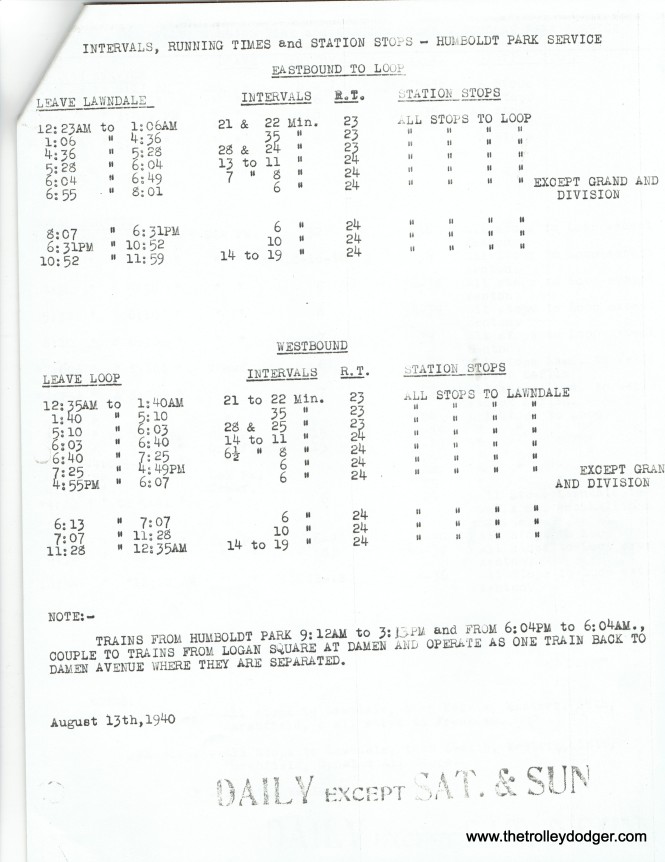 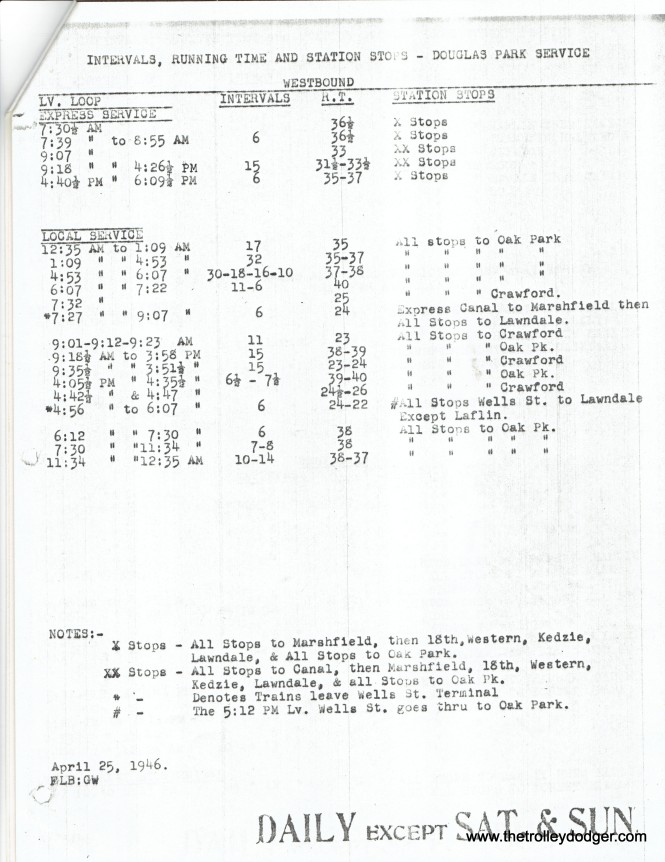 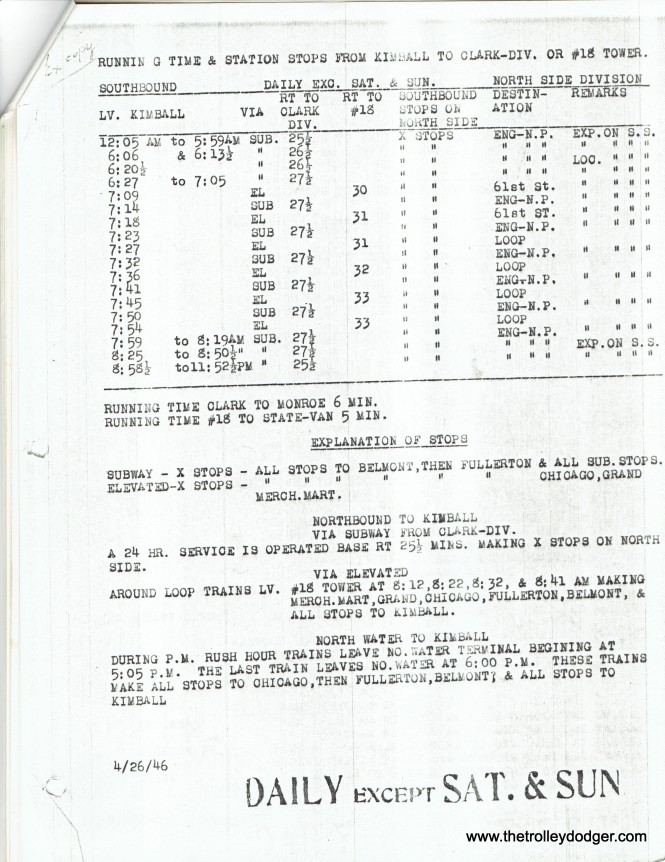 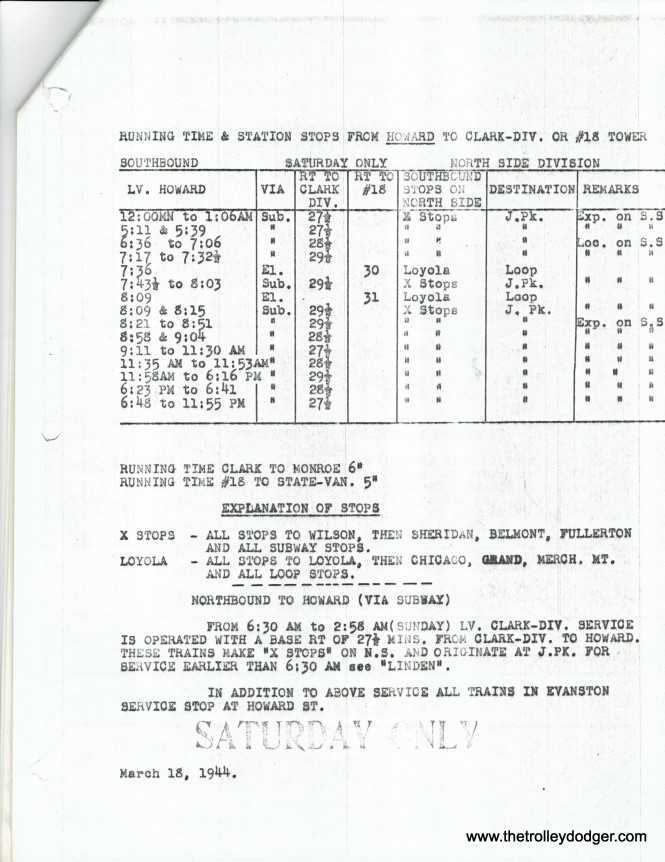 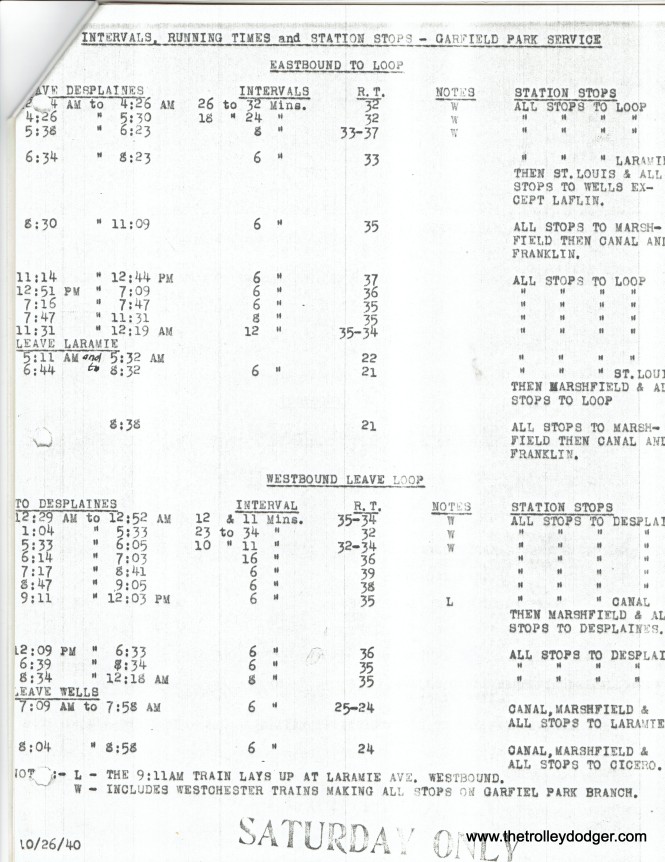 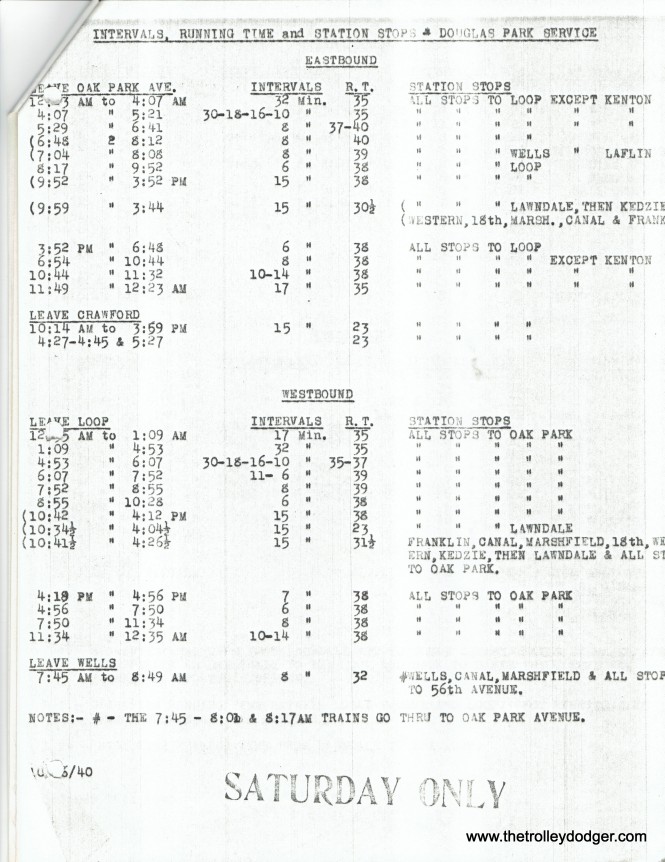 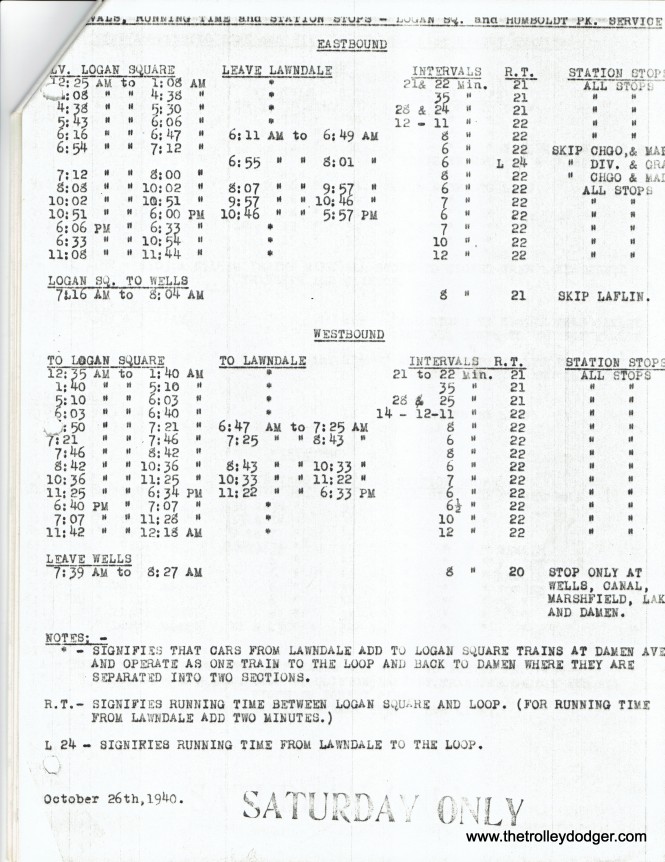 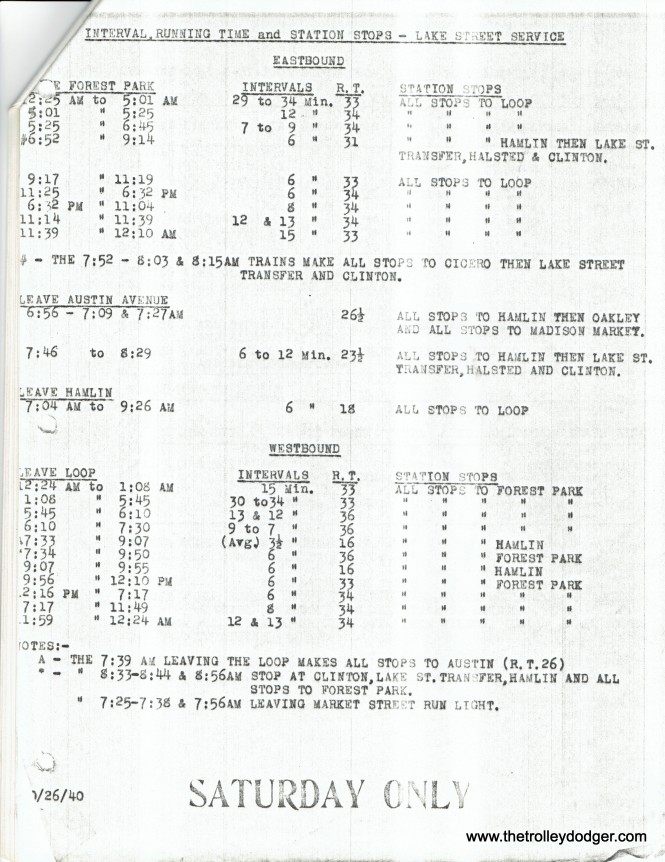 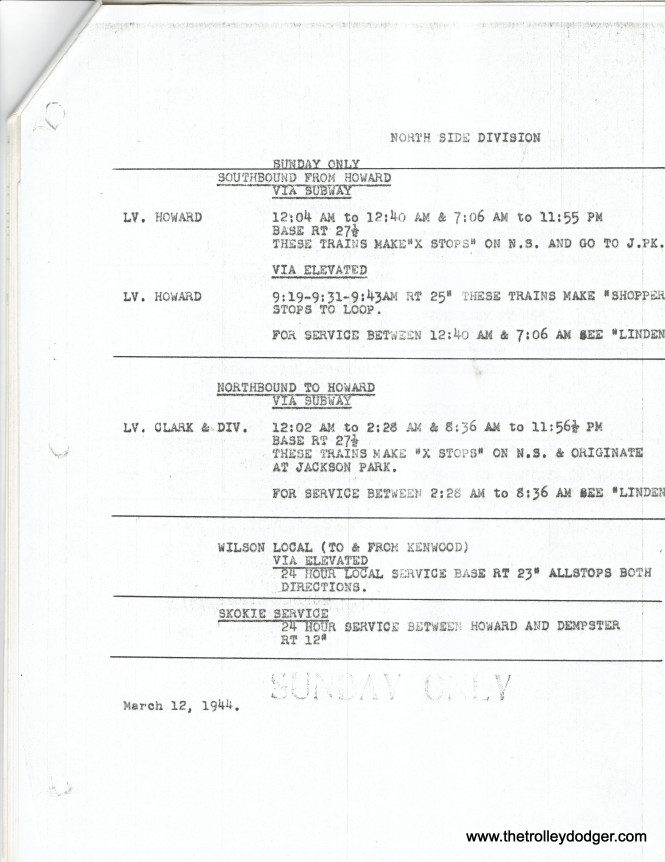 Keep those cards and letters coming in, folks. You can always drop us a line at:

Our latest release, by special arrangement with Guy Wicksall, features video transfers of rare, high quality 16mm color films of electric railroads taken across the country between 1963 and 1975. These are much better quality than the more typical 8mm films railfans used back then. If you like classic railfan videos, you are sure to enjoy this collection, which features narration by the photographer. Mr. Wicksall receives a royalty on each disc sold.

This is our 164th post, and we are gradually creating a body of work and an online resource for the benefit of all railfans, everywhere. To date, we have received over 213,000 page views, for which we are very grateful.

You can help us continue our original transit research by checking out the fine products in our Online Store. You can make a contribution there as well.