In this Chicago Surface Lines brochure, visitors were encouraged to see Chicago by streetcar, trolley bus, and, apparently, Zeppelin.

Chicago’s second World’s Fair took place in 1933 and 1934, and celebrated “A Century of Progress” since the city’s founding. Coming, as it did, in the depths of the Great Depression, this was a bold (and successful) venture, under the able leadership of Lenox Lohr (1891-1968). Chicago’s fair made a profit, while the later 1939-40 New York World’s Fair lost money.

Getting the 48,469,227 fair visitors back and forth to the lakefront site was a tremendous undertaking, and the Chicago Surface Lines played an important role. The fair opened on May 27, 1933, and it quickly became apparent that transportation needed improvement.

Two streetcar line extensions, among the last ones in Chicago, were hurriedly undertaken. The Roosevelt Road extension was the more elaborate of the two, since there were more obstacles in its path, namely the Illinois Central train station and tracks. The IC tracks were below grade, since they were built at the original ground level Downtown, which was raised several feet after the 1871 Chicago Fire.*

Chicago’s new Mayor Edward Joseph Kelly (1876-1950) took the controls of the first streetcar over the viaduct on August 1st, and posed for a good many press photos along the way. The two line extensions, from Roosevelt and Cermak, were retained for about 20 years, and continued to serve the Field Museum, Shedd Aquarium, Adler Planetarium, and Soldier Field. They both had turnaround loops, to permit the use of single-ended as well as double-ended cars.

CSL had two modern experimental streetcars built, and used them to shuttle visitors to and from the fair. Of the two, at least part of car 4001 has survived to this day, while 7001 was perhaps more influential on the eventual design of the highly successful PCC cars, starting in 1936. The general configuration of this single-ended car, and its door arrangement, were followed on Chicago’s 683 PCCs.

Today, we present a Chicago Surface Lines brochure touting their service to the World’s Fair and all parts of Chicago. Along with this, we have some additional photos showing the Roosevelt Road extension. You can find some additional pictures of this operation in later days in one of our earlier posts. There is also a photo showing car 7001 on State Street in 1934, in World’s Fair service.

After the CTA converted the Roosevelt Road streetcar line to bus, the extension to the “Museum Loop” operated as a shuttle between August 12, 1951 to April 12, 1953, when it was abandoned, and eventually demolished. There’s a picture of the route 12A shuttle operation on the CERA Members Blog, here. (The same blog also shows the last known picture of car 7001, shortly before it was scrapped in 1959.)

PCCs occasionally did run to the Museum Loop during special events, for example, on April 26, 1951, when General Douglas MacArthur (1880-1964) made a personal appearance after his dismissal by President Harry S Truman. You can read more about that historic event here.

Northerly Island, the site of A Century of Progress, was built on landfill. After the fair, it was used as Meigs Field, an airport for small planes, from 1948 to 2003.

Now that planning is underway for the Lucas Museum of Narrative Art to be built in the “Museum Campus” area, various ideas have been floated for improving transit in this area. These proposals include a streetcar line.

So, when it comes to Chicago’s lakefront, what goes around may yet come around- especially if it’s a streetcar.

*This is approximately correct.  It would be difficult to determine what “ground” level truly was when the City was first settled, since Chicago was built on a swamp.  Ground level was raised 10 feet downtown in the 1860s to permit the easy installation of a sewer system, and there have been numerous additions via landfill, especially east of Michigan Avenue, which was originally the shoreline. You would apparently have to go as far south as Jackson Park before the Lake Michigan shoreline is in its pre-development location.

It’s worth mentioning that when New York put on their World’s Fair in 1939-40, they built a rapid transit extension of the IND subway system to reach the south end of the site. This operation was called the World’s Fair Railroad, and required payment of a second 5-cent fare. This branch line was constructed at a cost of $1.2m.

This extension ran partly through Jamaica yard, and went 8,400 feet beyond it, for a total length of just under two miles.

The privately owned BMT and IRT subway/elevated systems shared service on what is now the 7 line, and fairgoers could get there via the Willets Point station, which now serves Citi Field, home of the New York Mets. The regular fare was charged, and these trains reached the north end of the site.

The Long Island Rail Road opened a station along their line adjacent to Willets Point, which remains in use today.

After the fair closed, the World’s Fair Railroad spur was dismantled and removed, the only such IND service to suffer this fate. During the course of the fair, New York City took over operation of both the IRT and BMT, unifying the three subway operations under municipal ownership.

No rapid transit extensions were provided for the 1964-65 World’s Fair, which took place on the same location. However, there was a monorail for moving people around within the fair site itself.

A CSL map showing how the Roosevelt Road and Cermak Road streetcar lines were extended to new loops serving A Century of Progress. 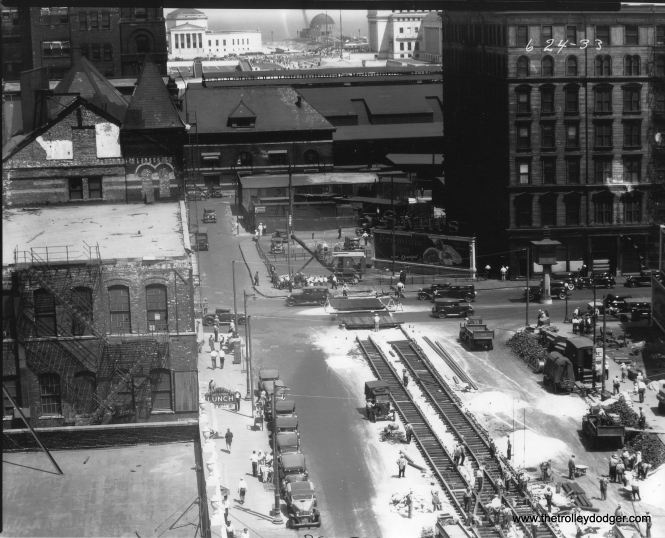 The Roosevelt Road extension to the World’s Fair site is under construction in this June 24, 1933 view. The Illinois Central station lies between here and what we now call the “Museum Campus.”

It’s August 1, 1933. The World’s Fair extension along Roosevelt Road is now completed, and Mayor Edward Kelly (posing for pictures) is at the controls of the first service car. Kelly had succeeded Anton Cermak as mayor earlier that year after the latter was assassinated in Miami. 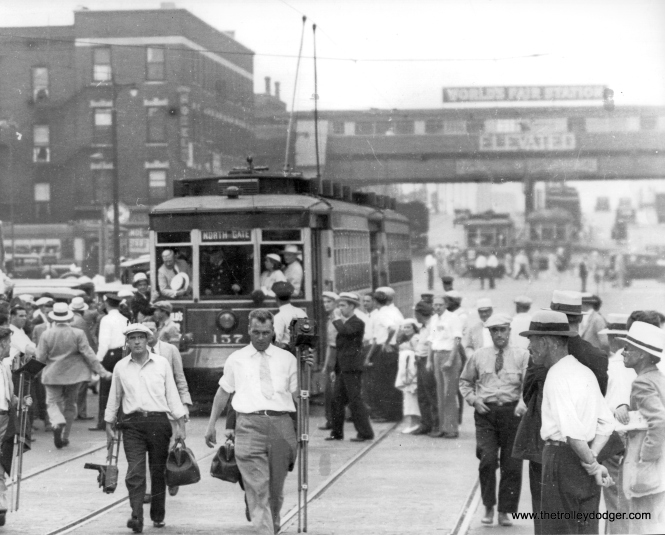 A close-up of the previous scene. 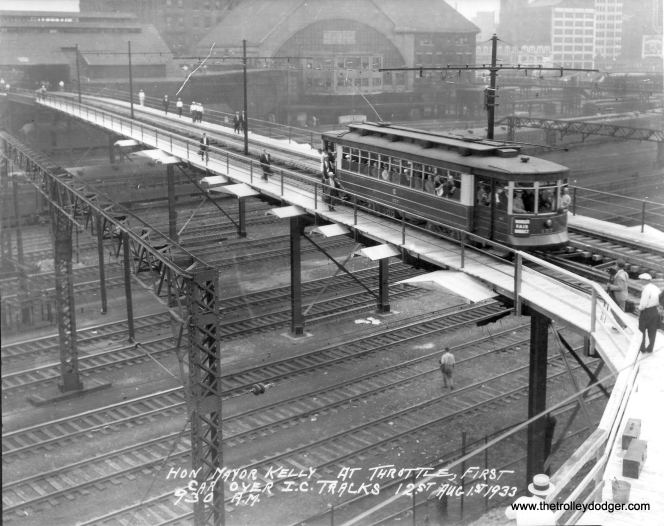 The first service car over the Illinois Central viaduct, with Mayor Kelly at the throttle, in a picture taken at 9:30 am on August 1, 1933.

An artist’s rendering of CSL experimental pre-PCC streetcar 4001, built by Pullman. It entered service in 1934 and was retired in 1944. Its body shell is preserved at the Illinois Railway Museum.

An artist’s rendering of CSL experimental pre-PCC streetcar 7001, built by Brill. It entered service in 1934 and was retired in 1944. It was scrapped in 1959.
Note that the car is signed for Clark-Wentworth, the busiest line on the Chicago system.
Ironically, while this design resembles the PCC car of 1936, Brill refused to license the patented PCC technology, and as a result, was driven out of the streetcar market within a five years, after building but a few dozen “Brilliners.”

A side view of pre-PCC car 7001, showing how the general arrangement of doors was quite similar to that used on the later Chicago PCCs. (CSL Photo) 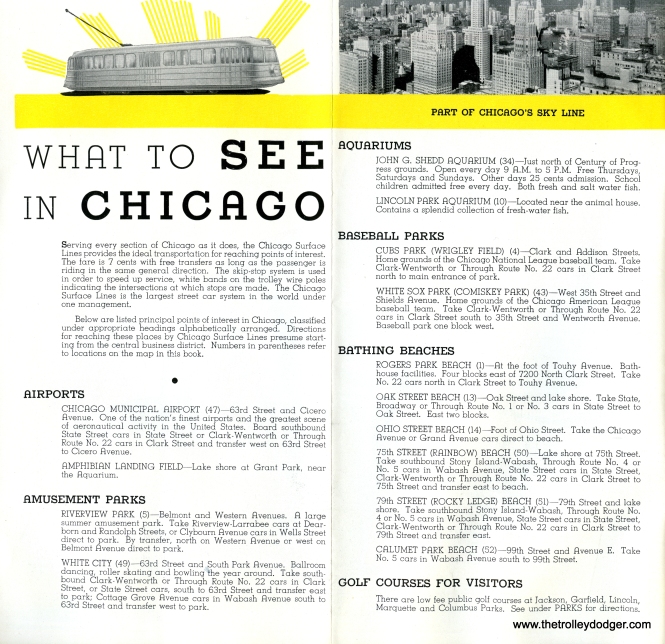 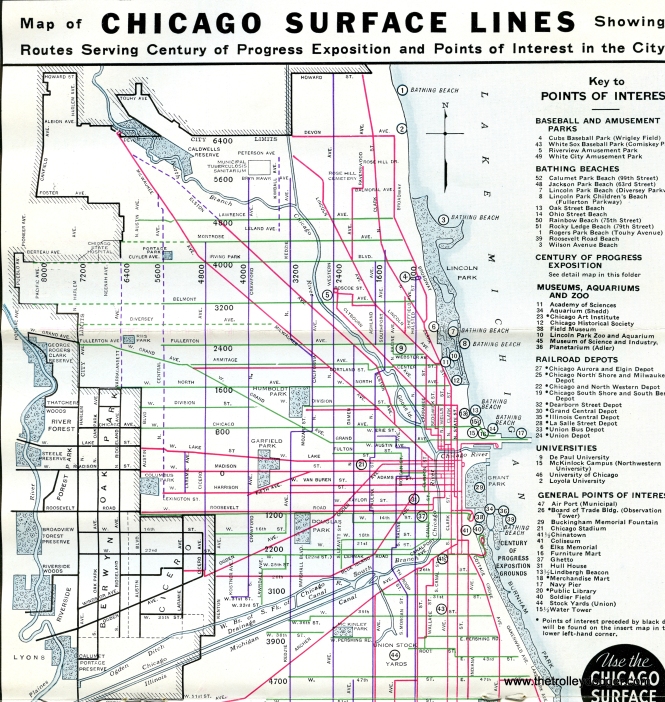 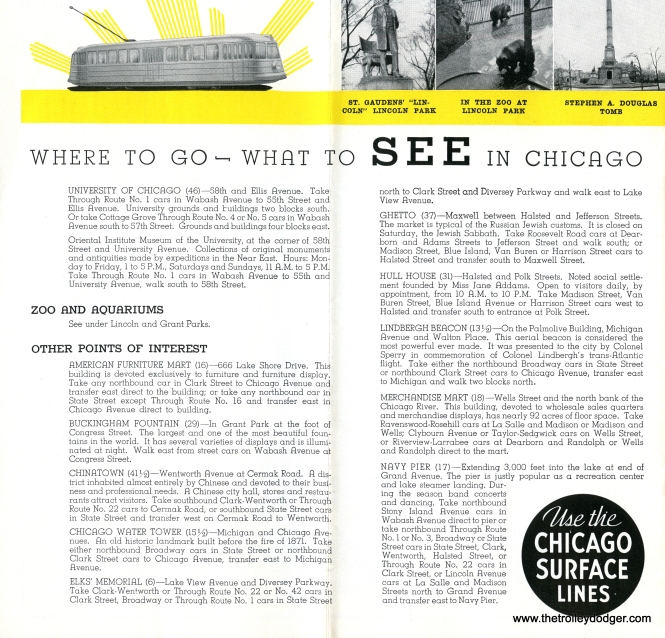 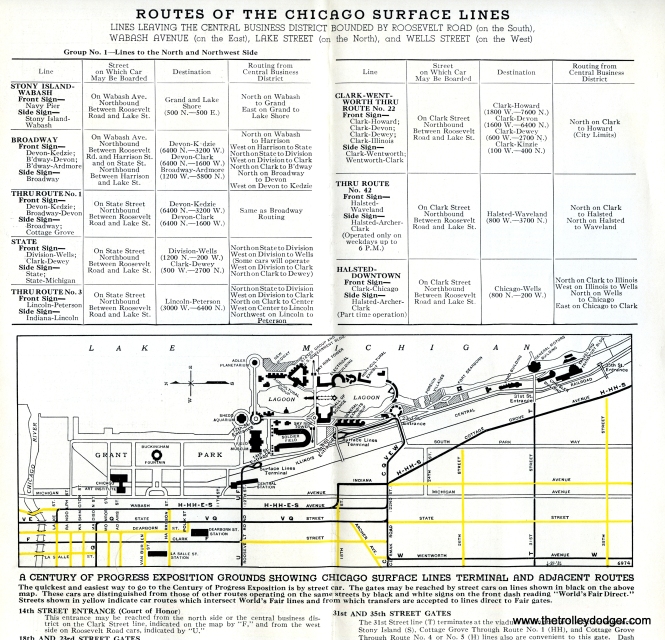 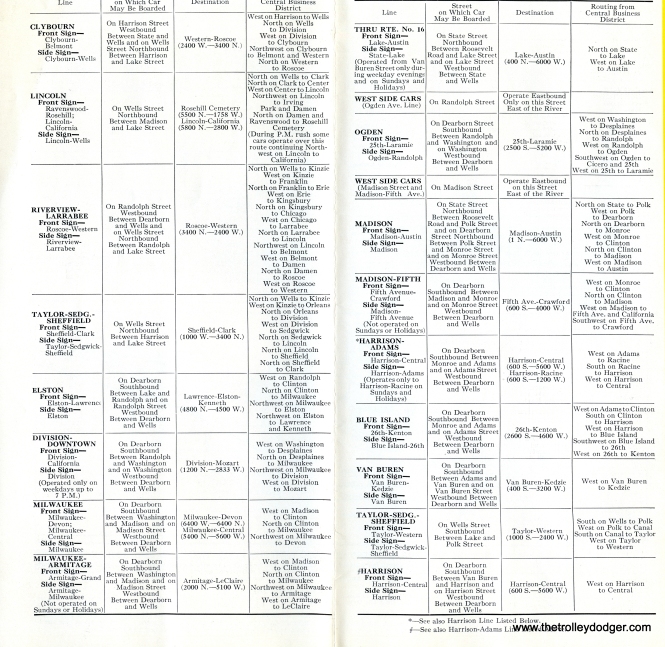 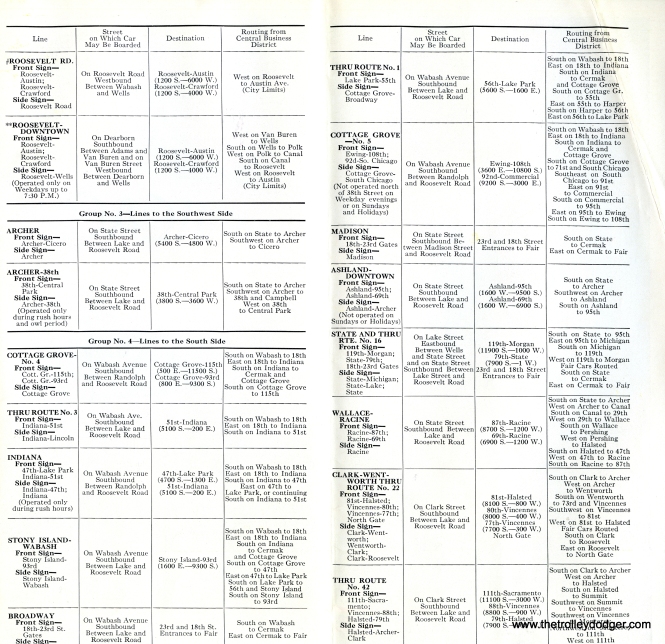 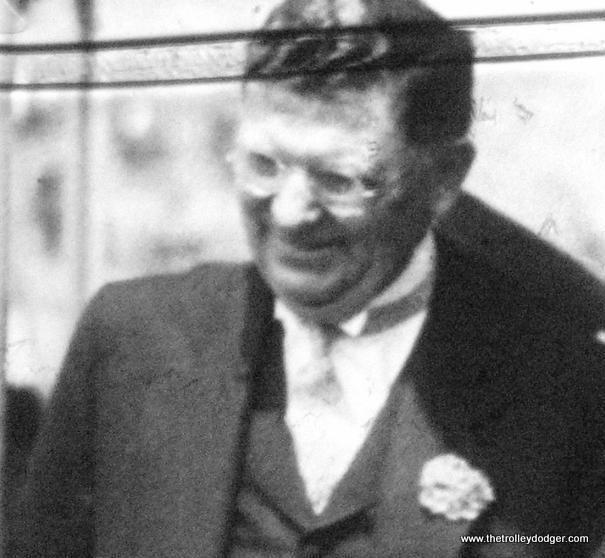 Chicago Mayor Edward Kelly presides over the opening ceremonies for A Century of Progress at Soldier Field, May 27, 1933. 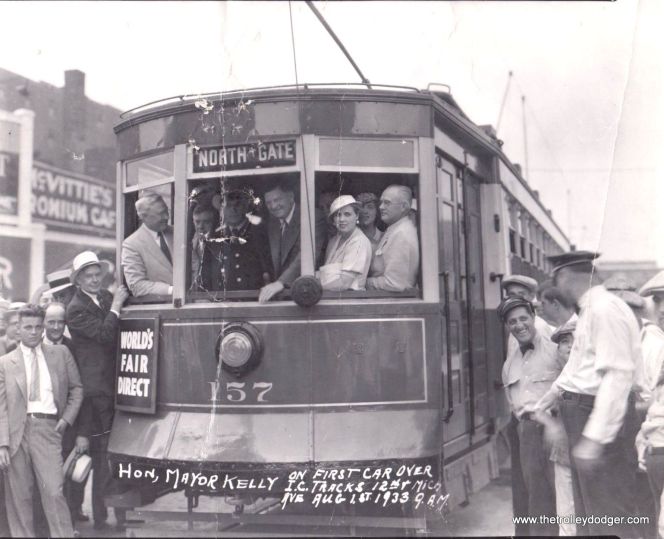