The Chicago Transit Authority’s 2400-series cars first entered service in 1976, shortly before the first Mayor Daley died. For many years, they were workhorses of the fleet, but have experienced a kind of “long goodbye,” to paraphrase the title of a book by Raymond Chandler.

They seemingly had all disappeared from service last summer after a daring robbery, which may have taken advantage of the fact that these were the only remaining “L” cars without security cameras installed. They soon returned for a while, before the CTA announced that their last regular service runs had taken place on October 31, 2014. (Cars 2401-2424 have been retained for work service, as they have been used for perhaps the last 20 years.)

Still, the idea of a final “farewell trip” like the one for the 2200s retirement had a lot of appeal, and it is much to CTA’s credit that they did things up right. The cars that were in the best shape were chosen for a ceremonial last trip in regular service, which took place on January 21, 2015.

You can read the service bulletin for the trip here, and also a CTA handout from the trip, giving the history of the 2400s.

The basic schedule was as follows:

We’ll operate a ceremonial late-morning trip on the Loop for those who wish to take part in the celebration.

No intermediate stops are scheduled for this ceremonial trip.

The train will make one round trip on the Brown Line between Kimball and the Loop, making all stops.

The train will make all stops along the Red Line thru Fullerton, the Brown Line thru Merchandise Mart, and then the Green Line from Clark/Lake thru Ashland/63rd.

The train will then make one trip from Ashland/63rd to Howard via the State Street Subway—just like the old Englewood-Howard trains used to!

The route will take the train on the Green Line from Ashland/63rd thru 35th-Bronzeville-IIT, then onto the Red Line from Roosevelt thru Howard, making all stops along the way.

I decided to ride the Ravenswood portion of the journey.  I met the train Downtown and caught up to it on the second of its two trips around the Loop.  However, this was at Adams and Wabash, where the train did not stop.

So, I figured I could potentially get ahead of it by riding the Red Line subway to Belmont and wait fir its arrival.  I boarded the train there, and rode to the Brown Line terminal at Kimball and Lawrence.  By this time, the train was running about 10-15 minutes behind schedule.  (This was not a problem, since the train was making all stops by this time, and could simply function as another regular service train for whoever wanted to ride it.)

We were poised for a quick turnaround at Kimball when unfortunately one car got “tagged” with spray paint and was quickly removed from service.  Two cars were cut out and put in the yard for cleaning, leaving an 6-car train for the trip to the Loop and back.

I rode the train Downtown and got off at Adams and Wabash.  So, while I did not ride on the remainder of the trip, which was to feature the “old” Howard-Englewood routing among other things, I did ride part of the day’s trip.  A fine time was had by everyone on board, and it was great to see so many familiar faces, all paying tribute to railcars that served faithfully and well for so many years, in contrast to others of similar vintage in other cities that did not.

At least in this regard, we got some things right in the 1970s.  The 2400s set the standard for all the CTA railcars that have followed since.  If they are not going to be missed as much as the 2200s, that is probably because even after all these years, they still blended in quite well with today’s equipment.

But, when it comes to transit equipment, that’s what you want- evolution, not revolution.

The “long goodbye” for these cars may not even be over yet, since the CTA may very well keep some of the 2400s for use in charter service, as part of their historical fleet.

Meanwhile, I hope you will enjoy the photos and videos I took that day.

The CTA crew did a fantastic job preparing the 2400-series cars for this trip.

Authentic 1976-style system maps were recreated for this special trip.

The Ravenswood (today’s Brown Line) map as it looked circa 1976.

Thanks for the memories. 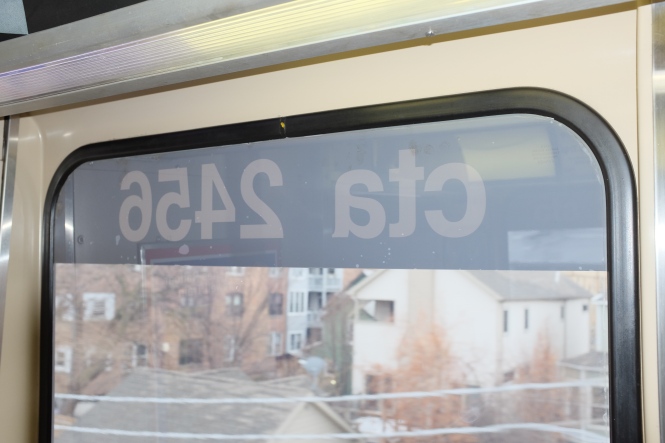 The cars were spotlessly clean. 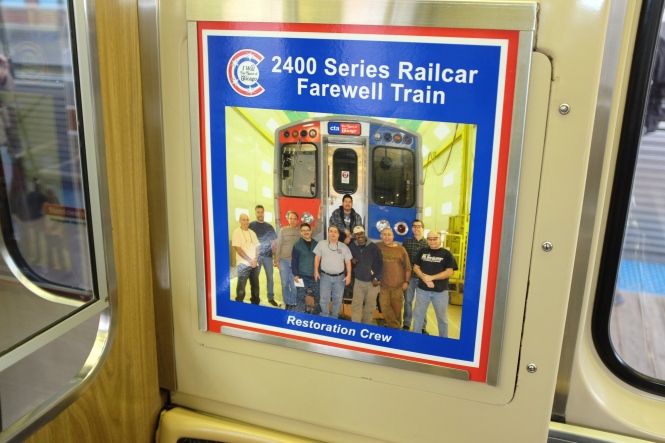 Fans mill about at the Brown Line terminal at Kimball and Lawrence.

At Kimball and Lawrence.

Just prior to one car getting “tagged” with spray paint. 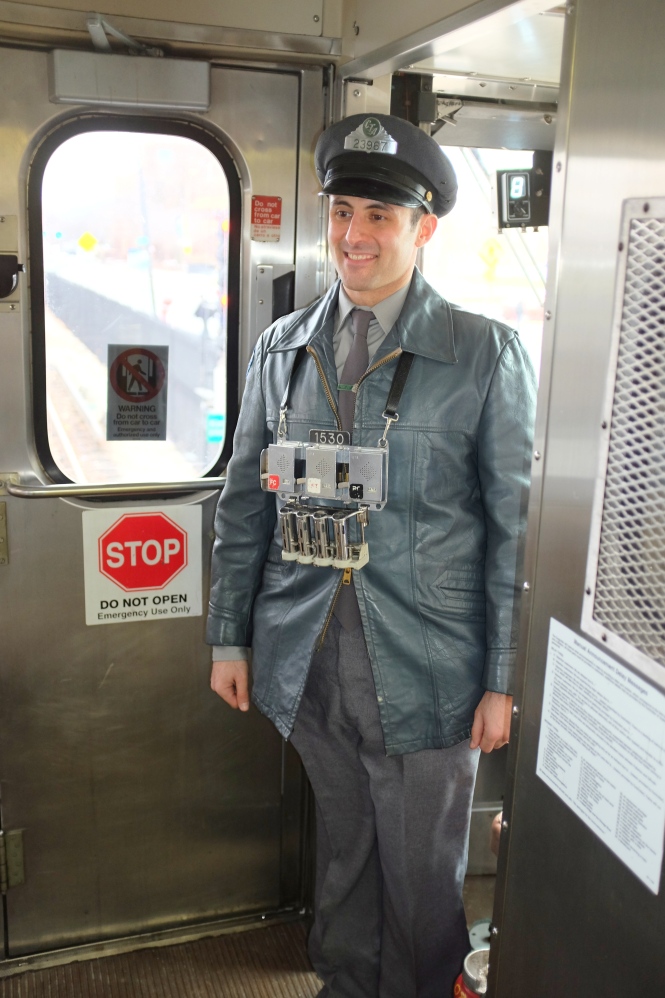 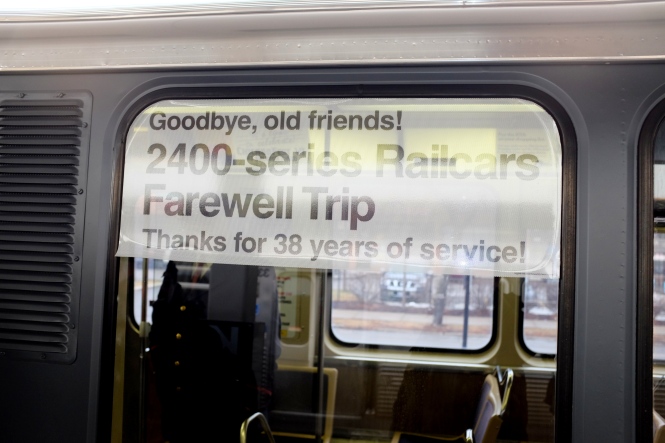 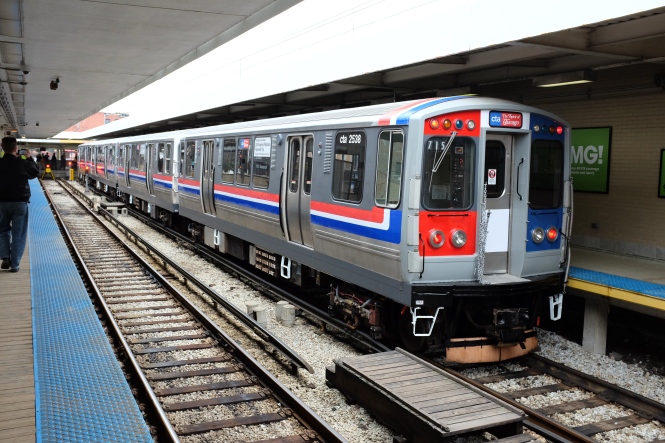 Here, half of the 8-car train has been cut out in the yard, to remove the middle two cars (one of which had just been “tagged” with spray paint). Later, two czars were coupled back on to form a 6-car consist while the other two cars were to be cleaned in the yard.

Waiting for two cars to be recoupled. 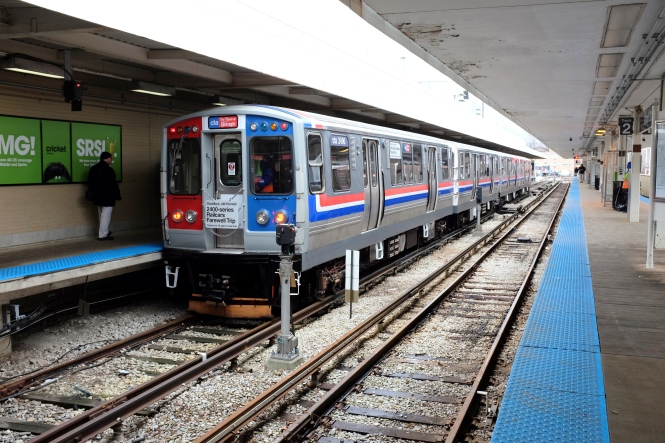 Fans board the train for its return trip south on the Brown Line.