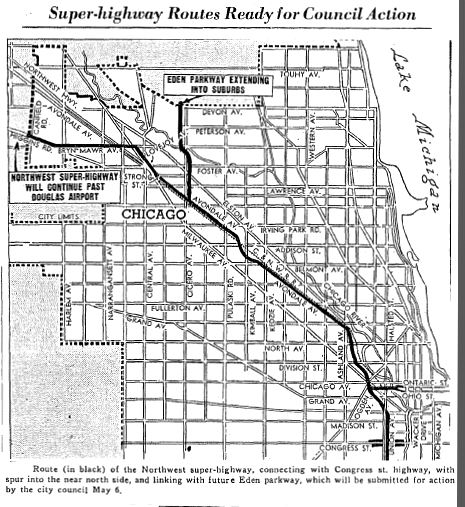 I ran across an interesting article detailing the plans for building what we know today as the Kennedy and Dan Ryan expressways as they stood in 1946.  Construction of the Northwest expressway did not begin until the late 1950s, and the highway opened in 1960.  The Dan Ryan followed and opened in 1961-62.

The Tribune article from April 18, 1946 shows that the routes for both expressways were already pretty much determined, with a few exceptions.

The South (Dan Ryan) expressway is shown as being on the east side of the Rock Island railroad tracks until 39th street, and then continues south between Lafayette and State streets to approximately 99th, where it would connect with the Calumet expressway and the “Chicago-Detroit Super-highway.”

As built, the Ryan stays west of the Rock Island and does not run between Lafayette and State until it reaches Marquette (67th) heading south.  The article says there will not be an interchange at 63rd because the road would be elevated at that point (it is not).  The Chicago Skyway is not mentioned in the article, since it likely was planned later (it opened in 1958).

Virgil Gunlock, as head of the Chicago Department of Subways and Superhighways, had a lot to do with the expressway planning.  He later became Chairman of the Chicago Transit Board, which runs the CTA.  He died in 1963 at age 57.

The two rapid transit lines that were eventually built in the Dan Ryan and Kennedy expressways (opened in 1969 and 1970) were not part of these plans until about 1955.  By that time, construction of the Congress (later Eisenhower) expressway was already well underway, with a rapid transit line in the median.

The Congress expressway is not mentioned in the article since planning for that had pretty much been completed prior to WWII.

Some portions of the expressways that the article says were to be built elevated were actually put into open cuts instead.  There is no mention of what we now call “Hubbard’s Cave” in the downtown area, but there is mention of a block-long tunnel between Ashland and Cortland.

The reversible lanes on the Kennedy were apparently something that did not enter into the design process until the 1950s.  I recall reading elsewhere that the reversibles ended up being shortened when the planners decided to add a rapid transit line to the highway.

Even in 1946, plans were for the highway to go past what we know today as O’Hare airport.  In the article, it is called Douglas Airport.  Prior to WWII, plans for the Northwest expressway stopped at the city limits.

Even before WWII, there were plans for a South expressway that would parallel the Rock Island railroad.  It was thought that this sort of alignment would reduce the number of side streets that would have to be truncated because of the expressway.  The planners did not want to adversely affect local traffic on side streets.

As you can see, these highway plans were already very far along 9 years before Richard J. Daley became mayor.  In fact, they even predate the two terms of his predecessor, Martin Kennelly.  At the time this article was written, Edward Kelly was still in office.