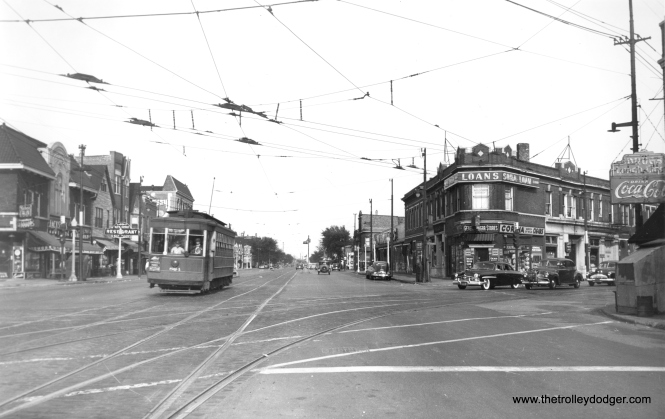 This is the fourth installment in our ongoing series Chicago Streetcars in Black-and-White.   You can find the other three installments (and the others we have done in color) by typing “Chicago streetcars” in the search window for this blog.

We offer you another generous selection of classic photos by some of the greatest railfan photographers of all time. As always, clicking on each picture will bring up a larger version in your browser.

If you have interesting information to share about these locales, we look forward to hearing from you. When referring to individual photos, please use either the car number or image number.

I am continually amazed at how expert our readers are at identifying mystery locations.

Irving Park Road and Elston as it appears today. 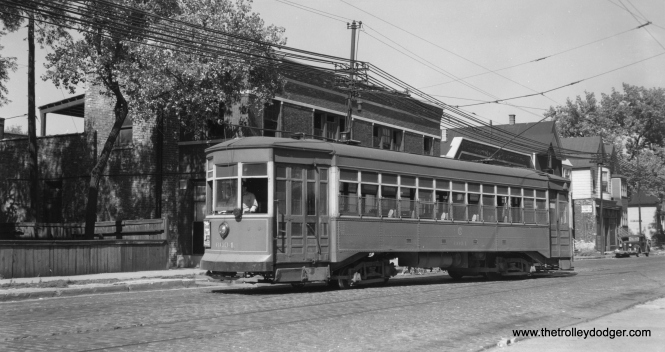 December 2, 1936 – “42 trolleys burn in $500,000 blaze. Forty two passenger and service trolley cars of the Chicago and West Towns Railway Company were destroyed when fire swept through the car barns in Oak Park, Ill., western suburb of Chicago. Busses will be used until the trolley cars can be replaced.”

The site of the former Chicago & West Towns streetcar barn as it looks today. A Dominick’s Finer Foods was built here in the 1980s, after Pace had purchased the West Towns and moved the bus garage elsewhere. Dominck’s closed in late 2013 and the building is being converted into a Pete’s Fresh Market. 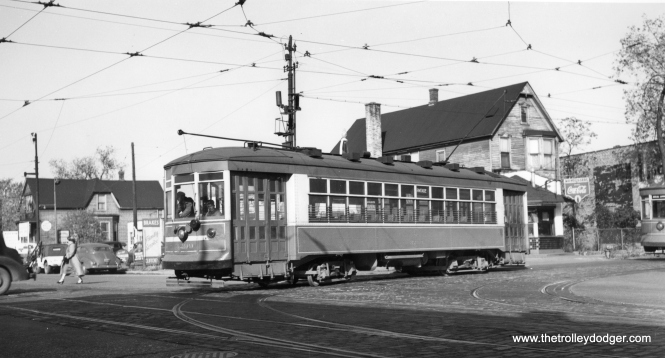 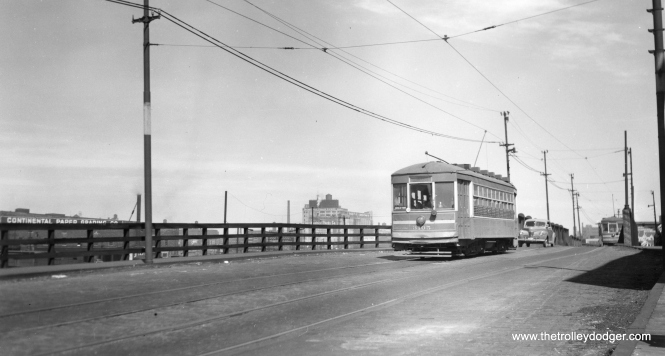 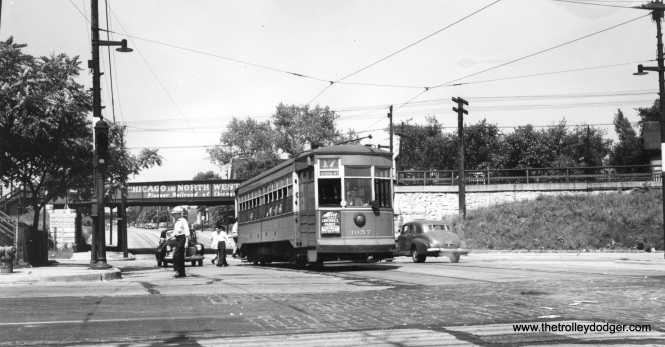 CSL 3057 on route 17, the Kedzie through route, at Belmont. The Kennedy Expressway now runs past this spot on elevation. The through route was replaced by buses on December 4, 1949. 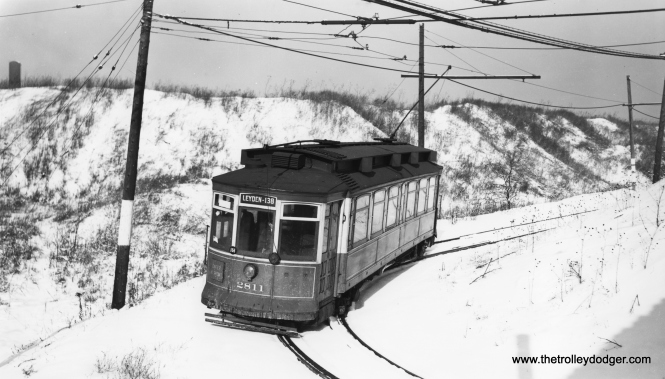 George Foelschow writes, CSL 2811 “is on page 29 of the Lind book, identified as 134th Street (where it ducks under the Illinois Central tracks).” (Joe L. Diaz Photo)

CSL 3298 on route 78 – Montrose, possibly during WWII. By this time, the western portion of the route was handled by trolley buses. Andre Kristopans adds that this “MIGHT be Montrose & Pulaski. Building on corner is heavily altered, but window arrangement does match.” Richard Poemape writes, ” the photo that you have for CSL 3298 on Route 78 – Montrose was taken at the intersection of Montrose and Clark. The building in the background is on the N/W corner.” 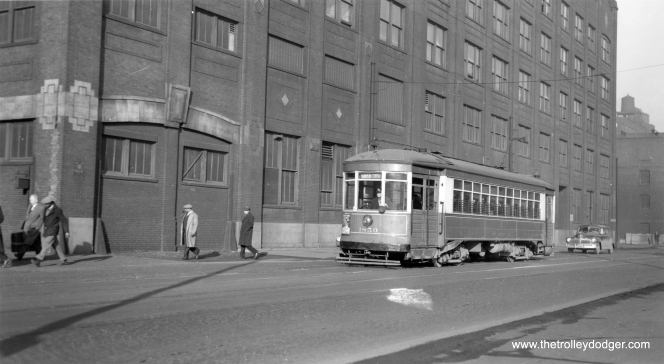 Andre Kristopans writes, “Car 1400 is on 21st/Fulton route, not Cermak. I would hazard a guess as to location being Monroe and Clinton, with car about to turn east to south.” (Joe L. Diaz Photo) 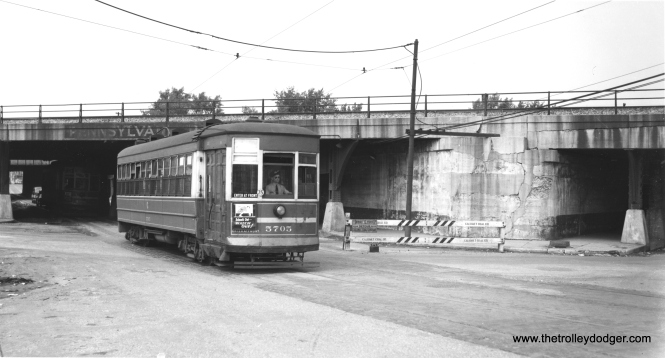 Bob Lalich writes, “CSL 5705 is southbound at 100th and Ewing, emerging from the PRR viaduct. The NYC and B&O viaducts can also be seen in the background.” (Joe L. Diaz Photo)

Bob Lalich says, “CTA “sedan” 3333 is turning west on 93rd St from Baltimore Ave. The IC South Chicago Branch can be seen in the background.”

CSL 745 at 4544 W. 26th, according to the address on the building at rear. (Robert W. Gibson Photo) Bill Shapotkin adds, “Yes, your location (a #60 — Blue Island car at the end-of-line at 26th St/Kenton Ave) is correct. Have not been there in a long time — but have heard that the building in background still stands (but would not bet the house on it without checking). Train at left is on the BRC.” 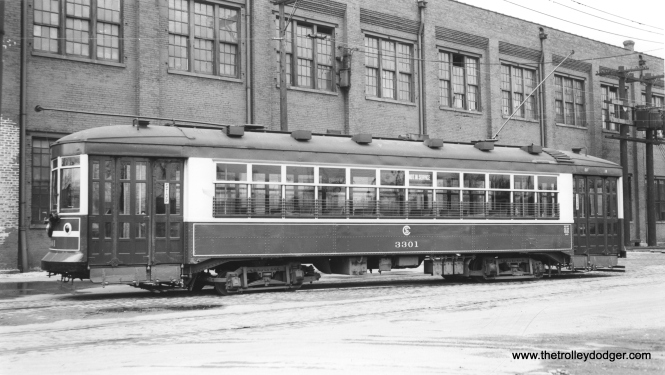 Bob Lalich writes that CSL 2619 is “northbound at the corner of 132nd and Brandon in Hegewisch. Photo is looking north.” (Joe L. Diaz Photo)

CSL 1836 is “eastbound on Harrison at Ogden,” according to Andre Kristopans. (Joe L. Diaz Photo) 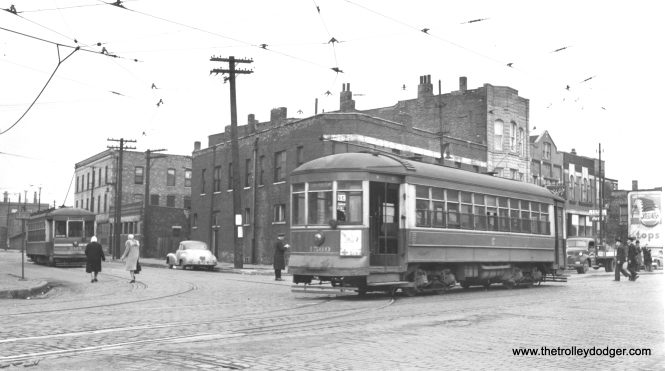 Andre Kristopans says,”1560 is a pull-in to Blue island car house going west on Blue island at Leavitt – car in background is at the south end of 18th St line on Leavitt at Blue Island.” 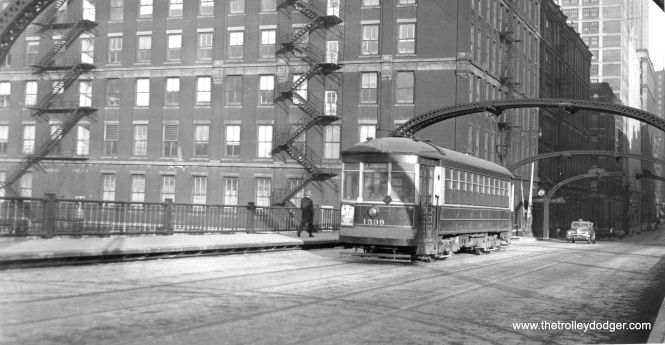 Bob Lalich writes, “CSL 1407 is WB on 87th St having just passed Holland Road. The railroad viaduct in the background carries the tracks of the BRC and the freight tracks of the C&WI. Joe Diaz was standing on the viaduct of the C&WI passenger tracks when he took the photo.” (Joe L. Diaz Photo)

CSL 2729 is “westbound on Pershing west of Cottage Grove. Car in background is a Pershing car at end of his route. Note Lincoln/Wrightwood sign – I would say this is a Lincoln/Indiana car pulling out via Pershing to Indiana to go north,” according to Andre Kristopans. The sign advertising Jay McShann at the Savoy helps date this picture to 1946. (Joe L. Diaz Photo)