CSL 6313 heads north past the Balaban & Katz Century Theater, located at 2828 N. Clark. The theater was later gutted and replaced by an indoor mall, but it has since been turned back into a movie theater. According to http://www.cinematreasures.org:
“The Century opened as the Diversey Theater in 1924 at the busy intersection of Clark and Diversey Streets in Lakeview, designed in Spanish Baroque style by architect Edward Eichenbaum of the firm of Levy & Klein, whose work also included the Granada in Rogers Park and the Marbro in Garfield Park. The theater was remodeled in the Art Deco style in the early 1930s, when it was renamed the Century, in honor of the Century of Progress World’s Fair that was held in Chicago during 1933 and 1934.
In 1973, the Century was closed, the interior was completely gutted, and the theater was rebuilt as the Century Shopping Centre, a multi-level shopping mall.
In 2000, the struggling mall gave its uppermost levels over, ironically, to a new seven-screen art house cinema, operated by the Landmark Theatres chain. The small auditoriums were decorated in a neo-Art Deco style, and the ornate Baroque terra-cotta facade was cleaned and restored and given new signage.” (Robert V. Mehlenbeck Photo, Joe L. Diaz Collection)

Thanks to the generosity of George Trapp, here is another generous helping of classic Chicago Surface Lines streetcar photos from his collection. (To see additional photos he has already shared with us, just type “George Trapp” into the search window at the top of this page. Several other posts should come up.)

The great majority of today’s pictures are from the far north side of Chicago. Clicking on each picture with your mouse should bring up a larger version in your browser for closer scrutiny.

Most of these pictures date to the “red car” era in Chicago, which began in the early 1920s and ended in 1954. But a few images are even older than that.

As always, if you can help identify locations, or have interesting facts or reminiscences to add, don’t hesitate to drop us a line. You can leave comments on this post, or write us directly at:

FYI there will be several additional posts in this series coming up in the near future, so watch this space.

This is our 92nd post, and we are gradually creating a body of work and an online resource for the benefit of all railfans, everywhere. To date, we received more than 86,000 page views from more than 25,000 individuals.

Today’s Landmark Century Theatres, a multiplex on the site of a former movie palace. 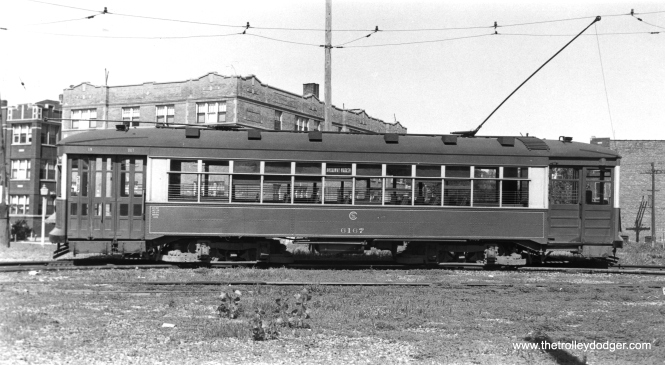 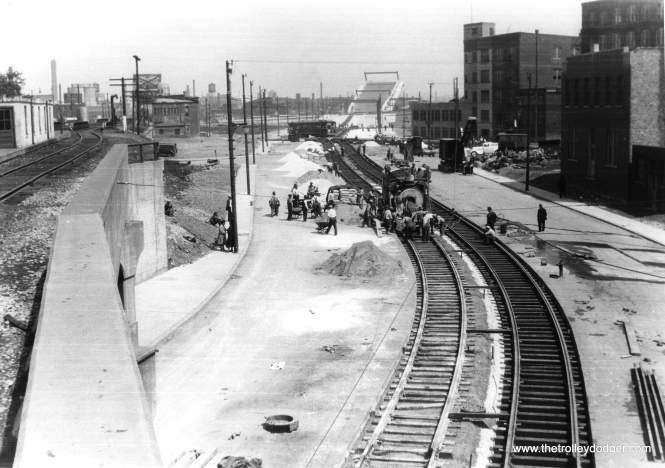 The extension of the Ashland streetcar across a new bridge over the Chicago River in 1936 was one of the last such line extensions by CSL. We previously posted a photo of the parade celebrating this line extension here:
https://thetrolleydodger.com/2015/02/28/chicago-streetcars-in-black-and-white-part-2/ (Edward Frank, Jr. Photo) Bill Shapotkin adds, “This pic was taken from the Clybourn C&NW passenger station (the platform for the S/B (timetable E/B) North Line (then Milwaukee Division) is visible at left) looking N/B on Ashland. Great pic!”

Clark and Devon in early days.

The east end of Navy Pier in early days, showing how streetcars originally ran on an upper level. 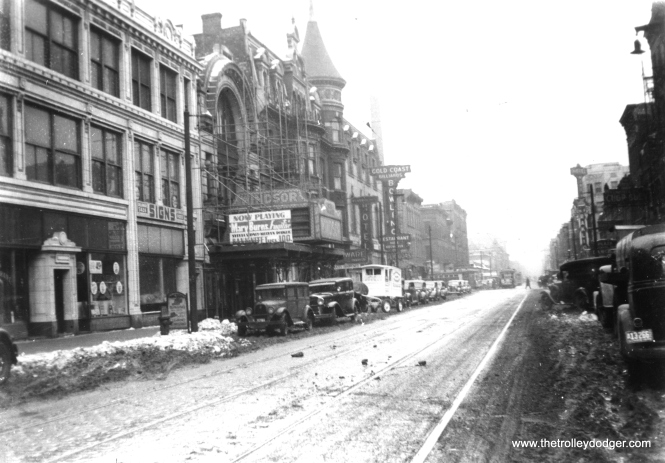 The old Windsor Theatre, which was located at 1225 N. Clark. The film Mary Burns, Fugitive (starring Sylvia Sidney and Melvyn Douglas) was released on November 15, 1935. The theatre is also advertising a “Bank Nite” raffle on Tuesdays. This was a Depression-era promotion that helped bring in customers.
Here is a plot summary of Mary Burns, Fugitive:
“A young woman who owns a coffee shop falls for a handsome young customer, unaware that he is a gangster. The association results in her being tried and sentenced to a long prison term. However, the authorities permit her to escape, hoping that she will lead them to her boyfriend.”
Sounds like a plot inspired at least in part by the story of how John Dillinger was fingered by the “Lady in Red” on July 22, 1934.
According to http://www.cinematreasures.org, “The Windsor Theatre was opened September 20, 1886. The theatre suffered two major fires, and was rebuilt in 1914, opening as part of the Lubliner & Trinz circuit on May 9, 1914. It was one of the earliest projects from the architectural firm of Rapp & Rapp. The theatre was later run by the H & E Balaban chain. It was located on Clark Street near Division Street, in the Gold Coast neighborhood.
The Windsor Theatre was remodeled by the architectural firm Pereira & Pereira in 1936. The Windsor Theatre operated into the late-1950’s, and was razed by 1961.
Today the site is occupied by condominiums and retail.” The scaffolding in this photo would indicate renovations were already underway when this photo was taken. (Edward Frank, Jr. Photo)

A Chicago streetcar railway post office car at Broadway and Ardmore. Such services ended in 1915, early in the CSL era. (Fred Borchert Photo)

Devon Station at Clark and Schreiber. Officially opened for business on April 1, 1901 by the Chicago Union Traction Company, predecessor to the Chicago Railways Company. 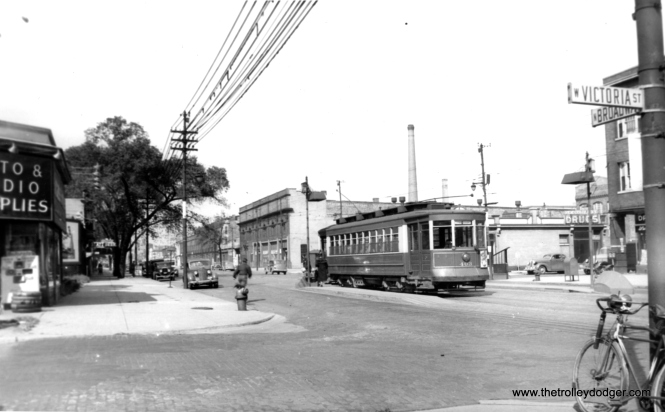 Broadway and Victoria (approx. 5744 N.) today. We are looking north. 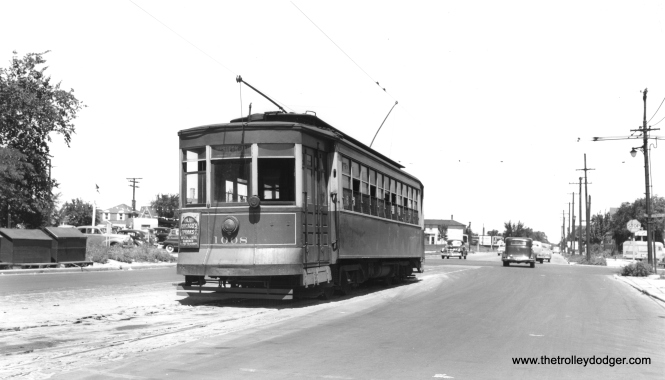 Western and Howard today, looking north into Evanston. At one time, many Chicago streetcar lines ended at the city limits, and cars simply stopped in the middle of the street, changed ends, and switched over to the other track to head on their way.

George Trapp writes, “875 on Devon followed by 169 class, both cars are pull outs from Devon barn for Western shortly before Western route shortened in Aug. 1948. 169 class cars used as two man on Western, Halsted and Ashland after being displaced by PCC’s on Broadway-State until CTA one manned them.” This is the corner of Devon and Western, because the Devon-North Town State Bank was then located at 2345 W. Devon. We are looking east. (Edward Frank, Jr. Photo) 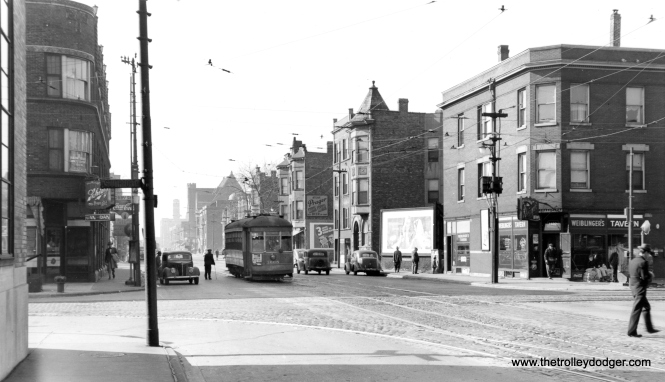 CSL 1665 is eastbound at Irving Park and Southport. You can see the corner of the New Deal-era Lakeview post office at left.

Irving Park and Southport today , we are looking west.

The area around Clark, Arthur, and Schreiber. 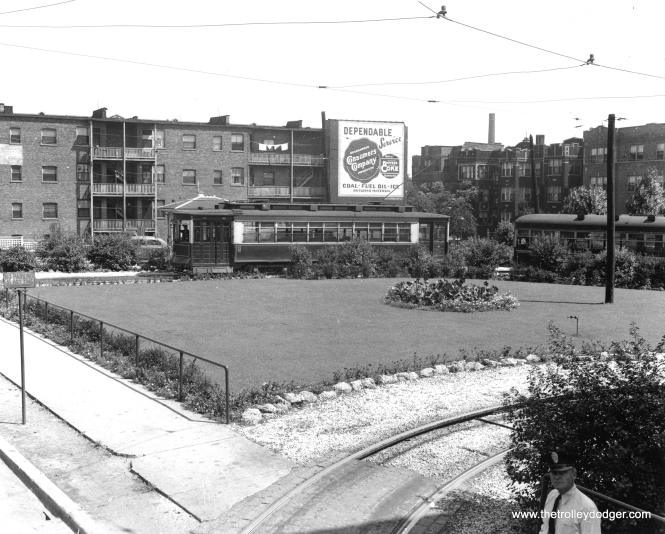 CSL 3362 and 3327. A view of the Clark-Schreiber loop, looking west from Ashland and Arthur. George Trapp writes, “The Schreiber loop was the loop via Ravenswood and Schreiber along the South side of the car barn yard generally used by
Broadway-State cars after PCC’s replaced the 169 class and the route cut back from Kedzie in Dec. 1947.” (Chicago Surface Lines Photo, Krambles-Peterson Archive)

CSL 1772 and 1771 at Devon and Ravenswood. (Krambles-Peterson Archive)

CSL 804 appears to be a Broadway-State car on Devon westbound at Clark, with the old Ridge Theater (1554 W. Devon) in the background. According to http://www.cinematreasures.org, “This Edgewater neighorhood theatre, while under management of the Lubliner & Trinz theatre chain, was originally known as the Ellantee Theatre and opened in 1919. The theatre was later renamed the Ridge Theatre. Long ago closed as a movie house, today the building houses a hardware store.” (Joe L. Diaz Photo)

The former Ridge Theater as it appears today.

CSL 977. This, and the next few pictures, were all taken at Ravenswood and Rosehill, by the Rosehill Cemetery. The building at left is a commuter rail station. (Joe L. Diaz Photo) 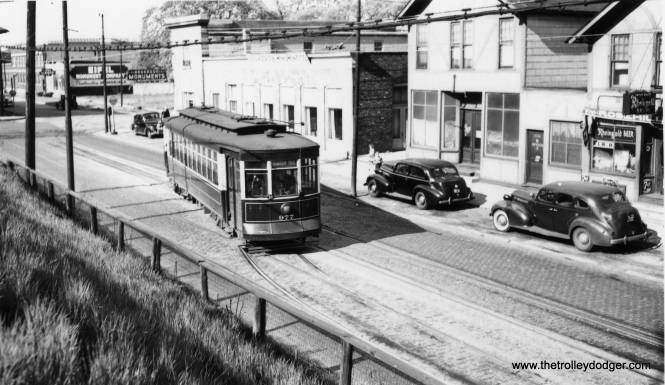 Ravenswood and Rosehill today. The building at right is still there, but the train station is long gone. 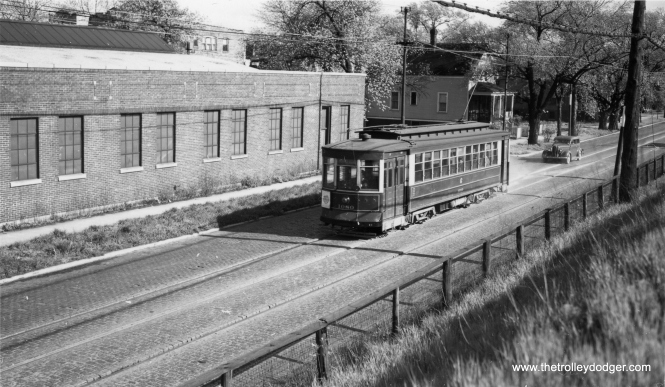