The event was well publicized. By the time I got to Clark and Lake around noon, there were hundreds of people waiting to ride historic cars 4271 and 4273, which were built in 1923. There was another train of 2400-series cars, which were retired a few years ago, but a lot fewer people were riding them.

In fact, some riders tried to board them without even realizing they were historic cars. They look very similar to current equipment.

This reminded me of stores I have heard about late 1950s streetcar fantrips here in Chicago. Although red cars were last used in regular service in 1954, they were such a familiar sight to Chicagoans that some tried to board the fantrip cars without realizing these type of cars were no longer being used.

On the way downtown via the Blue Line, I noticed a freight train running on the B&OCT, a rare occurrence nowadays. I also saw a work train, where a flatcar was being hauled by six 2400s. Using retired equipment in work service is a practice railroads have done for a long time.

When the CTA retired the last 4000s in 1973, only two cars were kept. In retrospect, it would have been preferable to have saved more, as evidenced by the large crowds yesterday. But at least something was saved.

Unfortunately, when the iconic 6000s were retired in the 1990s, none were retained as historic cars. The same is true of the 2200s, the last series with “blinker doors.” To see examples of these cars, you will need to visit a trolley museum.

I was one of the lucky few who snagged a poster, but there was no way I could get on the 4000s train at Clark and Lake. So I rode a few stops down, got some pictures, and crowded into the train, which had a “crush load.”

To me, the best part of the 4000s is the gear noise they make when accelerating. While I did not shoot any video yesterday, figuring many other people would fill that gap, I did make some audio recordings, which I hope to post at a future date.

After riding to LaSalle and Van Buren, I got off for some more pictures, before riding the 2400s back to Clark and Lake. A fine, if crowded, time was had by all.

A rare freight on the B&OCT in Oak Park. 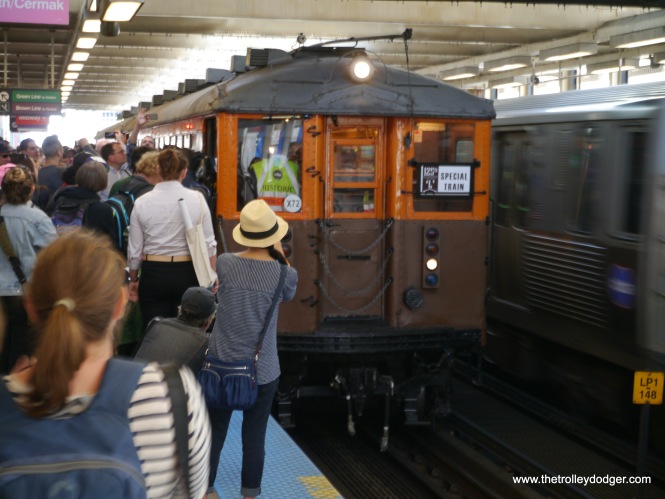 Hundreds attempt to board the special train at Clark and Lake. 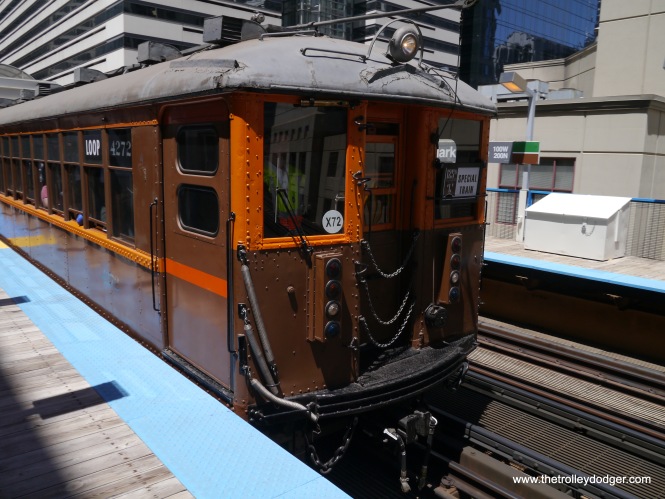 Between Clark and State. 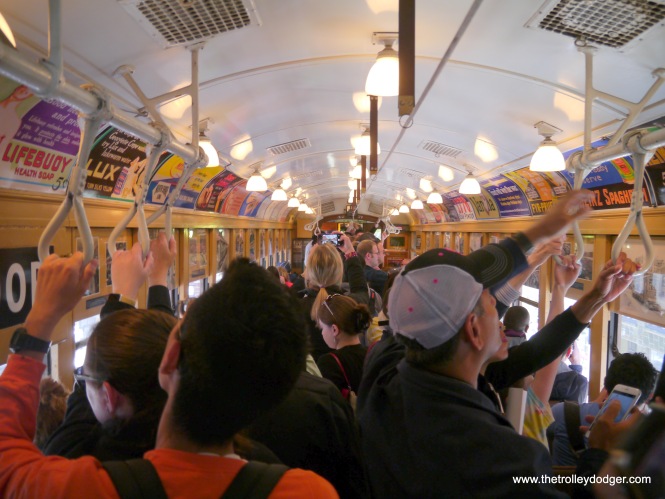 An out of service train passes while we wait for the 4000s.

4000s between Library and LaSalle.

4000s between Library and LaSalle.

Riders on the historic train also received vintage paper transfers, which are no longer in use. 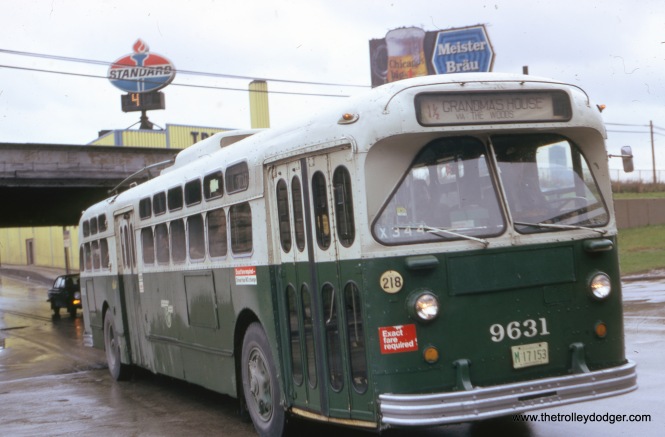 Here are some photos from the last Chicago trolley bus fantrips, sponsored by the Omnibus Society of America. The April 1, 1973 trip took place one week after the last regular trolley bus runs on the CTA. Immediately after this trip, the last two trolley buses to run in Chicago were towed to the Illinois Railway Museum, which now has an operating trolley bus loop. The buses used were all built by Marmon-Herrington.

According to one of the participants on the April 1, 1973 trip, in the week since regular TB service had quit, wires were already removed from a short stretch on North Avenue, near the Kennedy Expressway. Chances are, this was done to provide trucks with greater clearance. 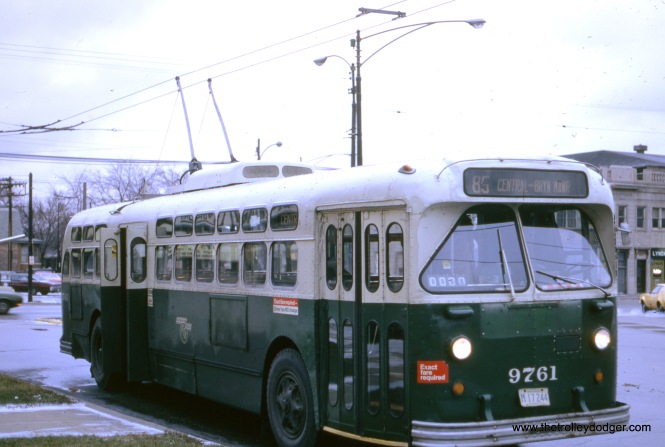 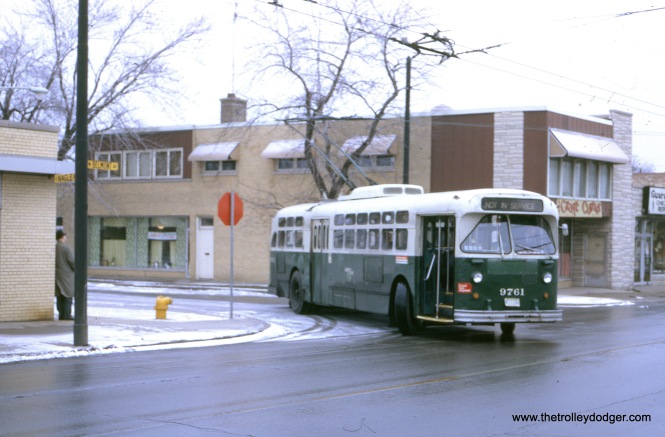 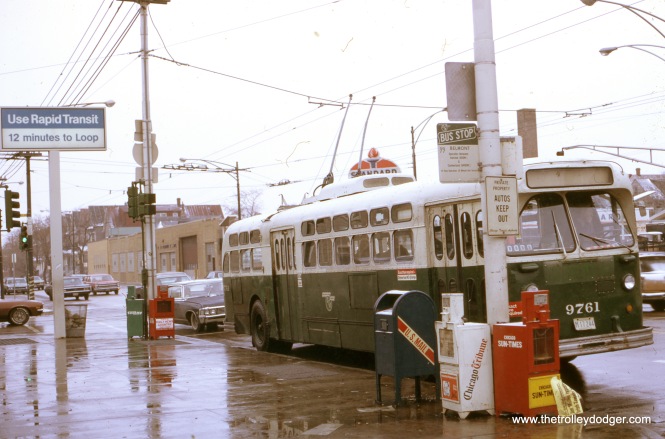 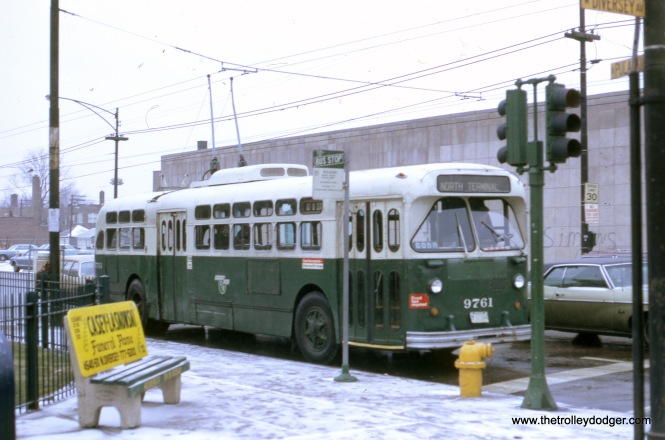 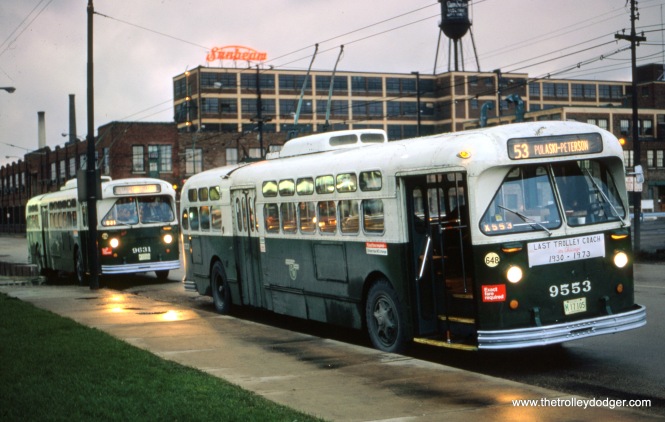 Pulaski Road at Diversey, with the old Marshall Fields man-made waterfall in the background, December 3, 1972. 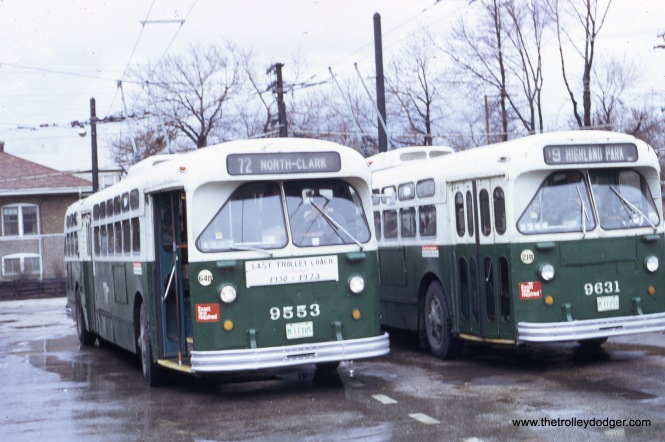 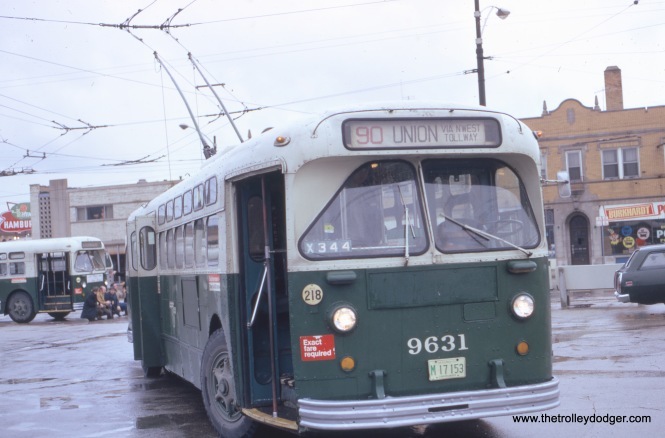 Fullerton at Parkside, April 1, 1973. This bus turnaround has since been removed.

Work continues on our upcoming book Chicago Trolleys, which is now in the layout and proofreading stage. The expected publication date is September 25th of this year. We will keep you advised as things progress. 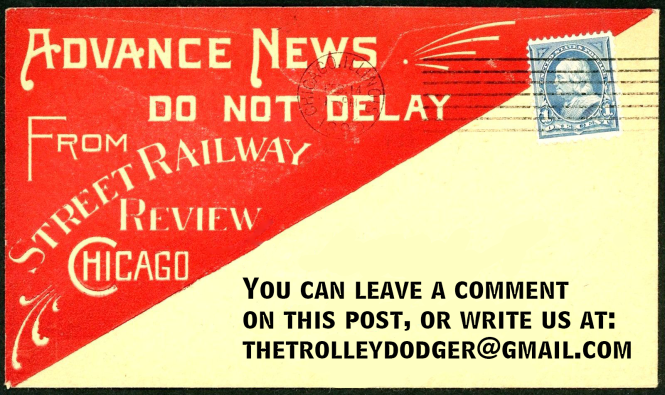 This is our 184th post, and we are gradually creating a body of work and an online resource for the benefit of all railfans, everywhere. To date, we have received over 291,000 page views, for which we are very grateful.

You can help us continue our original transit research by checking out the fine products in our Online Store.

In order to continue giving you the kinds of historic railroad images that you have come to expect from The Trolley Dodger, we need your help and support. It costs money to maintain this website, and to do the sort of historic research that is our specialty.

Your financial contributions help make this web site better, and are greatly appreciated.