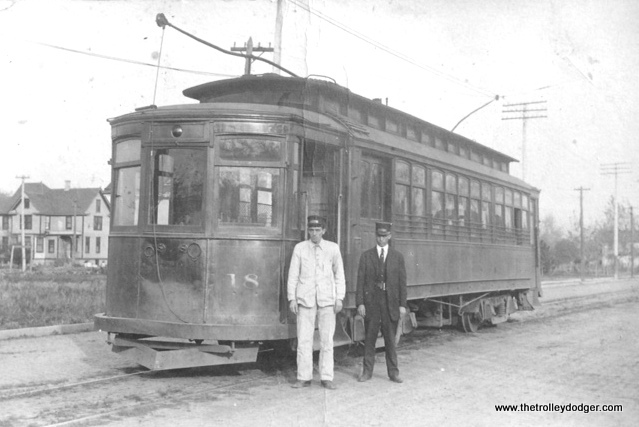 I’m attaching a photo of my grandfather, Arthur Defenbaugh from Streator, who was a conductor on the Streator to Ottawa branch, with his engineer, standing in front of their trolley. I don’t know when or where the picture was taken. We think it was Streator. I believe it was in the late 20’s as this is a metal trolley car. The trolley car number appears to be 18. I read on your website that you don’t have many operational era photos for the CO&P. I thought you would enjoy it.

If you have information about my grandfather or the other gentleman, please let me know.

Arthur Ingram Defenbaugh was born on October 6, 1881, and died in July 1972, aged 90. It appears he spent most of his working life as a farmer. His wife died in 1926 and it does not appear he ever remarried.

If any of our readers have additional information, please let us know, thanks.

Dave Barrett recently did some volunteer work on Toronto’s sole remaining Peter Witt streetcar (whiich is now 93 years old) at Hillcrest shops, to get the car ready for the annual Beaches Easter parade. He has generously shared his photos of car 2766 with us: 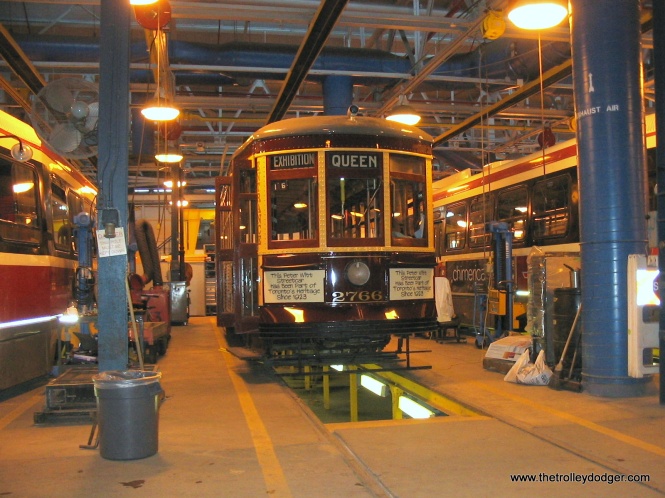 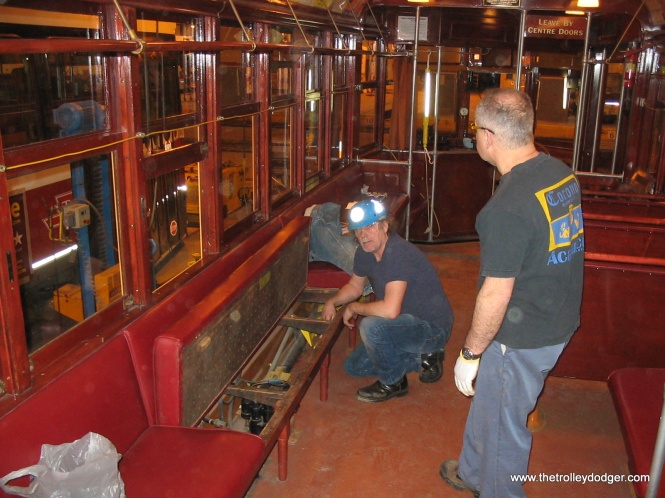 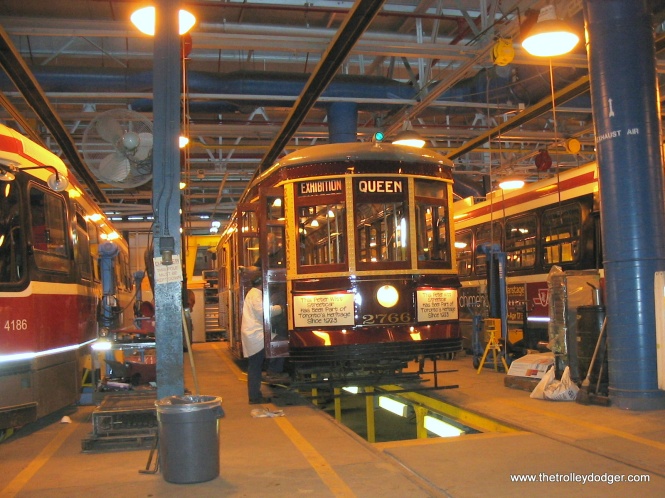 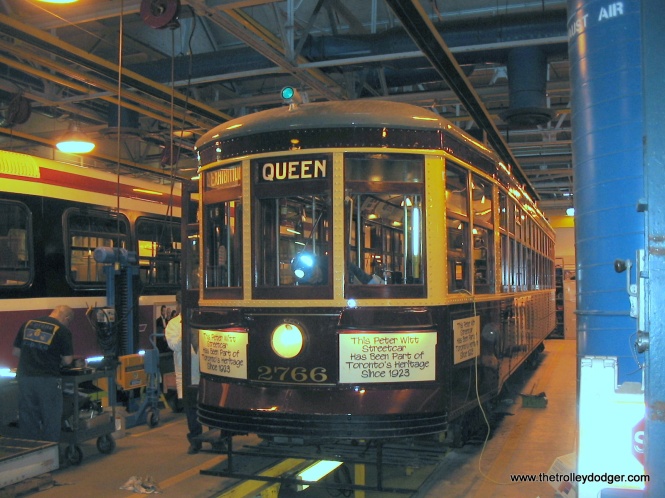 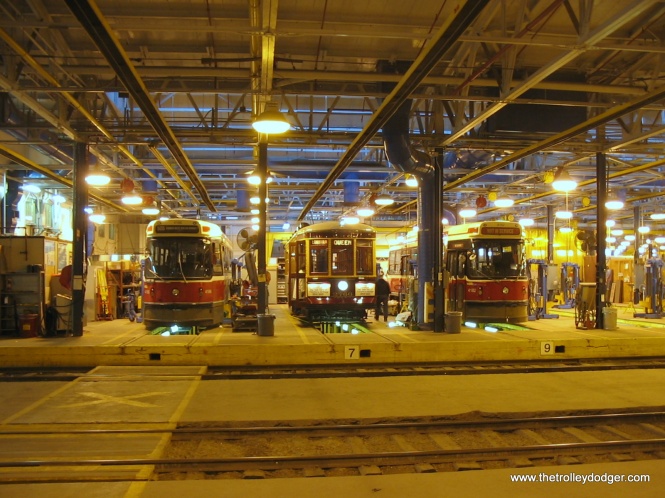 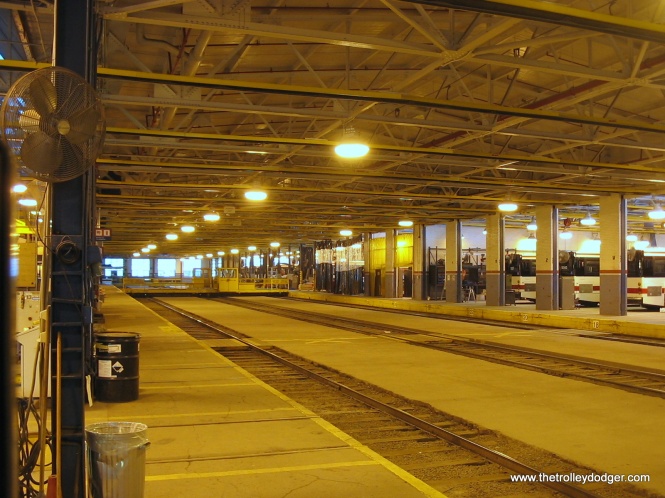 In this note I want to comment about photos of Indiana Ave. and Harvard Ave. in Chicago Rapid Transit Photos, Part Three (March 23, 2016).

You show the South Side L Indiana Ave. station in two pictures. I saw Andre Kristopans’ comment at the bottom, and I learned something from his comment: I had no idea the middle track west of the station was used for storing spare Stock Yards L cars. But I am sure Andre is correct.

The first photo shows a bigger scope. Let me start with the platform at the right.

Notice that the section of wood nearest the track looks newer than the wood under the cover. This is because the newer wood was constructed over the third track that went through the station. Yes, there were three tracks on the north / south main. The three tracks actually continued east of the station, then south on the north / south main to just north of the 43rd St. station, where the easternmost track merged into the middle track.

Also, prior to (I think) 1949, the Kenwood L did not end at Indiana Ave. Instead, it went downtown onto the Loop. I’m not sure where it went from the Loop — some sources say to Ravenswood, others say to Wilson. My own experience is that the Englewood ran to Ravenswood, and the Jackson Park ran to Howard, through the State St. subway. And I think the Kenwood ran to Wilson. There were several smaller stations north of Indiana that were serviced by the Kenwood L. The Englewood and Jackson Park were supposed to be express through that area but were frequently delayed by being behind Kenwood trains.

Back at the Indiana station, both the Kenwood trains and the Englewood / Jackson Park trains used the two outer tracks of the three-track main. South/east-bound Kenwood trains crossed over from the southernmost main track to the Kenwood L structure to head east.

Later, when the Kenwood was cut back to shuttle service from Indiana to 42nd Place, the wood was added to cover most of the north/westernmost outer main track, leaving (at the east end of the platform) the terminal for the Kenwood shuttle. As I recall, that space could accommodate two cars. When Kenwood cars needed service, they turned south onto the easternmost main track, merged into the northbound main near 43rd St., switched over to the southbound main, and made their way to the Jackson Park yards at 61st St. and lower 63rd St.

So the photo shows two main tracks through the station, which had been the middle and south/westernmost tracks of the three-track setup.

Regarding the platform at the left, you see that the Stock Yards L terminated on the south side of that platform. Its only connection to the rest of the L system was the set of switches west of the Indiana station.

Now, on to the picture showing the Normal Park L shuttle. I think it was in 1949 that the CTA relegated the Normal Park line to shuttle service. Before that, the Normal Park cars were hitched onto the rear of Englewood trains. So people riding the Englewood L southbound had to be alert that the last car would be split off and go to 69th and Normal. If someone was in the wrong car, he/she could move between cars, which is apparently taboo today.

The structures along the sides of the L track are where the connections were made and unmade. Workers were stationed there to do this. Yes, even in frigid weather. And with live third rails. OSHA would have had a fit. The motormen of northbound Normal Park trains rode the trains into the Harvard station, then down and under to the southbound platform, then onto the last car of incoming southbound trains.

You also see in the distance the switch tower where the Normal Park line branched off to the south.

When the Normal Park line became shuttle service, northbound trains went into the Harvard station. The motorman quickly changed ends, then immediately (so as not to delay northbound Englewood trains) proceeded to the switch over to the south/west-bound track. You can see this switch next to the bigger structure.

In the photo, I have no idea why the motorman of the Normal Park car is standing in the walkway between the tracks. Perhaps this picture was deliberately posed.

This photo was taken from the southwest end of the south/west-bound L platform at Harvard. The address on the food shop below is 6316 S. Harvard. Busy 63rd St. was just to the right, and a block south at 64th St. and Harvard Ave. was St. Bernard’s Hospital, which I believe is still there. Two blocks east of the Harvard L station was Englewood Union Station (New York Central, Nickel Plate, Pennsylvania, Rock Island), and three blocks west was the other Englewood train station (Erie, Monon, Wabash, Chicago and Eastern Illinois, Chicago and Western Indiana). Plus, there were several streetcar lines. All told, for a fan of anything on rails, it was nirvana. 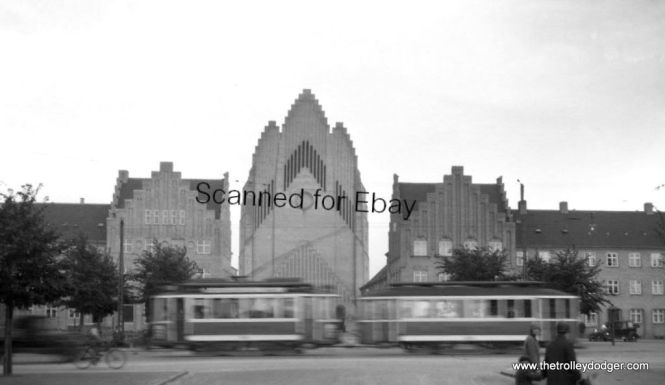 I recently wrote to the Chicagotransit Yahoo discussion group about the above photo:

There’s a photo negative on eBay that is identified as showing a couple streetcars at the 1933-34 Chicago World’s Fair. Yet I don’t recognize where this could have been taken there.

I know that Chicago Surface Lines had a couple of line extensions built to bring people to the fair, but was not aware of any trolleys on the grounds themselves.

Is the photo misidentified, and if so, what does it actually show? To me, it looks like it could have been taken in Europe.

The famous Copenhagen church (Grundtvigskirke) just behind the trams might be a good clue.

Pardon my stupidity, but I assume you mean the famous Copenhagen church in Copenhagen, and not one that was moved, brick by brick, to the 1933-34 Chicago World’s Fair?

I wonder what it was about this picture that made the seller guess that it was taken in Chicago. For transit on the fair grounds themselves, I am pretty sure they used buses of a type similar to those used at the 1939-40 New York World’s Fair.

The Century of Progress grounds stretched for three miles along the lakefront, from Roosevelt to 39th. Greyhound got the concession for motorized transport within the fairgrounds, driving these open-air trailer conveyances along a portion of Leif Eriksen Drive that later was part of South Lake Shore Drive.

Within the exhibits area, where motorized vehicles weren’t allowed, you could ride in a pushchair, providing summer employment to dozens of high school and college students.

Similar buses (actually, they look more like trucks) were also used at the 1939-40 NY World’s Fair. As it tuns out, they were not the same vehicles. This is explained in an article from Hemmings Motor News.

Apparently, the Chicago buses used at the fair were one-offs made by General Motors.

There were at least two types of buses used at the New York World’s Fair, a “tractor train” and a more streamlined bus. Neither looks much like the ones used in Chicago. The streamlined buses were made by Yellow Coach. 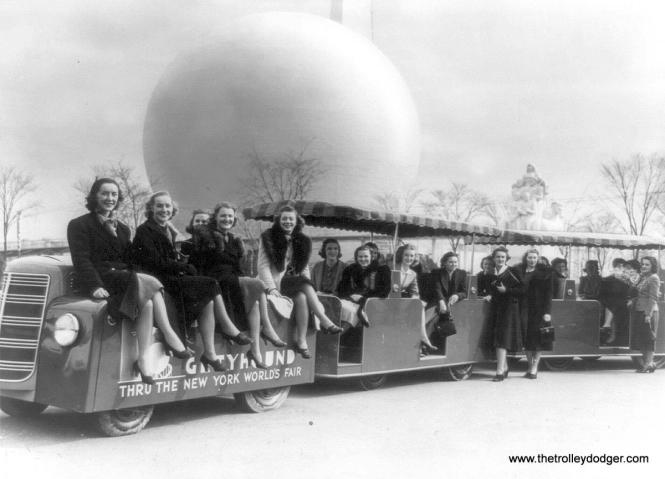 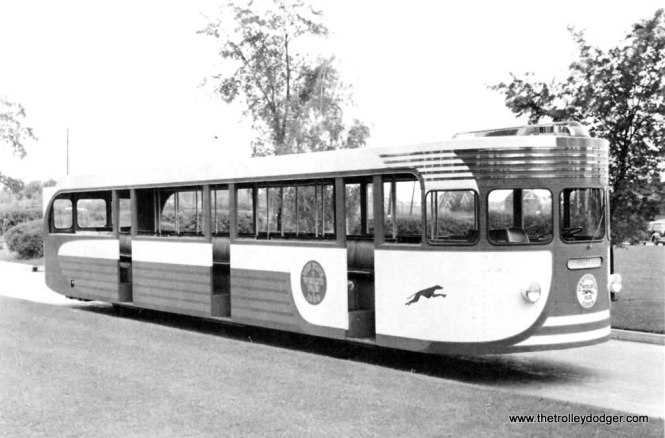 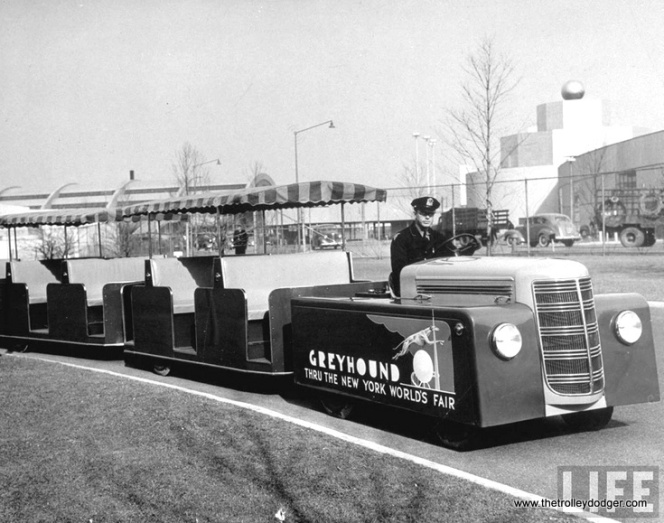 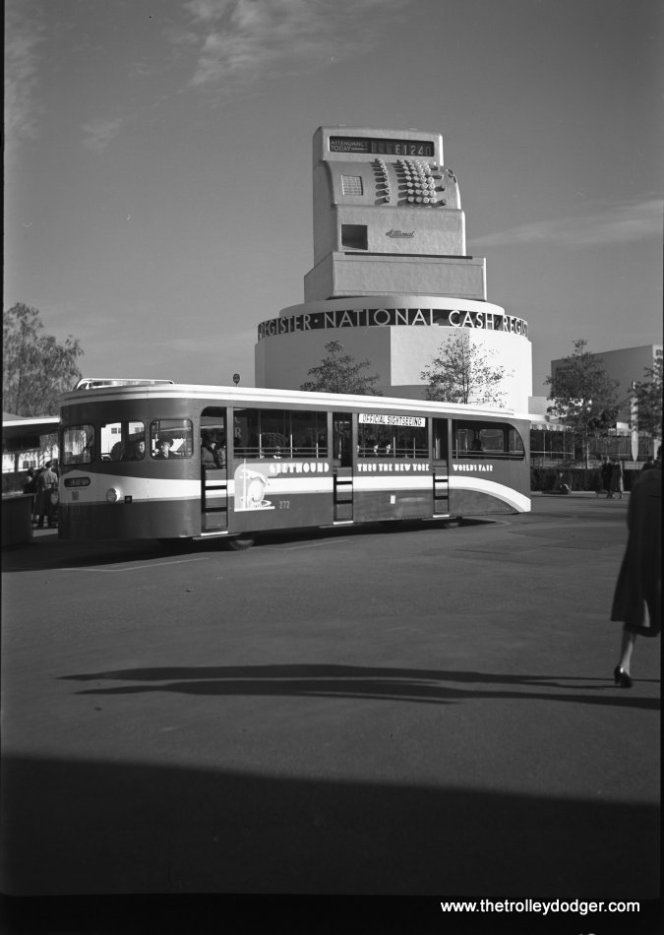 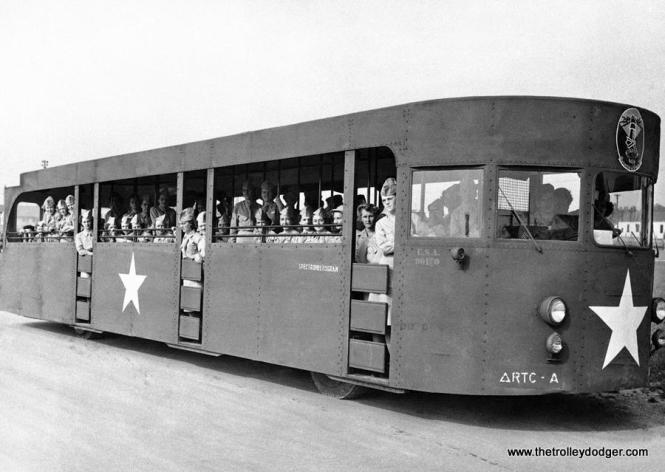 After the fair ended in 1940, some of the streamlined buses were used to transport WAACs.

The question has been raised as to whether or not the Chicago buses were then sold to Bowen Motor Coach for use at the Texas Centennial Exposition in 1936. You can see pictures of the Texas buses below, and there is also a quick view of them in a video clip here.

At this point, it’s not clear whether they were the same buses that were used in Chicago with a bit of new sheet metal attached, or simply similar buses built later by General Motors. 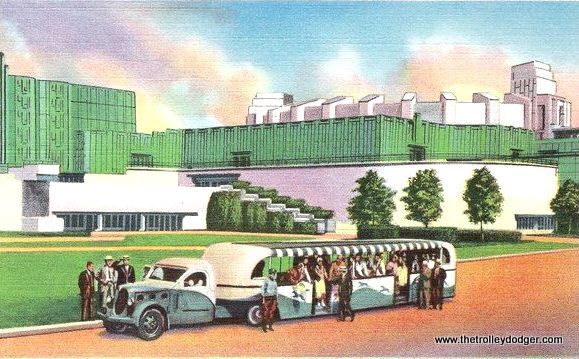 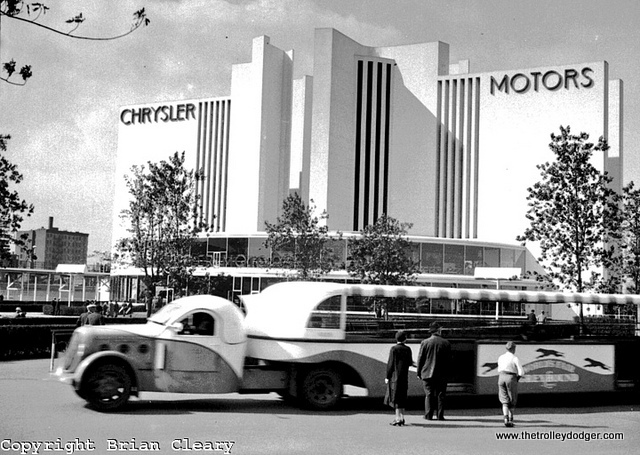 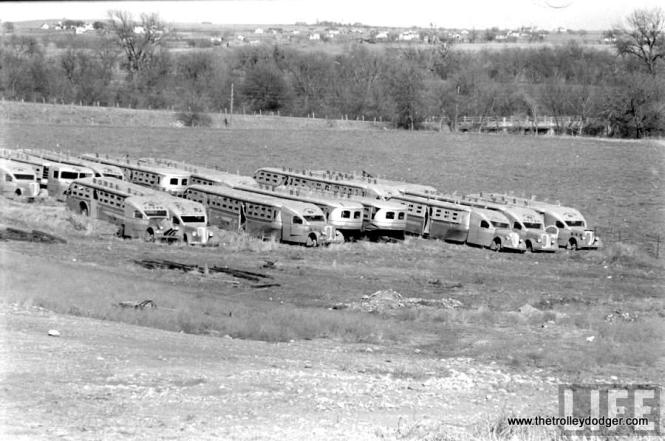 Buses purported to be those from the 1933-34 World’s Fair, shown in Texas in 1939, where they were owned by the Bowen Bus Company. 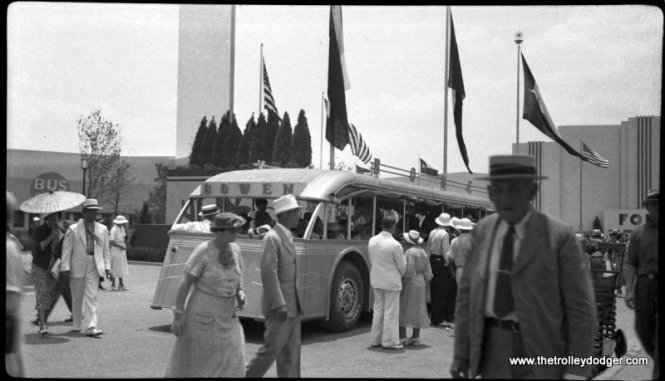 A Bowen bus at the Texas Centennial Exposition in 1936. (J. Elmore Hudson Photo) 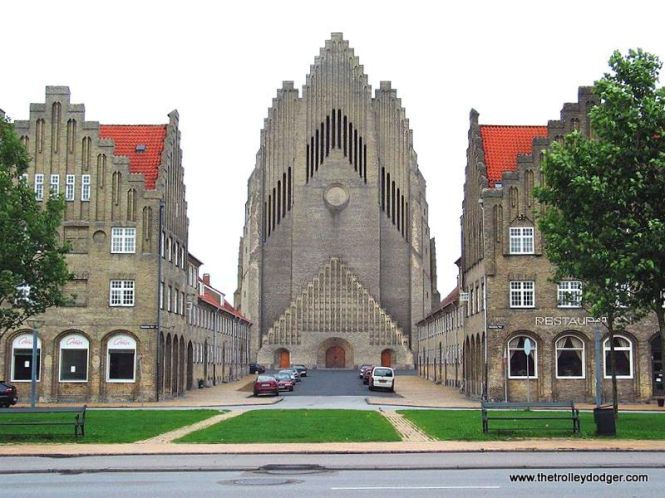 FYI, we have added another Liberty Bell Limited photo to our recent post Alphabet Soup (March 15, 2016): 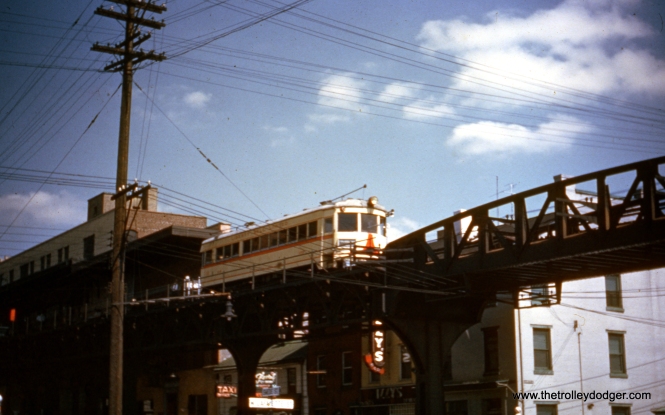 We have a unique opportunity to buy a 16″ transcription disc made by the Chicago Surface Lines‘ public relations department in 1939. Chances are, this is a 30-minute radio program promoting CSL, most likely played a few times on local radio stations, and has been unheard since then. The script was written by Hollis Farley Peck (1909-1971).

For all we know, this recording may include the sounds of Chicago streetcars, which would be very rare.

It will not be easy to play this record due to the large (16″) size. Although this is a 33 1/3 rpm record, it used the same technology as the 78 rpm records of its time. The current LP system of vinyl records did not come about until 1948.

Such large recordings were necessary to provide a longer running time than a standard 78 rpm record, which could only last about 3:20. I assume that each side of this transcription disc has 15 minutes on it.

Once I have the record, I plan to consult with the Museum of Broadcast Communications here in Chicago. Possibly they may have the necessary equipment for playing it. If a successful recording can be made, we will digitally remaster it and issue it on a compact disc.

If MBC can help us, we may donate the original disc to the museum for their collection. After all, this is local history.

However, before we can do that, we first have to complete the purchase. If you can help contribute to the $60 cost of this rare recording, your donation will be greatly appreciated.

In order to continue giving you the kinds of historic railroad images that you have come to expect from The Trolley Dodger, we need your help and support. It costs money to maintain this website, and to do the sort of historic research that is our specialty. Your financial contributions help make this possible and are greatly appreciated. 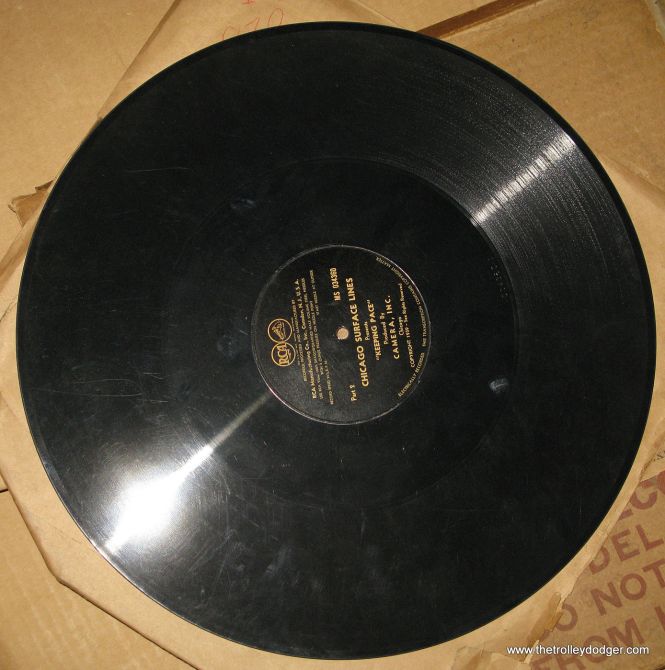 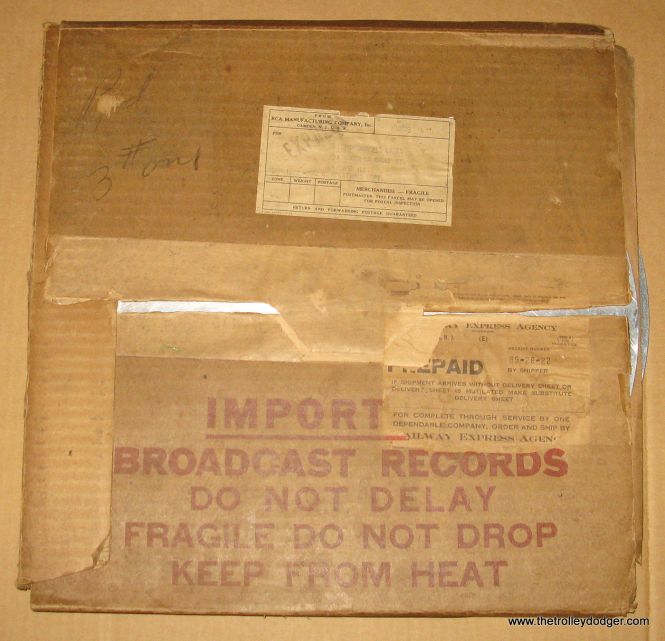 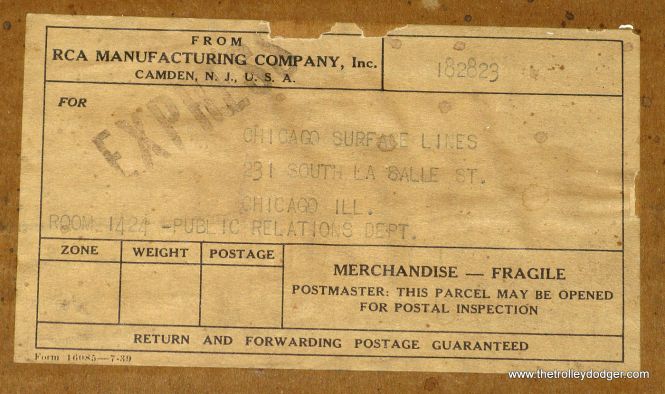 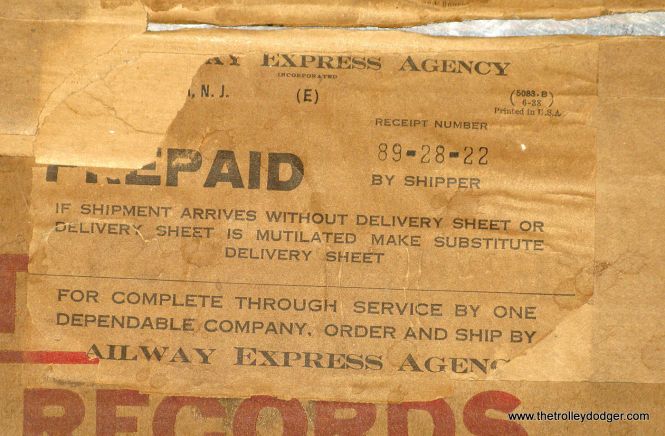 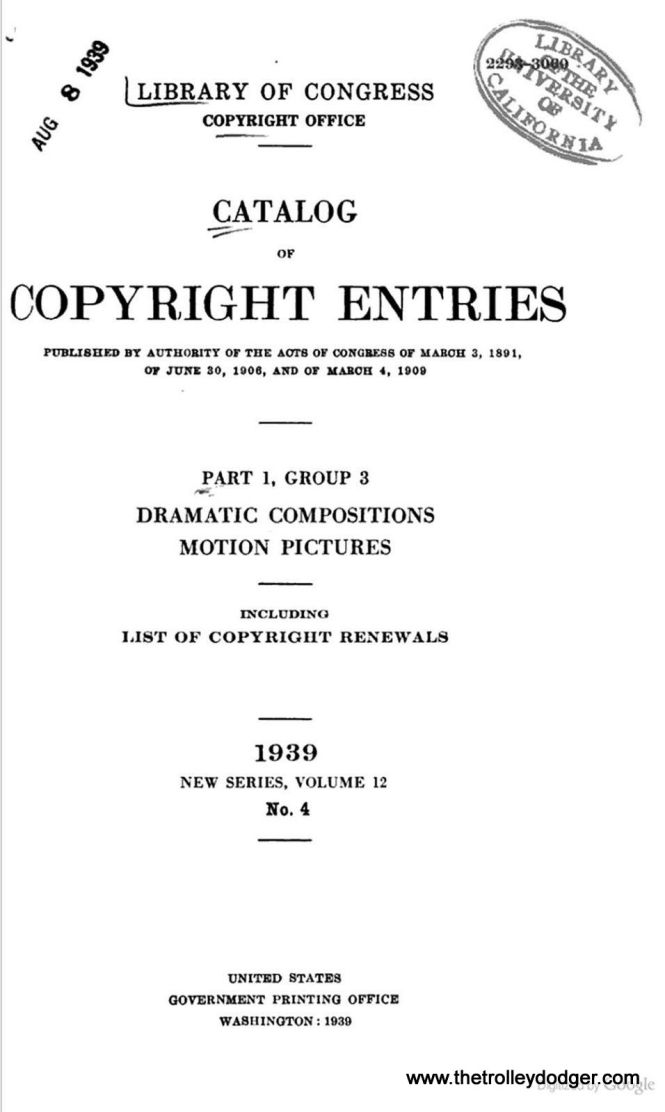 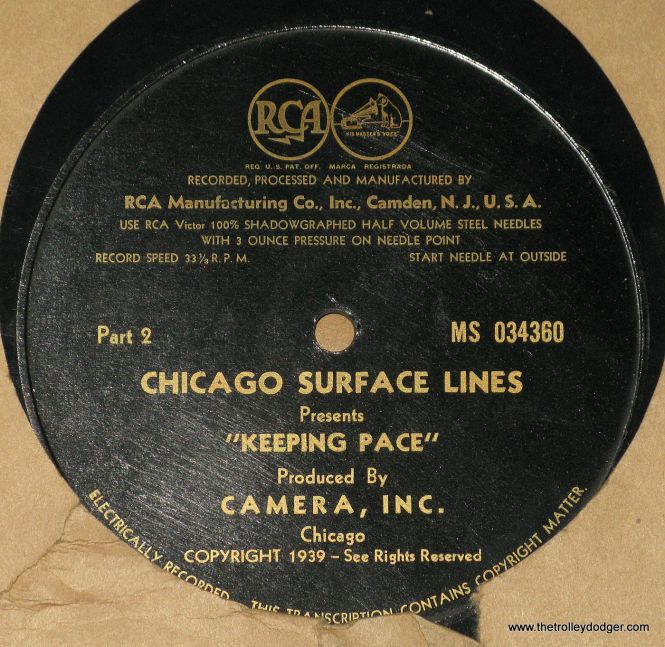 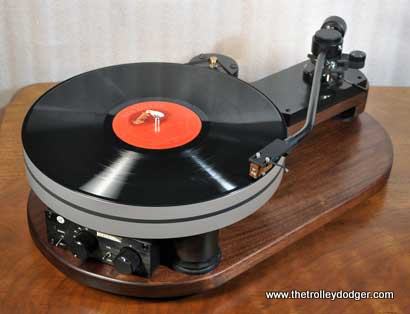 Specialized equipment is required to play a 16″ transcription disc. This is one such turntable made by Esoteric Sound. 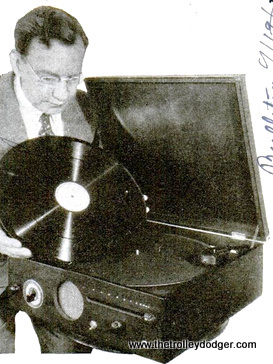 A 1936 phonograph for playing transcription discs. This one played records from the inside out, with a maximum running time of one hour per side. 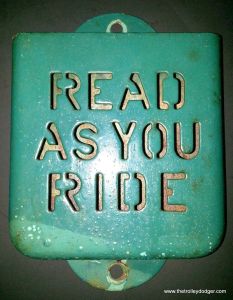 This is our 130th post, and we are gradually creating a body of work and an online resource for the benefit of all railfans, everywhere. To date, we have received over 141,000 page views, for which we are very grateful.