The iconic facade of Central Camera, one of the last remaining old-style camera stores in the Midwest.

Today we will explore the close relationship between railfans, their cameras, and their favorite camera stores. Nowadays, photography has truly become both easy and democratic, in the sense that most people now carry around with them a cell phone that is capable of taking surprisingly good pictures. You see the results immediately, so there is a very short learning curve. If your picture doesn’t come out as intended, you simply take another.

Chances are most railfans became photographers out of sheer necessity. They were fascinated by railroads and wanted to study pictures of them, yet had no idea where to find such pictures. So, they bought a camera and went out and made every mistake imaginable.

They learned by doing, and over time, many railfans became excellent photographers, whose work is on a par with, and every bit as important, as any other shutterbug’s.

Pieritz Brothers office supply store in Oak Park, in business since 1895, has a sign in the window that says, “If you buy here, we will be here.” The same is true of camera stores, which were once commonplace but have now largely disappeared from the American scene.

Perhaps in the future everyone will order their goods online and have them delivered to their door by drone aircraft, but time was, if you needed to buy film, have film developed, buy a camera, or learn how to operate it, you went to your friendly neighborhood camera shop.

There was a time when cameras were not commodities, and people depended on the experience and expertise of the over-the-counter sales person, who would spend time going over the features and even critique their pictures.

In my own Chicago neighborhood, there was the Montclare Camera Company, on the same block as the Montclare Theatre. In the early 1960s, when I was in grade school, perhaps 25% of a camera store’s business involved home movies.

It was a common thing to joke about back then how your friends or relatives would invite you over to their place for an evening of really bad home movies of their latest vacation or someone’s backyard birthday party. You could only record about three minutes of film on an entire reel. For some reason, the market for home movies had largely dried up even before portable video camcorders became available.

In the early 20th century, enlargers were not commonplace. If you took your roll of film to the photofinisher, a camera shop or drug store, they would make contact prints of your black-and-white film that were the same size as the original negative. To yield a decent sized print, the film had to be very large as a result. Sometimes these large negatives can yield extremely sharp images today.

Many people would take these prints and put them into photo albums purchased at their local dime store, often using paper corners to adhere them to the black paper. By the 1930s, railfans began trading and selling photos to each other. In some cases, they put together elaborate dossiers about certain railroads, complete with original photos and clippings from newspapers and magazines. Others tried to compile complete sets of “roster shots” showing entire fleets of streetcars and interurbans.

Among these early railfans is the venerable Malcolm McCarter, last living survivor of the original 10 founding members of the Illinois Railway Museum. He has been selling railfan photographs for 76 years now and may very well still print them himself, from his vast collection of negatives. You will find his catalog online here.

There was so much to ride at one time, and yet those years must have been, in some sense, depressing. There was one abandonment after another, a nearly endless litany of bad news. We can be thankful for those early fans who were involved, in one way or another, in historic preservation, either through the fledgling railway museums, documenting things through photographs, or both.

Fortunately some of these same fans have lived long enough to see electric railways undergo a world-wide renaissance, with new systems and extensions cropping up all over. Their hard work in preserving this history has now been more than validated.

Naturally, over the years, railfan photographers had their favorite camera stores. The biggest and best in Chicago were downtown.

Altman’s was legendary and was like a “Noah’s Ark” of camera stores, with two of every camera or lens imaginable– one to show and one to go. I am sure there are still many Chicagoans “of a certain age” who have fond memories of Shutan, Helix, Standard Photo, Lion Photo, Terminal Photo, and many others that are now gone by the wayside.

And of these, Central Camera on Wabash somehow remains, after 116 years in business. It has become part of history itself.

There is a photo of a prewar Chicago PCC streetcar, taken by the late Robert W. Gibson, on page 61 of Chicago Streetcar Pictorial: The PCC Car Era, 1936-1958, with Central Camera in the background. The store is still in the same location today.

The book collects the work of many unheralded railfan photographers who all turned out to be, in their own way, both transit historians and historic preservationists.

As a co-author, I was recently pleased to discover that Central Camera is now selling copies of the Chicago Streetcar Pictorial and has one on display in their front window, alongside the old Kodak Six-Twenty folding camera, the twin-lens Rolleiflexes, Leicas and such.

Yes, I know that in the long run, it is an uphill battle to keep up with the Amazons of the world. But even in the 21st century, shouldn’t there be enough room left in this world for a few old-fashioned camera stores?

PS- You can help keep our own doors open by checking out the many fine offerings in our Online Store. You can also make a donation there. We thank you for your support. 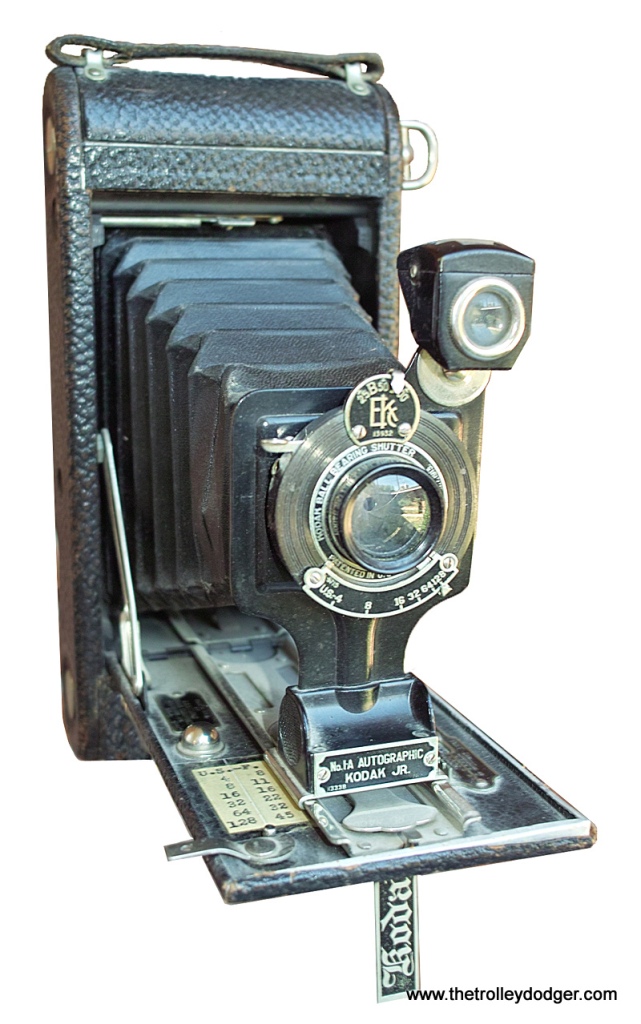 A typical folding camera of the early 20th century, this Kodak Autographic camera too very large size 116 black-and-white roll film. The “autographic” feature allowed the photographer to write notes on the actual film negative itself through a door on the back of the camera. The roll film was protected by a paper backing.

This streamlined Bakelite Kodak Bantam camera, which used size 828 film, was the state of the art in 1938 but few railfans could afford to buy one.

Thousands of railfans across America got their start with an inexpensive Argus C3, commonly referred to as “the Brick.” 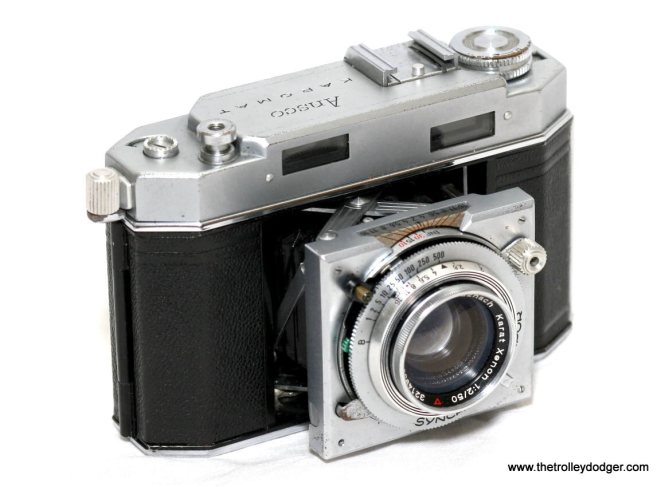 Truman Hefner took many great pictures with a German Karomat camera similar to this one, which has a high-quality Schneider lens. 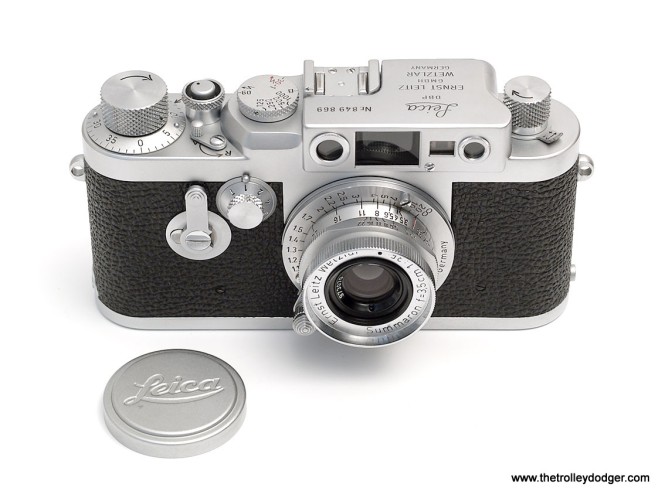 The late Bill Hoffman’s last camera was a late 1950s screw-mount Leica IIIg similar to this one. After his passing in the late 1980s, I received his Leica as a gift. 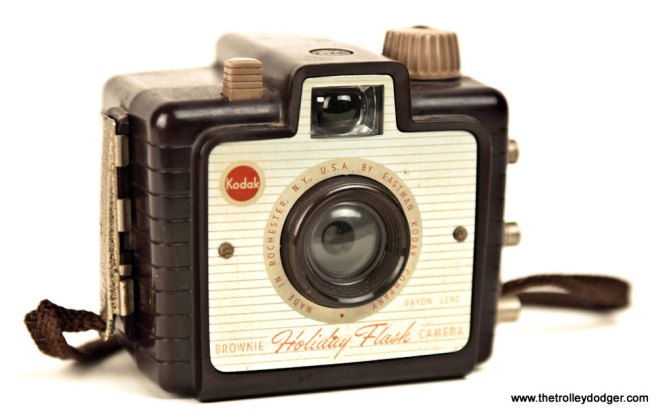 My own first camera, a Kodak Brownie Holiday Flash camera, circa 1963. It took size 127 roll film, then the most popular format on the market.

For many years, Ray DeGroote took pictures with a German circa-1965 Kodak Retina Reflex III like this one. The gridlike patch at top left is a chemical-based light meter.

Even when there is no other dating information on an original 35mm Kodachrome slide, it can be dated to some extent by the type of mount used. 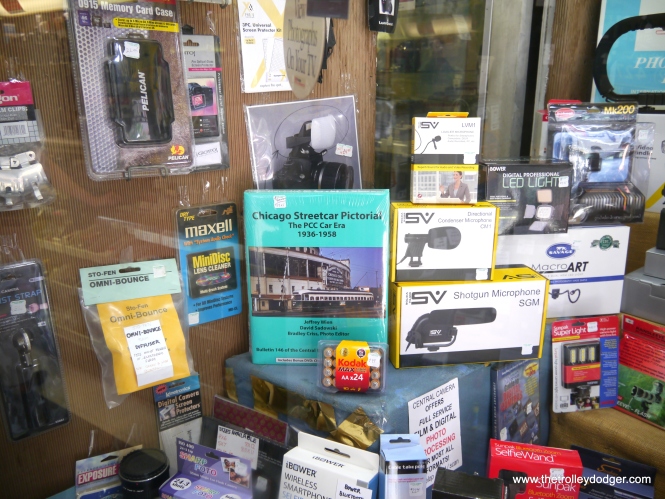 One anonymous railfan’s album on clippings, titled “Roads which have Chicago as their first name.” This title is written out twice, followed by “except CNS&M in separate album.” Interestingly, the album has a section on the Aurora, Elgin & Fox River Electric, which does not have Chicago in its first name.

Chicago, Aurora & Elgin car 408 is in pretty sad shape in this photo taken just prior to its scrapping in 1962. It was a sister car to 409, which was sold to Trolleyville USA and came to the Illinois Railway Museum in 2009. We can be fortunate that there were enterprising railfan photographers who documented the last days of the “Roarin’ Elgin.” 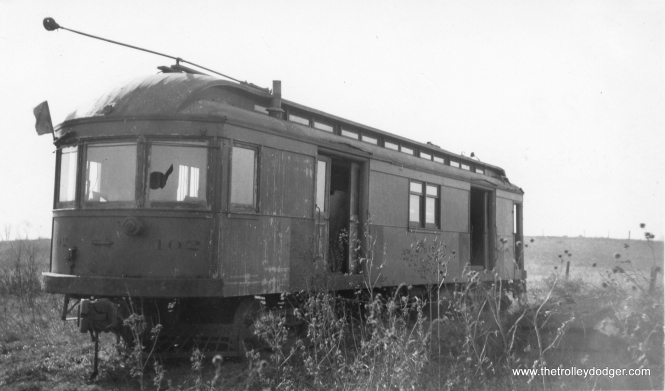 Car 102 of the the Elgin Belvidere & Rockford sits forlornly in Marengo in this June 1937 photograph. By then, the line, which quit service on March 9, 1930, had been abandoned for more than seven years. Owner Bion J. Arnold kept these cars in storage in the futile hope that a buyer could be found. We can thank the unknown photographer who preserved this small slice of history.

Elgin Belvidere & Rockford car 203 was built by St. Louis Car Company in 1906. It was 31 years old when this photo was taken in 1937 in Marengo. A portion of the Elgin & Belvidere interurban right-of-way now serves as the main line for the Illinois Railway Museum in Union. An original Elgin & Belvidere motorman lived long enough to operate a car over the new right of way when the museum began operations here in the 1960s.

9 thoughts on “Railfans, Their Cameras, and Camera Stores”