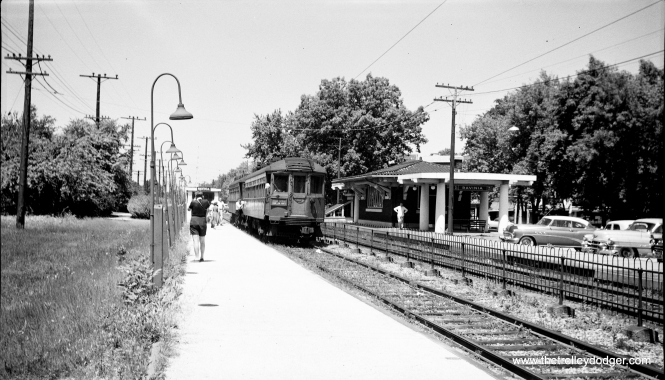 This is the second of a two-part series on the Chicago, North Shore and Milwaukee interurban that ran between Chicago and Milwaukee until January 21, 1963. (You will find the first installment here.)

Here are nearly two dozen classic North Shore Line images in glorious black-and-white, from some legendary railfan shutterbugs. We were lucky enough to track down the original negatives for all of today’s pictures, which even include a couple that measure 4×5 inches.

The late C. Edward Hedstrom, Jr. (1918-2009) took the Shore Line photo (reproduced above) at Ravinia on the final day of service, July 24, 1955. He was employed by the South Shore Line, mainly as a motorman, from 1939 until he retired in 1983, following in his father’s footsteps. C. Edward Hedstrom Sr. worked there from 1921 to 1960, so their combined South Shore service covers 63 years. Chances are Mr. Hedstrom also took the other 1955 Shore Line photo we are featuring today, but it is not so marked.

Today’s photos show how much variety there once was in North Shore Line operations, including the Shore Line as well as the Skokie Valley Route, the branch line between Mundelein and Lake Bluff, city streetcars (including Birneys), freight locos as well as merchandise dispatch. It was quite an operation.

There is a trail now along much of the Shore Line Route, which has now been gone for 60 years. But the memories of this fine interurban railroad live on.

PS- If you enjoy seeing these great images, check out the fine offerings in our Online Store. The proceeds help support the original research that our readers like. We need your help and support to continue this work in the future, for the benefit of all railfans, everywhere. 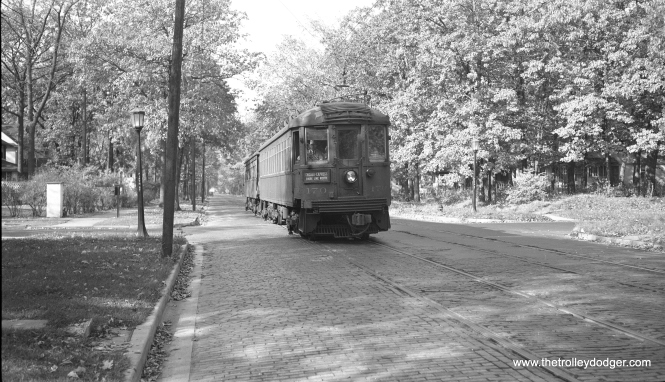 A two-car (170-709) Chicago Express “at speed” (although most likely moving very slowly) at Greenleaf and Fifth Avenues in Wilmette on the Shore Line Route, October 24, 1948. (Richard H. Young Photo) 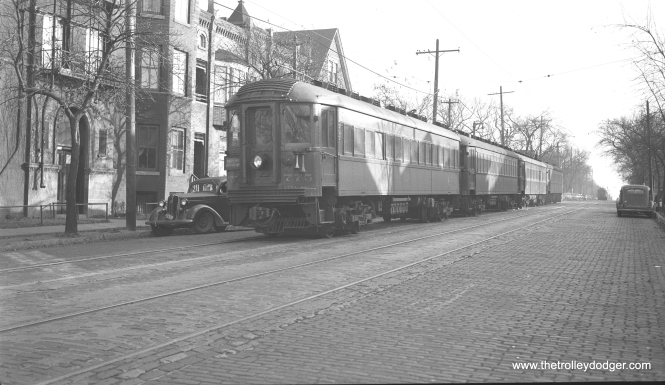 Car 775 heads up a northbound Milwaukee Limited on South 5th Street at West Greenfield Avenue on October 31, 1948. (Richard H. Young Photo, Super XX Film)
Joseph Hazinski adds, “One could board or exit a train at this intersection. I grew up near 6th and Greenfield and observed many a train pass this way. This was the location where I saw the last Southbound train depart Milwaukee on that cold night in January 1963. Someone was tolling the rear gong in the last car as it went by. It was too cold to cry.” 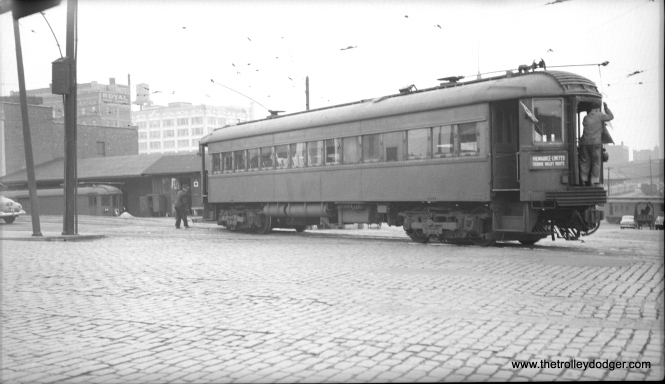 Coach 746 on 6th Street at Clybourn near the North Shore Line terminal in Milwaukee on May 12, 1945. This car was equipped with small diaphragms for use next to diners. (Richard H. Young Photo, Verichrome Film) 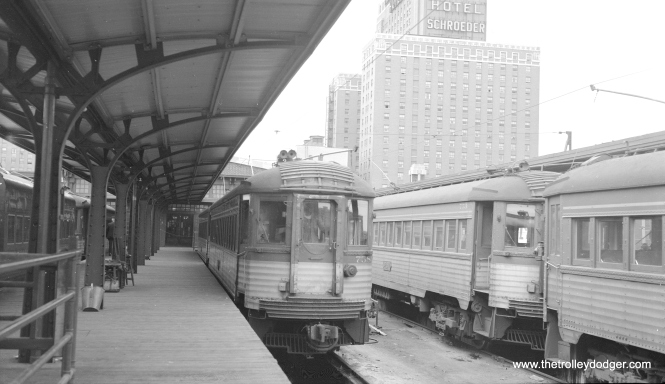 Silverliner 758 at the CNS&M terminal at 6th and Michigan in Milwaukee, circa 1960. (Richard H. Young Photo) 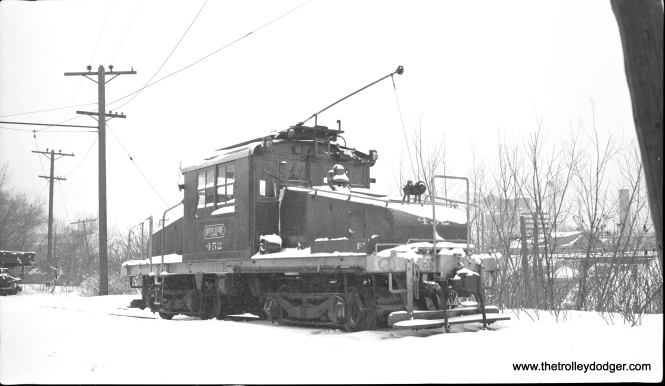 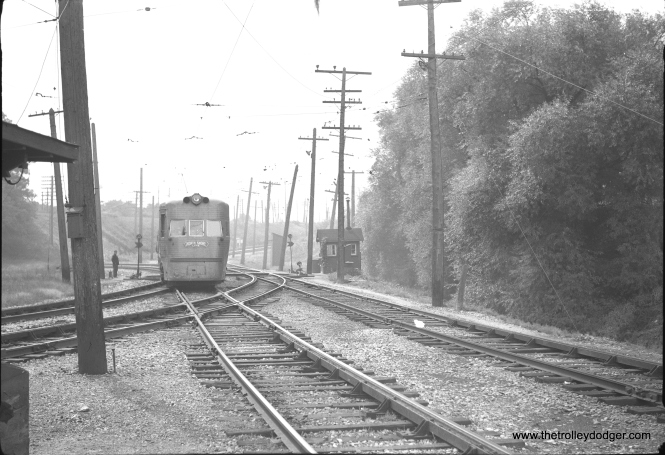 One of the two Electroliners at North Chicago Junction nortbound approaching Junction station. This picture was taken no later than 1955, as the Shore Line route via Sheridan Road to Waukegan is still present. 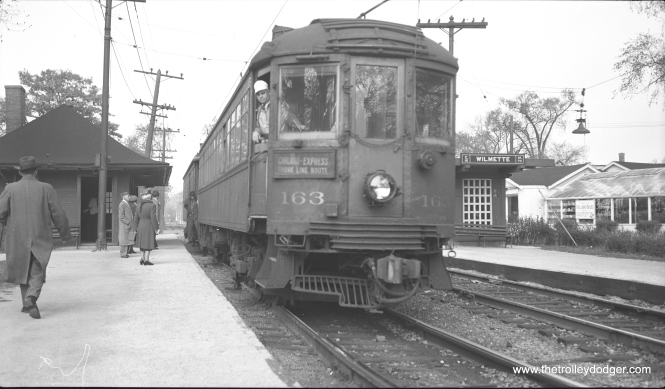 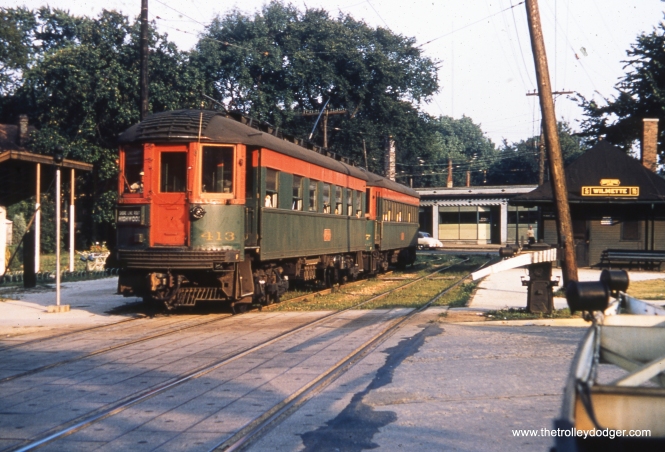 A northbound CNS&M Shore Line Route train, headed up by 413, at the downtown Wilmette station in June 1954. The Shore Line was abandoned not much more than one year later. We are looking to the southeast.

A current view of where the North Shore Line station in downtown Wilmette was once located. We are at the corner of Wilmette Avenue and Poplar Drive, looking to the southeast. The station was located in what is now the parking lot of a strip mall. The storefronts at rear are on Greenleaf Avenue, where the CNS&M Shore Line Route turned east for some slow street running before connecting up with the CRT/CTA at Linden Avenue. 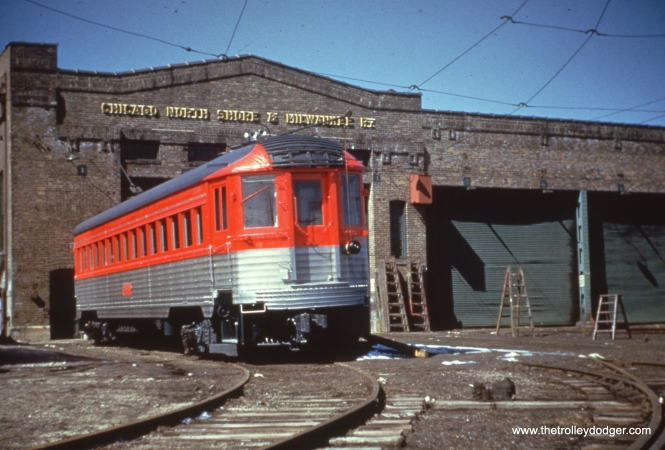 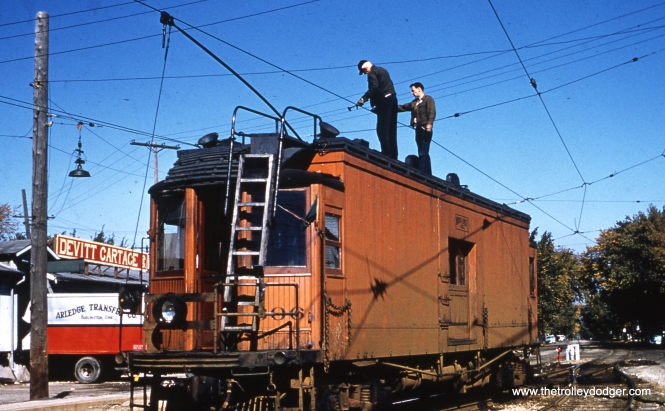 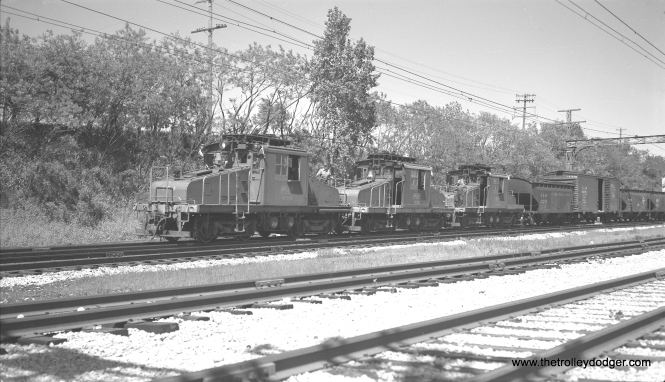 Electric locos 454, 452, and 453 head up a southbound freight train that will soon switch off from the Skokie Valley to the Mundelein branch at Lake Bluff in this June 3, 1960 scene. (Richard H. Young Photo) 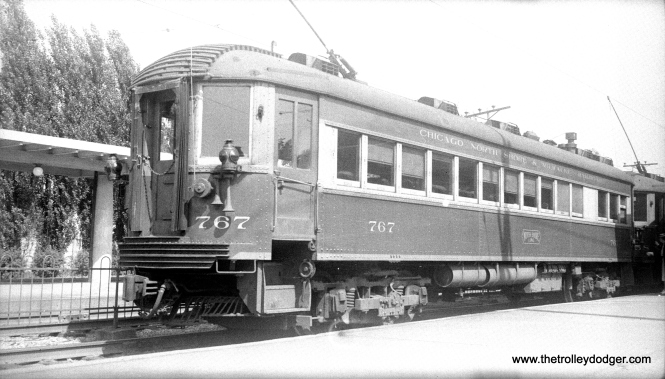 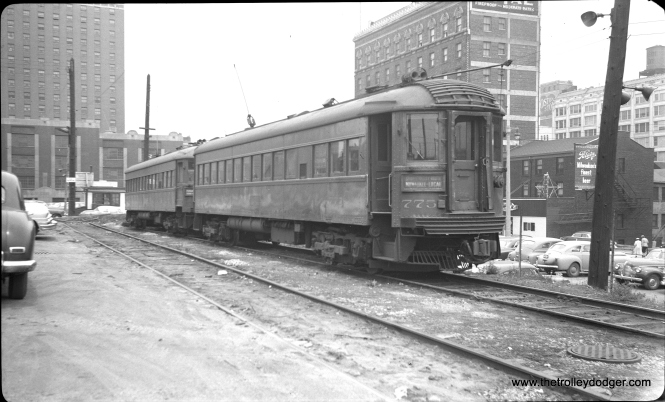 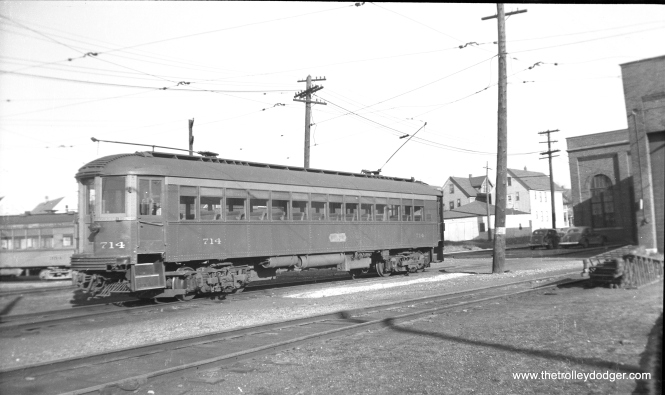 Car 714 at the Harrison shops in Milwaukee in January 1950. This car, built by Cincinnati Car Company in 1926, operates now at the Illinois Railway Museum. (Charles K. Willhoft Photo) 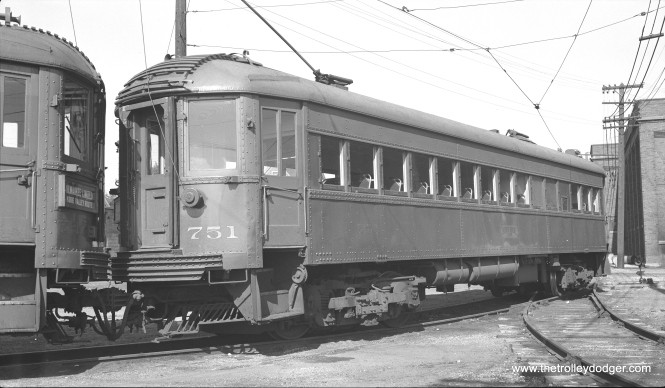 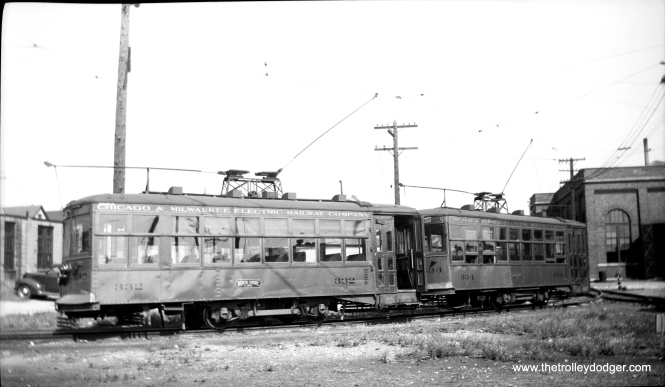 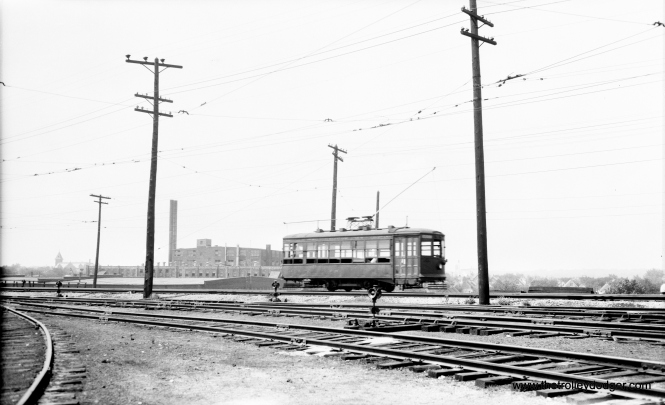 A Birney “at speed” near the Harrison shops, probably in the late 1940s. 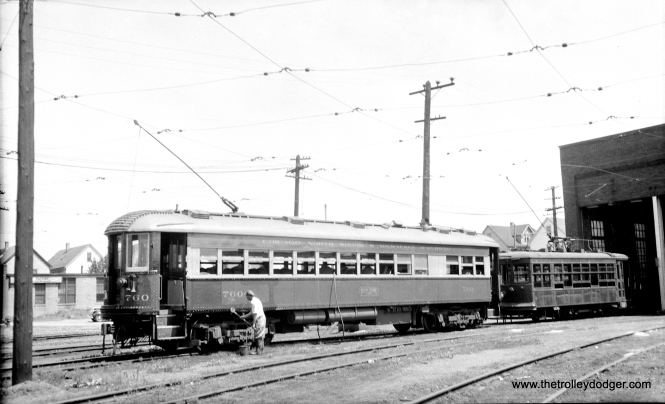 CNS&M 760 and a Birney streetcar at Harrison shops in Milwaukee. Looks like the 760 is being cleaned. 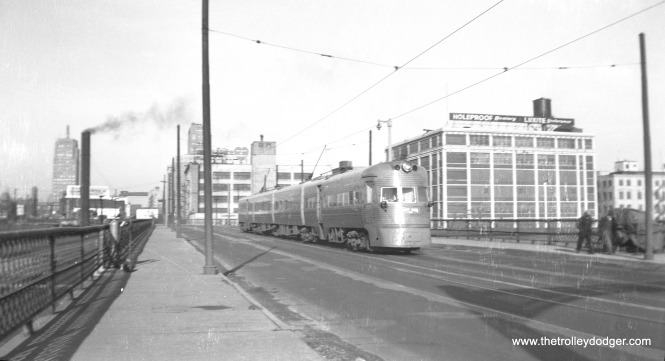 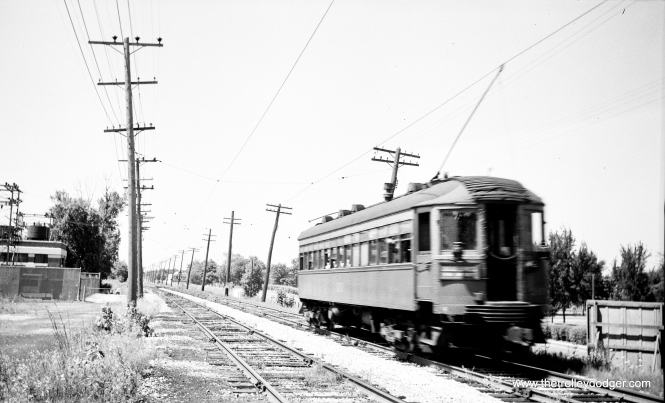 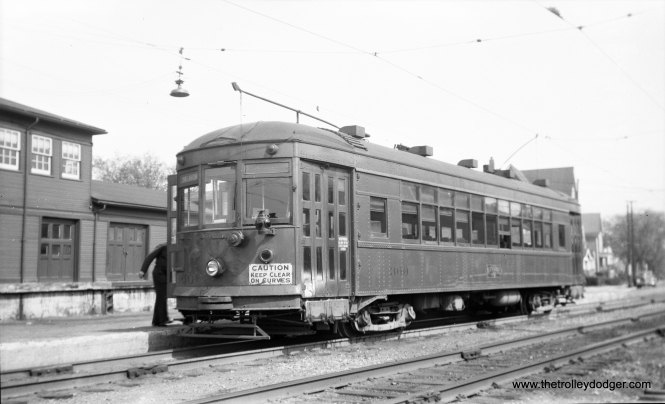 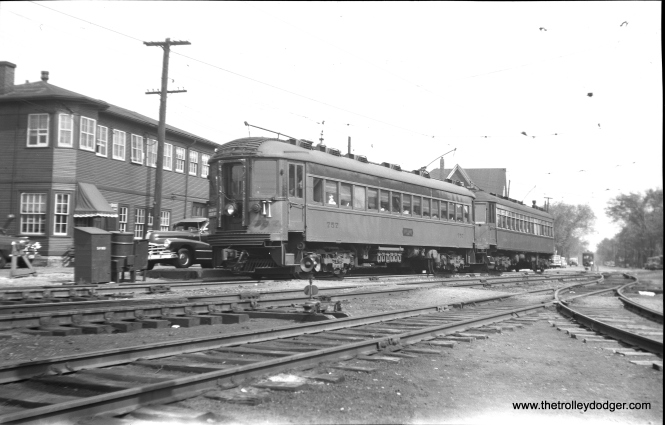 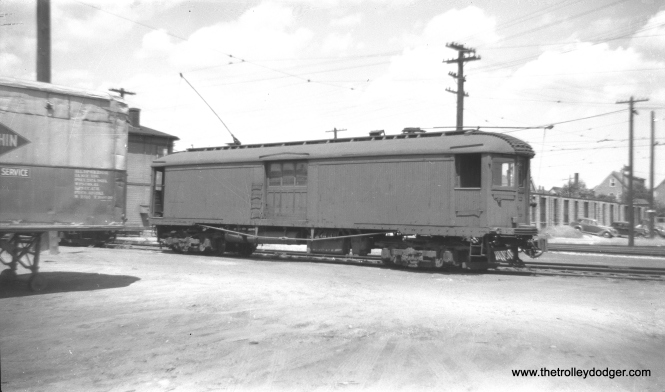 Merchandise dispatch car 228 at Harrison Street, Milwaukee, on July 17, 1947. This car is now preserved at the East Troy Electric Railroad in Wisconsin. 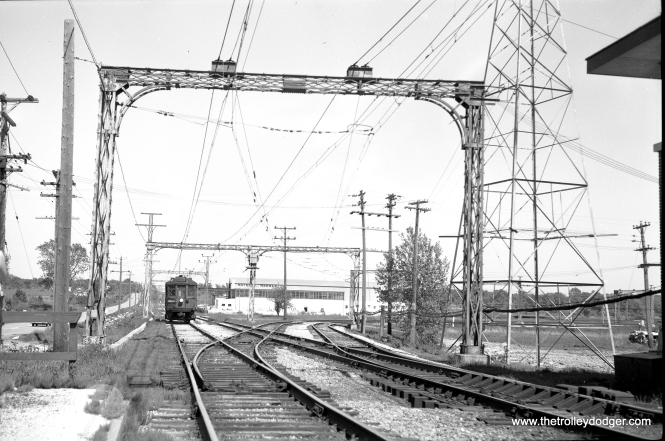 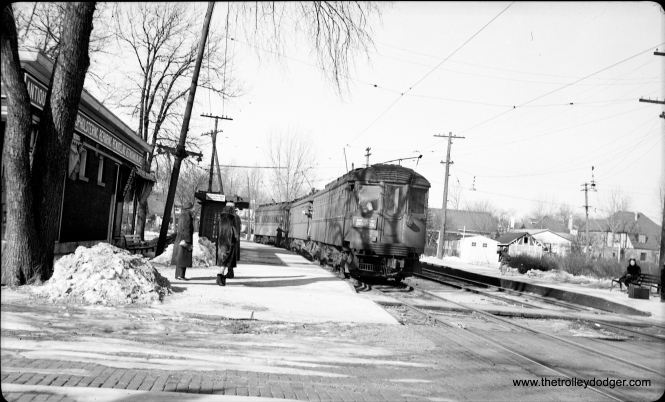 CNS&M 168 heads up a three-car Chicago Local on the Shore Line Route, stopping at Linden Avenue in Wilmette. The date is February 11, 1939 and we are looking north. 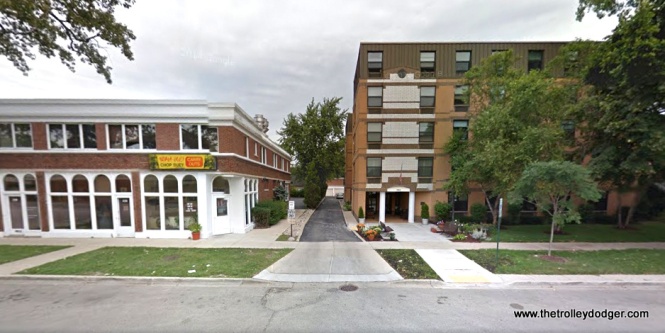 The same location today. Not sure if the building at left incorporates any of the old building seen in the 1939 picture.