The throngs of people in this June 1926 photograph were attending the Catholic Church’s 28th International Eucharistic Congress in Mundelein. Note the variety of rail cars being used to move the masses. After the Congress ended, ridership on the North Shore Line’s Mundelein-Libertyville branch was sparse enough that service was provided by a single city streetcar.

As this is Easter weekend, here is a veritable “Easter Parade” of Illinois traction pictures for your enjoyment. No matter what your religious preference may be, we hope that you will not pass over them.

CTA 1767, signed for Route 58 – Ogden, is actually heading east on Randolph at Green Street in this early 1950s view.

CSL 5644 is on Lincoln Avenue and signed to go to both Riverview Park and Harrison and State. 5644 was known as a Brill-American-Kuhlman car. Don’s Rail Photos says, “5622 thru 5650 were built by Brill in 1909, #16952, for Southern Street Ry which was a subsidiary.” (Southern Street Railway was one of the underlying companies that formed CSL.) Jim Huffman adds, “Probably a Riverview-Larrabee or aka Lincoln-Riverview car. Route Western & Roscoe crossover (later a loop west side of Western), EB to Damen, SB to Belmont, EB to Lincoln, SB to Larrabee thence into Downtown. Ended Sept 1947. A shuttle bus service on Roscoe to the Lincoln Ravenswood station remained for many years. Clybourn was another route that also at times that loop on Western, Clybourn’s actual crossover was at Western, but tracks continued north onto Western with switches into that loop. Western NB short turn cars also used that loop. At times there were cars from three routes in that loop. There were not that many turn-around loops with that many routes.” (Joe L. Diaz Photo)

CSL 7005, still looking shiny, at the Madison-Austin loop. I would date this picture to circa 1937 as the paint has not yet dulled on the car.

The same buildings are across the street from the east side of the Madison-Austin loop even today. But the flow of vehicles through the loop has been reversed, compared to how it was in streetcar days. 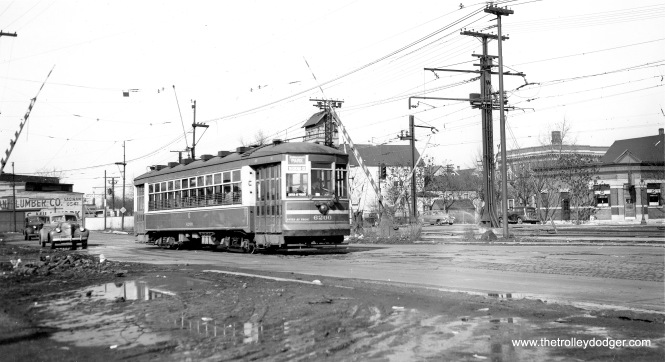 CSL 6200 on the Windsor Park line. This was a Multiple-Unit car. Don’s Rail Photos adds, “6200 was built by CSL in 1924. It was rebuilt as one man service in 1932.” Andre Kristopans adds, “One funny thing about this location, when the CTA started the automated stop announcements on the buses, the southbound stop, which is where the B&O crossing was a bit south of 83rd Place, is announced as “Commercial Avenue at Railroad crossing”, even though the tracks have been gone since the 1970’s sometime!” (Joe L. Diaz Photo) 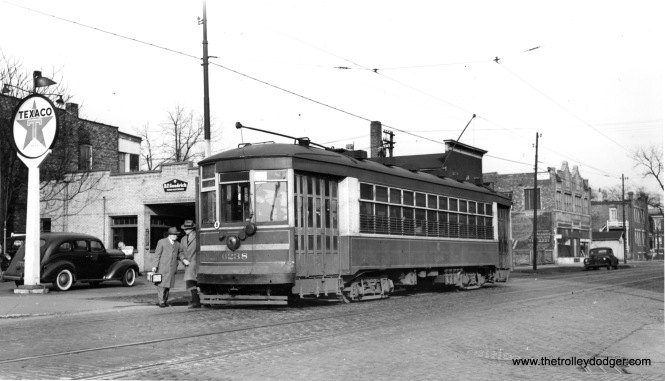 CTA trolley bus 9462 at the Cicero and Montrose loop. The McDonald’s at rear says 9 billion hamburgers have been sold, which would help date this photo to perhaps the mid-1960s. I believe this was the first McDonald’s in the City of Chicago. 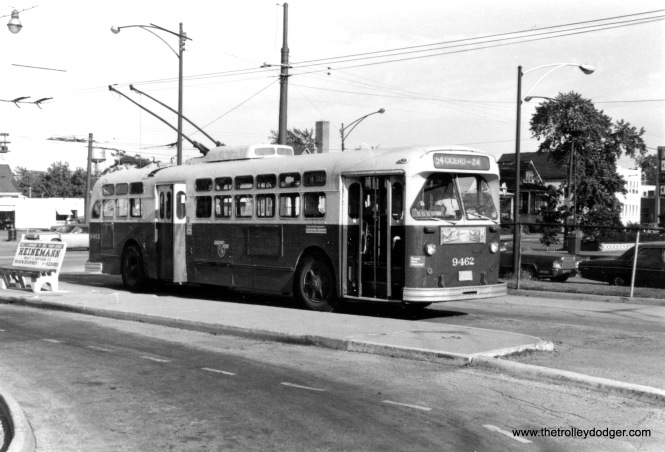 9462 at the Cicero and Montrose loop. 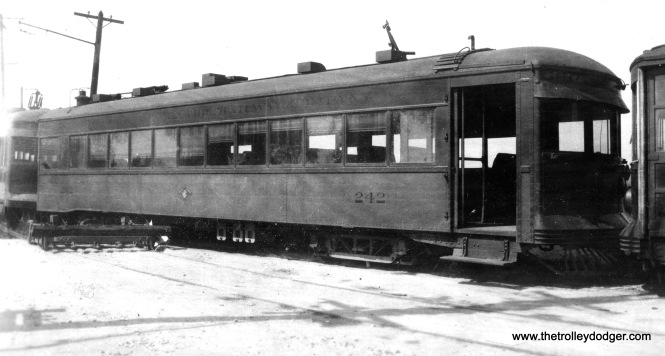 Chicago and Joliet Electric car 242, known as the “Ottawa,” after the 1934 abandonment. 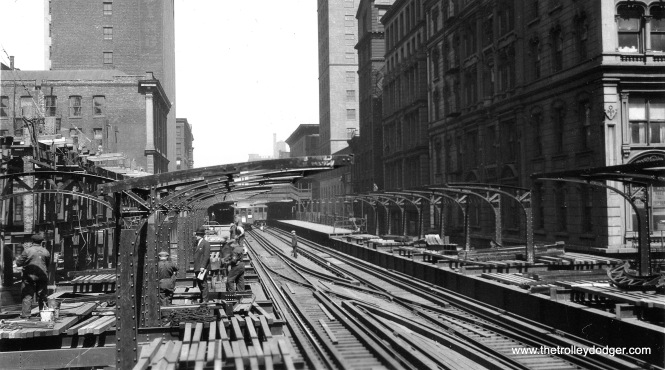 When I received this picture, it was identified only as being on the Wells Street leg of the Loop “L”. However, the construction work shown identifies it as Quincy and Wells, circa 1926-27. The “L” platforms are being extended with metal canopies, while work at left is underway on the Wells Street Terminal, which had an impressive three-story facade designed by Chicago Rapid Transit Company staff architect Arthur U. Gerber. We are facing north.

This is the old State and Van Buren station on the Loop “L”, looking east towards Tower 12. This station was closed in 1972 and demolished. It has since been replaced, due to its proximity to the Harold Washington Library.

A snowy scene at Wabash and Lake, site of the tightest curve on the “L”.

CTA gate car 1050 at Howard on the Evanston shuttle.

We originally ran another version of this photo in our post Chicago Rapid Transit Photos, Part Five (Spetember 26, 2016), where it was identified as Noyes Street in Evanston looking south. This version of the photo has less cropping and is dated August 10, 1928. Work is underway on elevating this portion of the Evanston “L”. 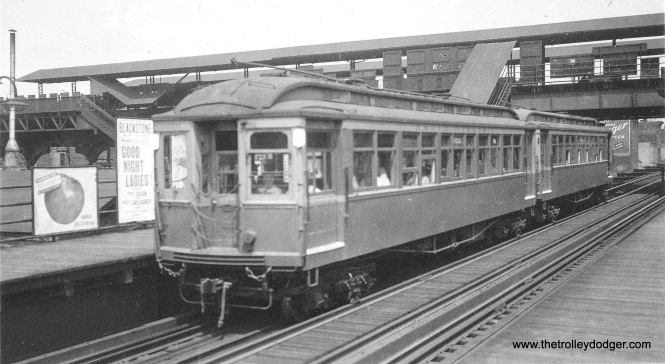 This is an inspection train at the Lake Street Transfer “L” station, which provided connections between the Lake Street “L”, on the lower level, and the Metropolitan above. The higher level station was closed in February 1951, when the Dearborn-Milwaukee subway opened.

CRT 1715 at Marion Street in Oak Park on the ground-level portion of the Lake Street “L”. It is signed as a local and is about to head east. This car was originally built by St. Louis Car Conpany in 1903 for the Northwestern Elevated Railway as car 715 and was renumbered to 1715 in 1913.

CTA 1780 heads up an “A” train at Marion Street in Oak Park. The ground-level portion of the Lake Street “L” was relocated onto the nearby C&NW embankment in 1962. This picture was probably taken between 1948 and 1955.

A CRT gate car on the Stock Yards branch of the “L”. 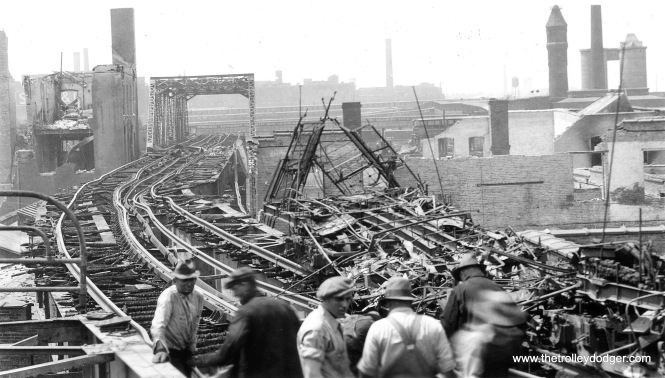 This picture, taken on May 21, 1934, shows how the CRT Stock Yards “L” branch was extensively damaged by fire two days earlier. Service west of Halsted did not resume until January 16, 1935. 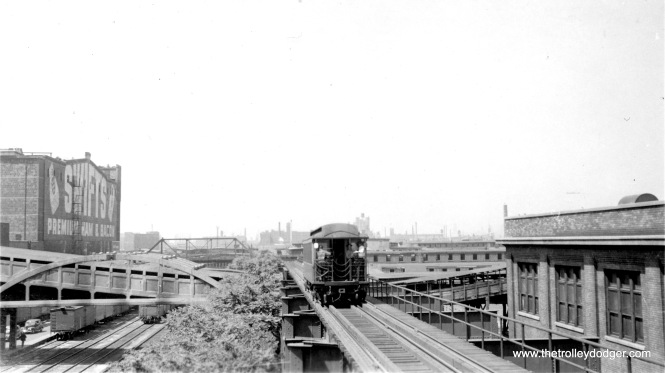 CRT 4318 at one of the ground-level stations on the west end of the Garfield Park line, headed for Westchester. The fencing at left may be related to construction work on the Congress Expressway, which resulted in this line being relocated.

CA&E 46 on the west end of a six-car train at Laramie Yards.

CA&E 424 loops at DesPlaines Avenue circa 1953-57, with a Chicago Great Western freight train in the background. We are looking north.

The CA&E off-street terminal at Aurora. There is a sign indicating this is the new terminal, opening on December 31st (1939). Since there are trains in the station,I would date this picture to circa 1940. Previously, trains ran on city streets in downtown Aurora. 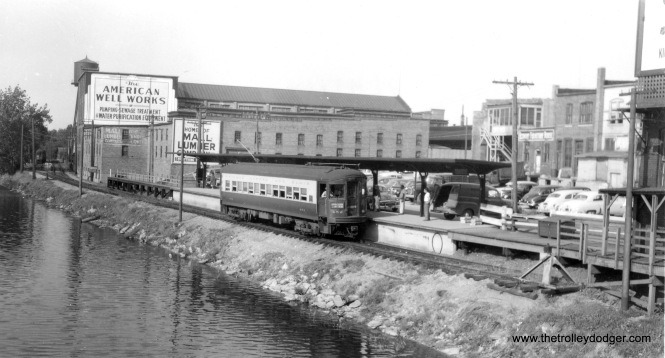 This view of the CA&E Aurora terminal is from the early 1950s.

The CA&E Wheaton station in the early 1950s. 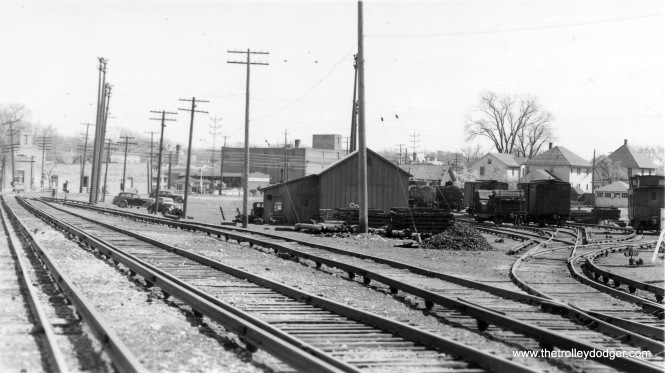 A view of the CA&E Wheaton Yards. 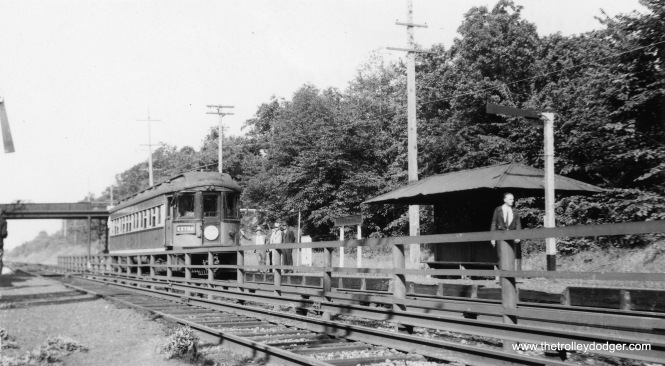 This picture shows CA&E car 425 at Glen Oak on a Central Electric Railfans’ Association fantrip. The date was September 2, 1940. 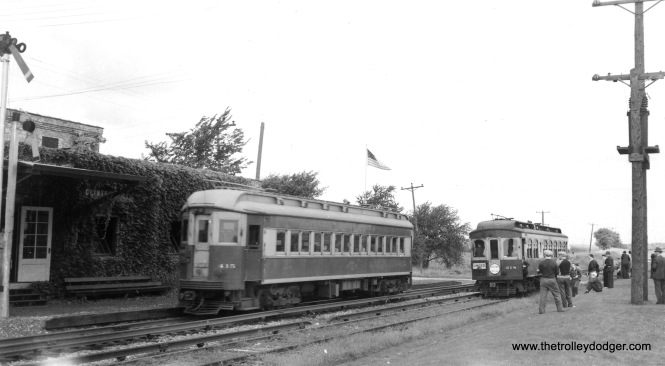 CA&E wood car 318, at right, is making a photo stop at Clintonville on the Elgin branch, during an early Central Electric Railfans’ Association fantrip. Presumably the 415 at left is a regular service car.

A close-up of the previous picture. 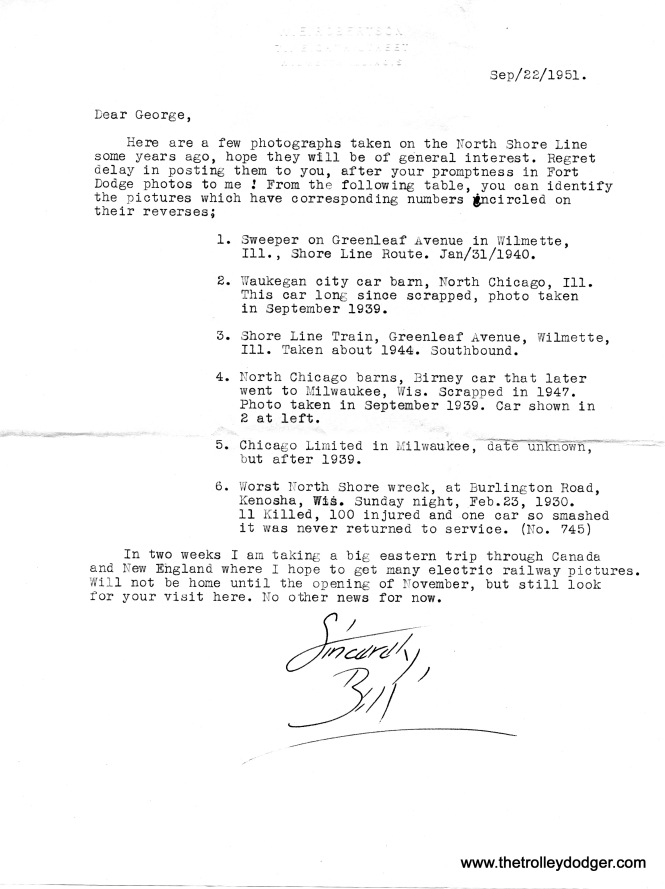 We recently acquired a letter and some photographs that were sent by the late William E. Robertson (1920-2003) of Wilmette, Illinois to George (Krambles?):

Here are a few photographs taken on the North Shore Line some years ago, hope they will be of general interest. Regret delay in posting them to you, after your promptness in (sending) Fort Dodge photos to me!

In two weeks I am taking a big eastern trip through Canada and New England where I hope to get many electric railway pictures. Will not be home until the opening of November, but still look for(ward to) your visit here. No other news for now.

Bill Robertson was part of the “Greatest Generation” of early railfans.  The letter does not say whether Mr. Robertson took these photos, but that’s a good inference.

Among other things, Bill Robertson was an inventor, and had a few patents in his name, including one for a “High-Speed Transportation System.” This must have had some utility, as it has been cited by several other later patents.

Chances are, Bill Robertson took all six pictures. The captions shown are his: 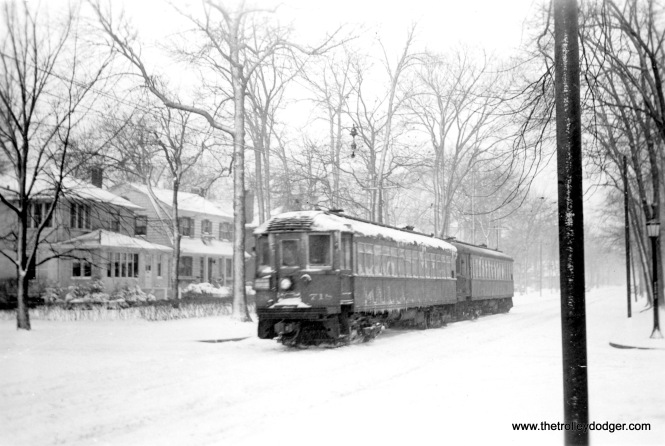 #5 Chicago Limited in Milwaukee, date unknown, but after 1939.

Another great post! I can’t imagine how you find the time to put these excellent posts together; I’m just glad you do! If your readers haven’t sat in front of a computer Photoshopping for hours on end to improve a single image they can’t possibly know how much work goes into your posts. I’m sending along some images of the Wheaton depot and shop areas.

Thanks for all the wonderful photos you have shared with our readers. You do a fantastic job! I appreciate your kind words. 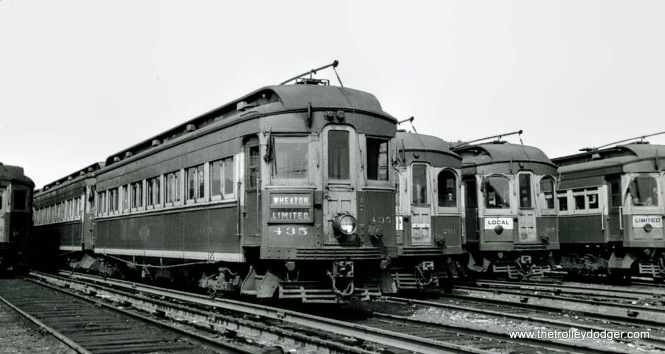 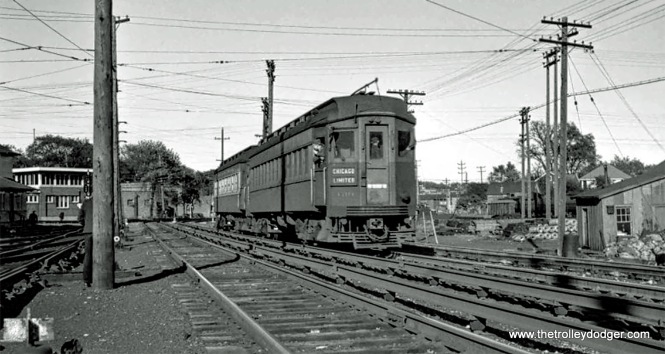 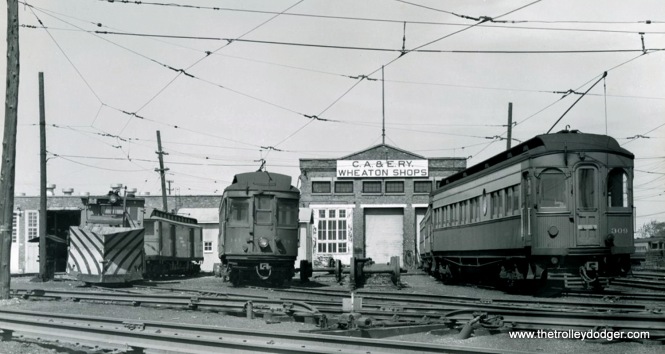 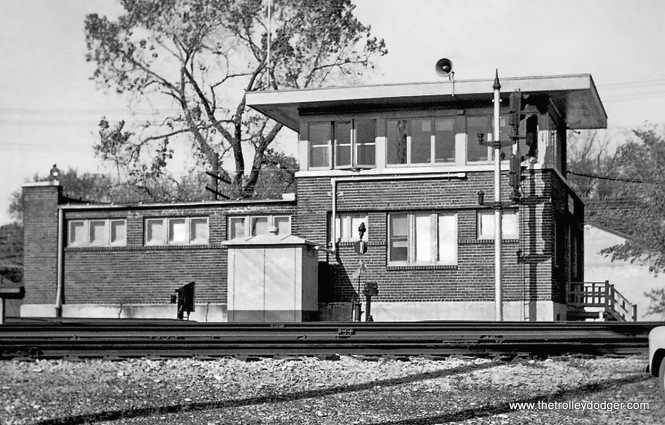 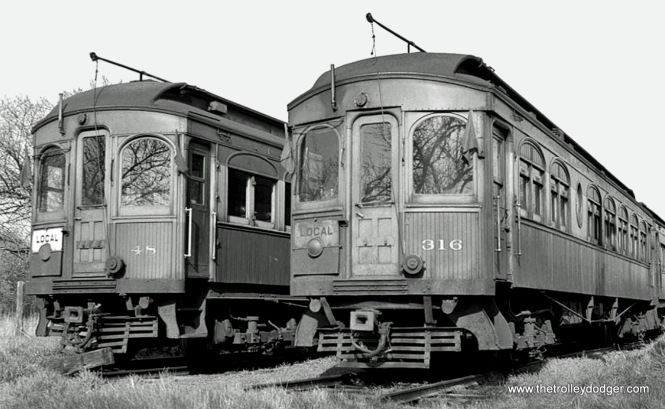 In 1962, the Chicago, North Shore & Milwaukee Railway petitioned the Interstate Commerce Commission to abandon the entire interurban. The railroad convinced the ICC that there was no hope to restore profitability in this era before government subsidies. The last trains ran in the early hours of January 21, 1963.

There were various groups trying to save the railroad. This document, published by the North Shore Line, tends to undercut various arguments made by these outside groups. An impression is conveyed that operations were already quite lean, and that further significant cost savings were not realistic.

In sum, the only thing that could have saved the interurban at this stage would have been subsidies. That shouldn’t be much of a surprise. The Chicago Transit Authority had reached the same conclusion in the late 1950s, and it is only due to such subsidies, staring in the mid-1960s, that we have any public transit to speak of in this country today.

At any rate, this makes fascinating reading for North Shore Line fans. 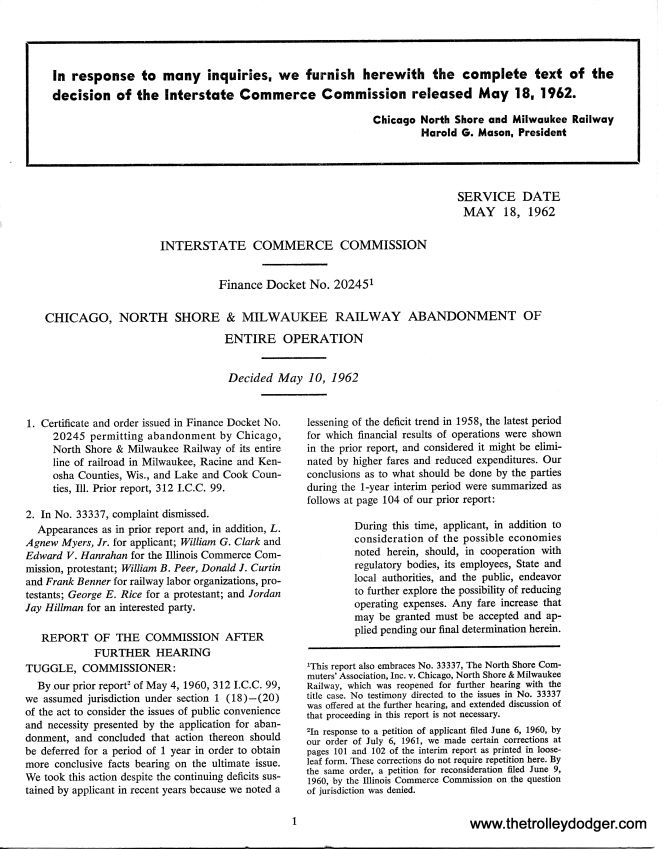 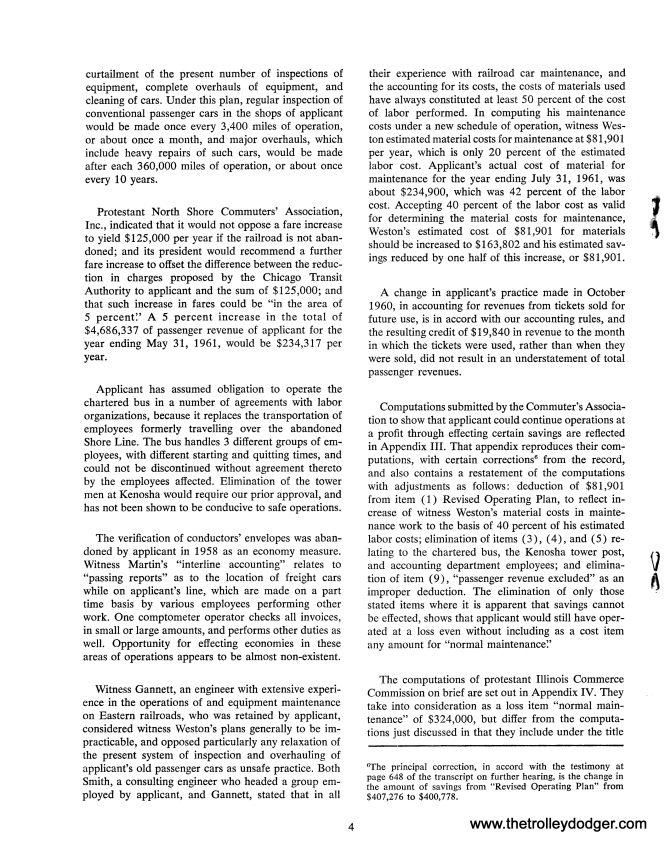 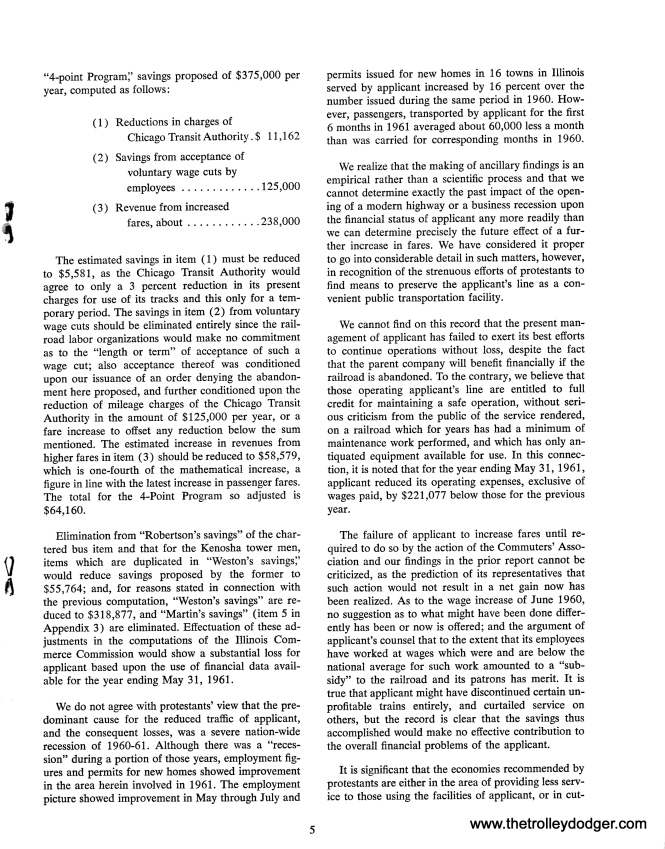 An Electric Transit Easter Parade cannot be complete without Pullman 441 from Dayton. Circa 1962. 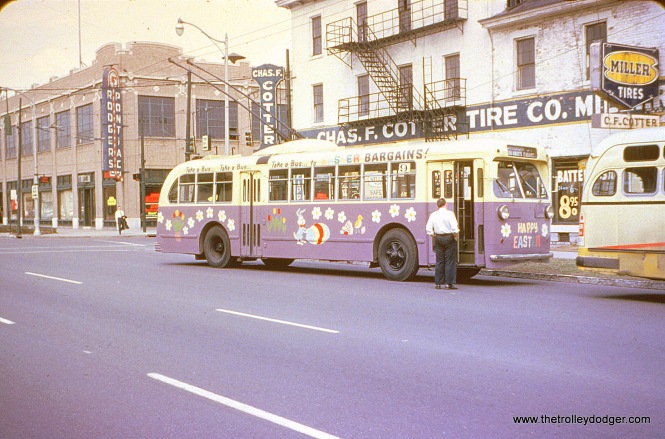 Work continues on our upcoming book Chicago Trolleys, which is now in the layout and proofreading stage. Lots of work has been done on the text, and the final selection of photos has been made. We will keep you advised as things progress.

This is our 180th post, and we are gradually creating a body of work and an online resource for the benefit of all railfans, everywhere. To date, we have received over 272,000 page views, for which we are very grateful.

You can help us continue our original transit research by checking out the fine products in our Online Store.

In order to continue giving you the kinds of historic railroad images that you have come to expect from The Trolley Dodger, we need your help and support. It costs money to maintain this website, and to do the sort of historic research that is our specialty.

Your financial contributions help make this web site better, and are greatly appreciated.

10 thoughts on “An Easter Parade of Traction”